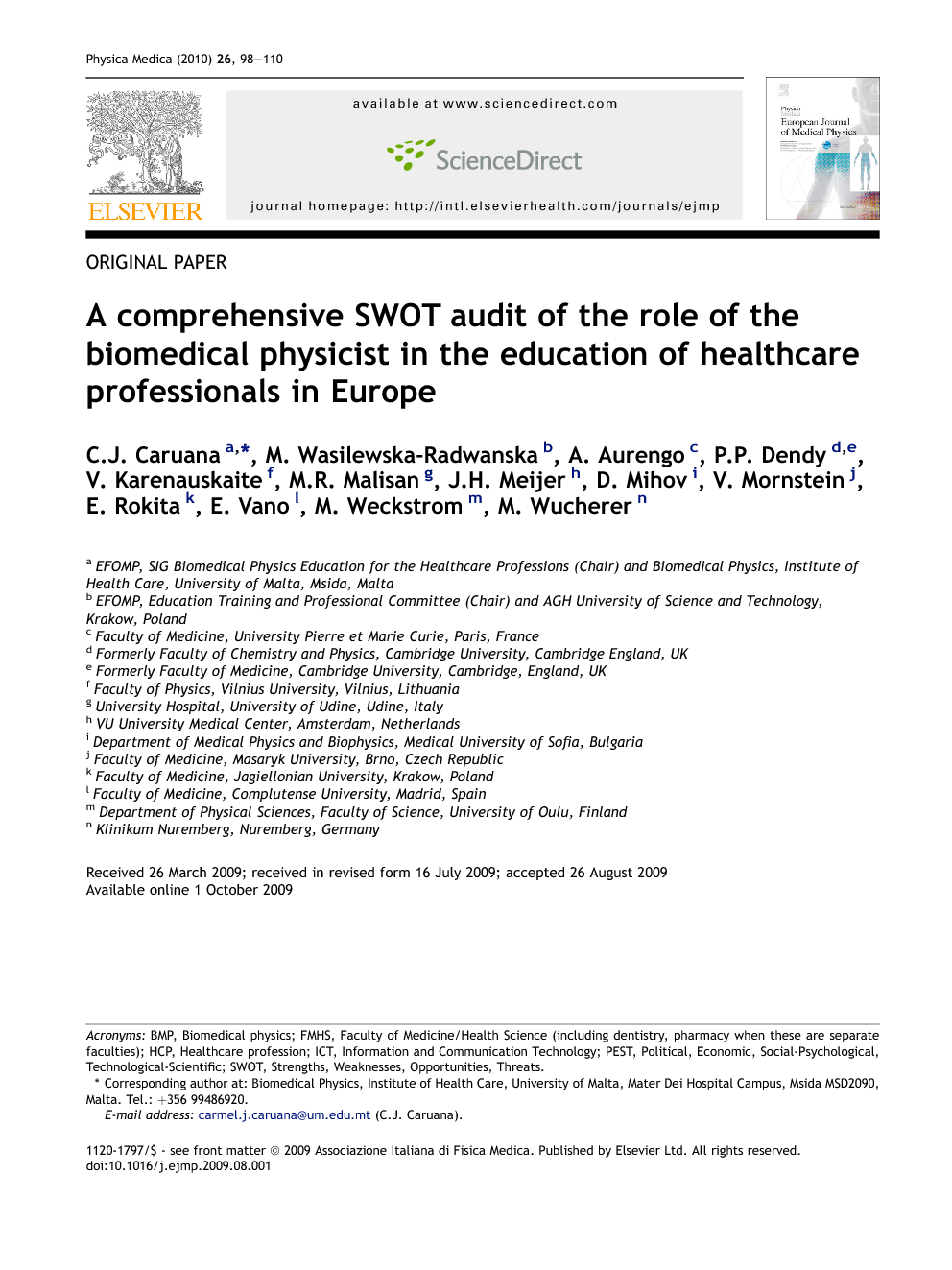 Although biomedical physics* (BMP) academics provide educational services to the healthcare professions* (HCP) within Faculties of Medicine/Health Science (FMHS) in the majority of universities in Europe, their precise role with respect to the education of the healthcare professions has not been appropriately defined nor studied in a systematic manner [1]. To address this issue we are conducting a research project with the aim of producing a strategic role development model* which can be used by members of the profession to advance this component of their role. Readers who are not familiar with the background to the project are referred to a previous article authored by our research group [1]. This set of articles is targeted specifically for those members of the profession whether in a faculty of medicine/health science or otherwise (e.g., department of physics in a faculty of science, hospital based medical physics department) providing such educational services to the healthcare professions. Materials and methods The fundamental research paradigm was practitioner research i.e., research carried out by members of a professional group to improve the practice of their profession [2]. The conceptual frameworks guiding the study were: • The open-systems model of organizations which emphasizes that role development occurs within an external environment (political, economic, social-psychological, technological-scientific) and that effective role development must take account of changes in that environment [3] • The marketing paradigm which is a planning philosophy that emphasizes that the success of an entity hinges on the production of a good fit between client expectations and the services offered. This means that BMP services will only be requested by HCP when they are perceived as being of value to them. The SWOT methodology [4] is today the standard methodology used for position audits and strategic planning and has been used extensively in higher education and healthcare [5], [6] and [7]. It is a two-step process: one first carries out an audit of SWOT (Strengths, Weaknesses, Opportunities, Threats) themes relevant to the development of the entity under study and then constructs a strategic development model by matching the internal strengths and weaknesses of that entity to external environmental opportunities and threats. This paper reports the results of a SWOT audit for the role of the biomedical physicist in the education of the healthcare professions in Europe. These SWOT themes will be used in future to provide input for a strategic role development model for the role. The research approach was qualitative, which is the most effective approach when one needs to uncover the range of themes (in this case SWOT themes) relevant to a specific issue. Qualitative research is inductive and thematic inferences are developed in cumulative increments based on the data acquired during each stage of the study. Data collection is stopped when no new significant themes are emerging [8]. Qualitative research has been criticized for its use of purposeful samples as opposed to random samples. However this type of criticism arises from a misconception of the main objective of this type of research – which is to uncover the range of themes relevant to an issue rather than the number of persons holding a particular point of view. This is particularly relevant in strategy studies where it is often the ‘early adopters’ who produce the new ideas. Internal strengths and weaknesses of the role were identified via a EU-wide multi-case-study survey of BMP departments and BMP components of HCP curricula. A purposeful sample of 120 faculties from all EU states was chosen following a preliminary internet survey. Since the purpose of the research was theme generation, cases were chosen according to whether they presented new themes or otherwise. The strategy was to start from the principal universities in each country and move also to other universities when the latter indicated new themes not found at the major universities. The number of faculties studied from each country is shown in Table 1. To increase the probability that all themes of significance would be detected the sample included faculties of medicine, dentistry, health science and pharmacy from traditional research-oriented comprehensive universities, specialized medical universities and the newer training-oriented universities (increasingly being called ‘Universities of Applied Sciences’). The main data collection technique was document analysis. Data were collected from web-sites, published documents, curricular materials and textbooks with the help of a customized thematic datasheet which included: country, university, FMHS data, BMP organization, BMP department location within the FMHS organizational structure, extent of BMP educator involvement in the compulsory and elective modules of the various HCP, content of BMP curricula, role expansion opportunities (HCP programme modules which would be enhanced through the involvement of a BMP educator), curriculum development themes within the FMHS impacting the role, and examples of good BMP curricular practice and research. Document analysis has several advantages for improving the validity and reliability of a study, namely: • Documents represent information which has been given thoughtful attention by the authors (particularly those open to public scrutiny such as online curricula and learning materials), • The technique is unobtrusive and avoids the biasing of responses or observations created by the researcher's presence during interviews and direct observation, • As written evidence it provides hard data.

The main conclusions of the SWOT audit are that: a) Many BMP educators consider their competences in the scientific principles underpinning the clinically-effective, evidence-based, safe, and economical use of biomedical devices and their competences regarding patient and occupational safety, risk assessment and protection with respect to physical agents (particularly when these are associated with devices) as their greatest assets (S2, S3). They believe that the major function of the role is to act as a ‘knowledge transfer bridge’ across the divide between biomedical device providers/researchers and the HCP. The BMP is the biomedical science professional who is comfortable using the terminologies of both medical device technology and medicine. The BMP educator must ‘translate’ technical information found in provider documentation and research literature into a form that can be useful to the HCP. This envisaged role for the BMP educator is shared by the HCP. b) In the past the role has been generally weakened in some countries either through neglect from role holders who have not practiced proper role-balance* amongst their various sub-roles or through lack of opportunity (W5). In the case of university based physicists the educator role has not been given its due importance owing to over-emphasis on the scientific research role to the exclusion of other roles such as the educator role. In the case of clinically based physicists there is a lack of opportunity when the educational role is considered subsidiary to the clinical service role or is not included in the remit of the physicist. c) However, the biomedical physicist's role in the education of the healthcare professions is blessed with many opportunities – in particular the European Higher Education Area and recognition of professional qualifications (O1), the many EC directives (O3), the need for healthcare technology assessment (O4), the ever increasing need for technically trained human resources (O5), importance of quality and patient safety issues (O6), increased awareness of occupational safety (O9) and the increasing number and sophistication of biomedical devices used by the HCP (O10) are key opportunities for the development of the role. Indeed the number of opportunities is quite extraordinary and if biomedical physicists rise to the challenge a good future for the role is achievable. In this article we have focused on the SWOT themes that need to be taken into consideration for future planning for the role – we have not as yet suggested solutions. However, the SWOT inventory will be used in future to provide input for a strategic role development model. A good strategic plan is essential in order that the opportunities for the role are grasped and not lost. The plan must also address existing threats. The significance or otherwise of these threats will depend on the local context. In those situations when such threats pose a significant risk to the BMP educator, strategic planning for the role becomes even more important.