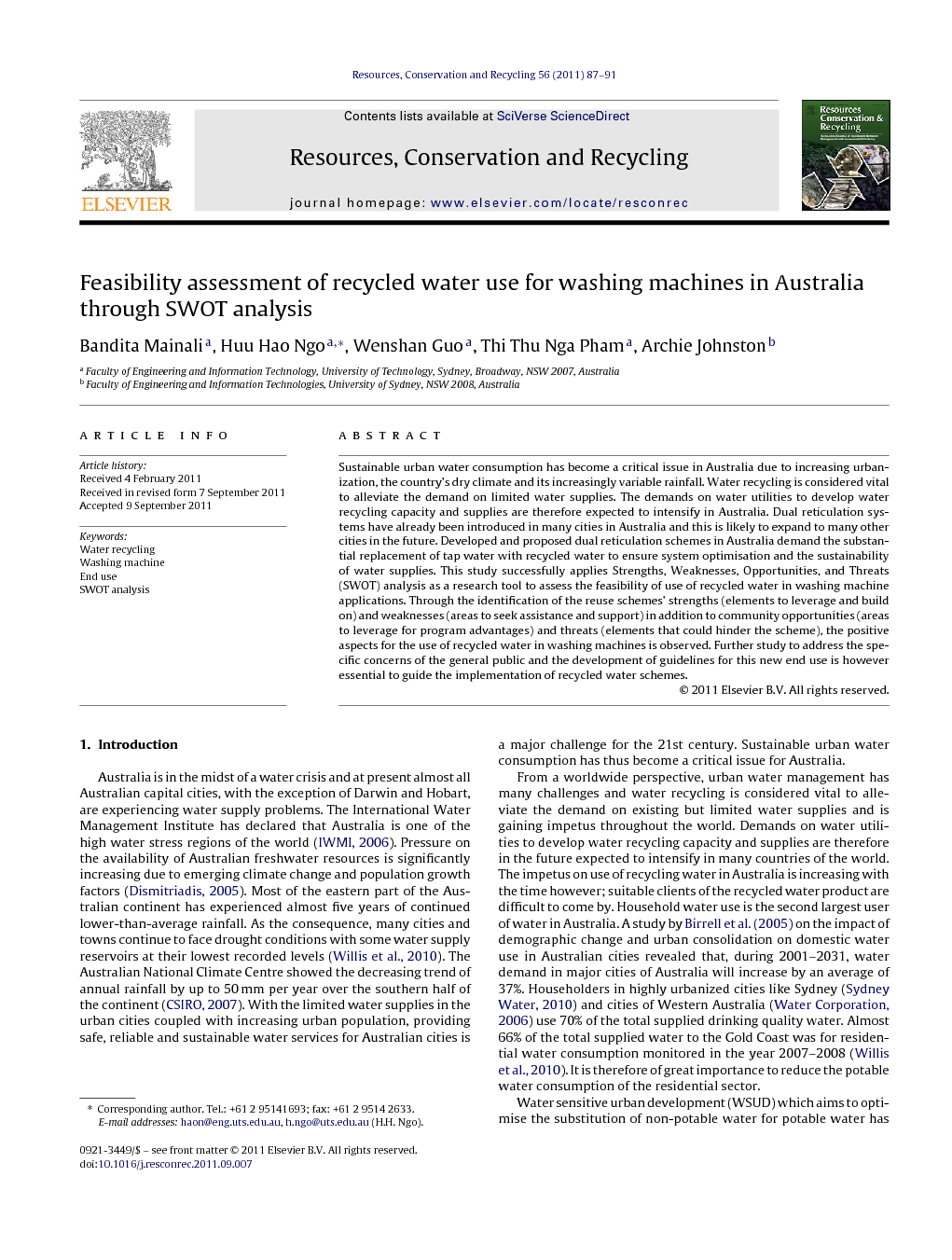 Sustainable urban water consumption has become a critical issue in Australia due to increasing urbanization, the country's dry climate and its increasingly variable rainfall. Water recycling is considered vital to alleviate the demand on limited water supplies. The demands on water utilities to develop water recycling capacity and supplies are therefore expected to intensify in Australia. Dual reticulation systems have already been introduced in many cities in Australia and this is likely to expand to many other cities in the future. Developed and proposed dual reticulation schemes in Australia demand the substantial replacement of tap water with recycled water to ensure system optimisation and the sustainability of water supplies. This study successfully applies Strengths, Weaknesses, Opportunities, and Threats (SWOT) analysis as a research tool to assess the feasibility of use of recycled water in washing machine applications. Through the identification of the reuse schemes’ strengths (elements to leverage and build on) and weaknesses (areas to seek assistance and support) in addition to community opportunities (areas to leverage for program advantages) and threats (elements that could hinder the scheme), the positive aspects for the use of recycled water in washing machines is observed. Further study to address the specific concerns of the general public and the development of guidelines for this new end use is however essential to guide the implementation of recycled water schemes.

Australia is in the midst of a water crisis and at present almost all Australian capital cities, with the exception of Darwin and Hobart, are experiencing water supply problems. The International Water Management Institute has declared that Australia is one of the high water stress regions of the world (IWMI, 2006). Pressure on the availability of Australian freshwater resources is significantly increasing due to emerging climate change and population growth factors (Dismitriadis, 2005). Most of the eastern part of the Australian continent has experienced almost five years of continued lower-than-average rainfall. As the consequence, many cities and towns continue to face drought conditions with some water supply reservoirs at their lowest recorded levels (Willis et al., 2010). The Australian National Climate Centre showed the decreasing trend of annual rainfall by up to 50 mm per year over the southern half of the continent (CSIRO, 2007). With the limited water supplies in the urban cities coupled with increasing urban population, providing safe, reliable and sustainable water services for Australian cities is a major challenge for the 21st century. Sustainable urban water consumption has thus become a critical issue for Australia. From a worldwide perspective, urban water management has many challenges and water recycling is considered vital to alleviate the demand on existing but limited water supplies and is gaining impetus throughout the world. Demands on water utilities to develop water recycling capacity and supplies are therefore in the future expected to intensify in many countries of the world. The impetus on use of recycling water in Australia is increasing with the time however; suitable clients of the recycled water product are difficult to come by. Household water use is the second largest user of water in Australia. A study by Birrell et al. (2005) on the impact of demographic change and urban consolidation on domestic water use in Australian cities revealed that, during 2001–2031, water demand in major cities of Australia will increase by an average of 37%. Householders in highly urbanized cities like Sydney (Sydney Water, 2010) and cities of Western Australia (Water Corporation, 2006) use 70% of the total supplied drinking quality water. Almost 66% of the total supplied water to the Gold Coast was for residential water consumption monitored in the year 2007–2008 (Willis et al., 2010). It is therefore of great importance to reduce the potable water consumption of the residential sector. Water sensitive urban development (WSUD) which aims to optimise the substitution of non-potable water for potable water has been already introduced in Australia. Dual water supply systems are a major component of WSUD and have been activated in many cities of developed world. In Sydney, recycled water is currently provided for residential use in several suburbs including Rouse Hill, Sydney Olympic Park and Newington, and will be used in the future in Hoxton Park and Rope Crossing. In addition, as part of the Metropolitan Water Plan, the NSW Government will provide recycled water to 160,000 homes that are expected to be built in new suburbs in Sydney's North West and South West (Metropolitan Plan, 2006). In the period 2004–2005 compared with 2001–2002, Australian households experienced a ten-fold increase in the use of reused water (ABS, 2004/05). In the future, there is a high probability that the supply of recycled water in many Australian communities with dual water supply systems will be increased because of the increasing water shortage and rapidly spreading urbanization. Housing developments at Newhaven and Mawson Lakes in Adelaide, South Australia also featured dual pipe systems. The Aurora Estate in Melbourne and Pimpama Coomera in the Gold Coast have also commenced construction of dual water systems (Radcliffe, 2004 and Tjandraatmadja et al., 2009). Developed and proposed dual reticulation schemes in Australia demand more replacement of tap water with recycled water in Australian households for system optimisation and sustainability in water supply. However, the existing end uses of such schemes are very limited. Currently, garden irrigation, toilet/urinal flushing and car washing are the most popular end uses of the recycled water from dual reticulation systems. The United Nations Economic and Social Council released a policy in 1958 stating that, “No higher quality water, unless there is a surplus of it, should be used for a purpose that can tolerate a lower grade”. However, in many countries including Australia, potable quality water is typically used for laundry activities. The laundry use of recycled water has not been sufficiently investigated and researched in the past. Water efficiency in terms of washing machines has been the focus of many regulations and some significant improvements have been already achieved, including water rating of machines and subsidizing the cost of the more water efficient machines that are available to the general public (Water Corporation, 2006). The impetus for replacing the top loading style of washing machine by front loading options (as they are more water efficient) is one strategy implemented to fulfil this aim. In addition, the current persisting and increasing water stress impels us to learn from overseas experiences and to improve this efficiency even further. Recycled water for washing machines is believed to be more sustainable option and this study attempts to make use of SWOT analysis to assess the feasibility of this new end use of recycled water.