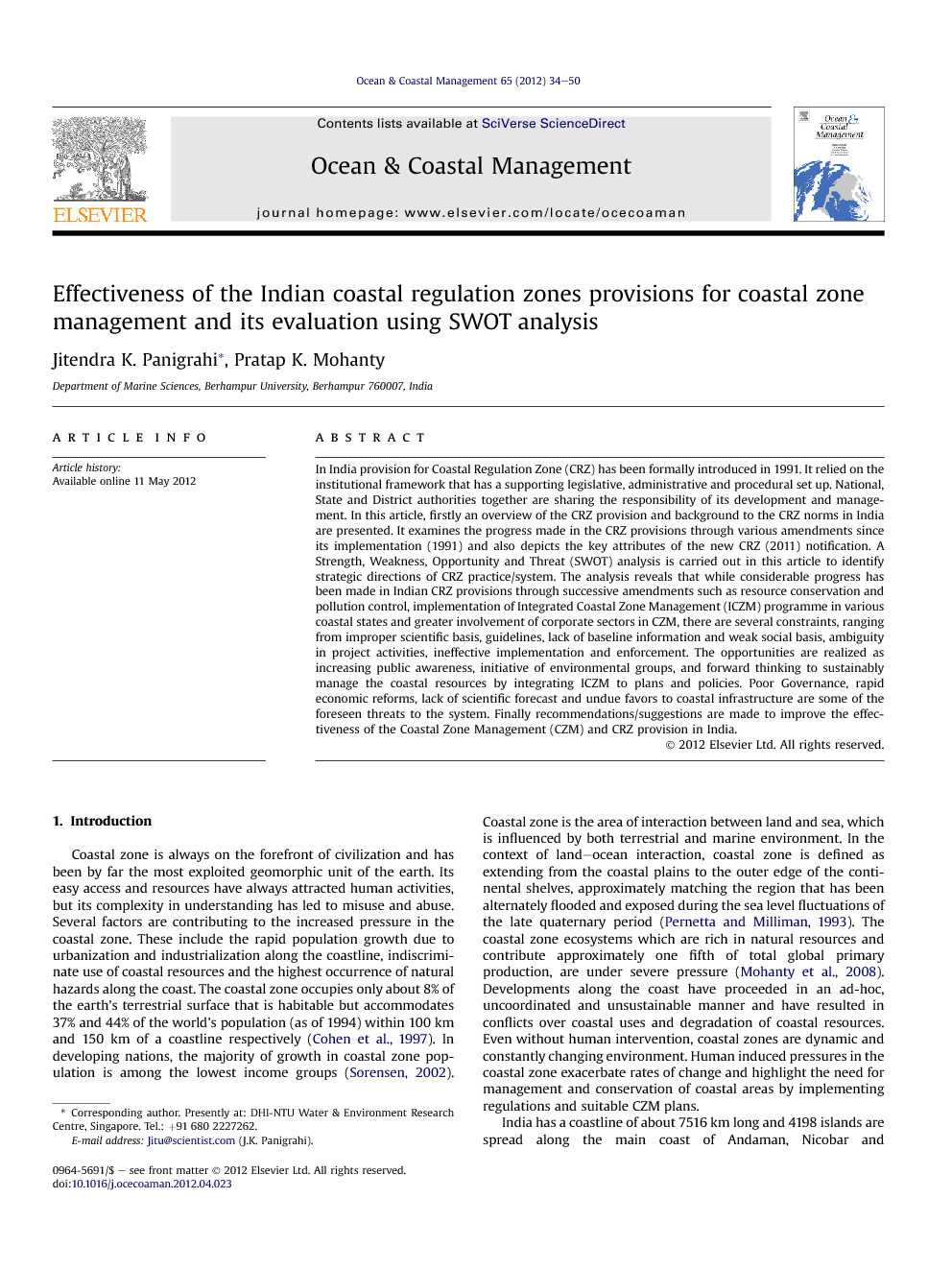 In India provision for Coastal Regulation Zone (CRZ) has been formally introduced in 1991. It relied on the institutional framework that has a supporting legislative, administrative and procedural set up. National, State and District authorities together are sharing the responsibility of its development and management. In this article, firstly an overview of the CRZ provision and background to the CRZ norms in India are presented. It examines the progress made in the CRZ provisions through various amendments since its implementation (1991) and also depicts the key attributes of the new CRZ (2011) notification. A Strength, Weakness, Opportunity and Threat (SWOT) analysis is carried out in this article to identify strategic directions of CRZ practice/system. The analysis reveals that while considerable progress has been made in Indian CRZ provisions through successive amendments such as resource conservation and pollution control, implementation of Integrated Coastal Zone Management (ICZM) programme in various coastal states and greater involvement of corporate sectors in CZM, there are several constraints, ranging from improper scientific basis, guidelines, lack of baseline information and weak social basis, ambiguity in project activities, ineffective implementation and enforcement. The opportunities are realized as increasing public awareness, initiative of environmental groups, and forward thinking to sustainably manage the coastal resources by integrating ICZM to plans and policies. Poor Governance, rapid economic reforms, lack of scientific forecast and undue favors to coastal infrastructure are some of the foreseen threats to the system. Finally recommendations/suggestions are made to improve the effectiveness of the Coastal Zone Management (CZM) and CRZ provision in India.

Coastal zone is always on the forefront of civilization and has been by far the most exploited geomorphic unit of the earth. Its easy access and resources have always attracted human activities, but its complexity in understanding has led to misuse and abuse. Several factors are contributing to the increased pressure in the coastal zone. These include the rapid population growth due to urbanization and industrialization along the coastline, indiscriminate use of coastal resources and the highest occurrence of natural hazards along the coast. The coastal zone occupies only about 8% of the earth's terrestrial surface that is habitable but accommodates 37% and 44% of the world's population (as of 1994) within 100 km and 150 km of a coastline respectively (Cohen et al., 1997). In developing nations, the majority of growth in coastal zone population is among the lowest income groups (Sorensen, 2002). Coastal zone is the area of interaction between land and sea, which is influenced by both terrestrial and marine environment. In the context of land–ocean interaction, coastal zone is defined as extending from the coastal plains to the outer edge of the continental shelves, approximately matching the region that has been alternately flooded and exposed during the sea level fluctuations of the late quaternary period (Pernetta and Milliman, 1993). The coastal zone ecosystems which are rich in natural resources and contribute approximately one fifth of total global primary production, are under severe pressure (Mohanty et al., 2008). Developments along the coast have proceeded in an ad-hoc, uncoordinated and unsustainable manner and have resulted in conflicts over coastal uses and degradation of coastal resources. Even without human intervention, coastal zones are dynamic and constantly changing environment. Human induced pressures in the coastal zone exacerbate rates of change and highlight the need for management and conservation of coastal areas by implementing regulations and suitable CZM plans. India has a coastline of about 7516 km long and 4198 islands are spread along the main coast of Andaman, Nicobar and Lakshadweep group. It has 2.02 million sq. km area of Exclusive Economic Zone (EEZ). The geomorphology of the coastline is dominated by delta processes. The east and west coasts of India comprise a wide variety of diverse habitats and ecosystems. These include estuaries, coral reefs, seagrass beds, mangrove swamps, creeks, back waters, lagoons to bays, cliffs, sandy and rocky beaches. The diverse habitat and ecosystems have important ecosystem functions and have both aesthetic and economic value. The thirteen Maritime Provinces (states and union territories) of India hold about 49% of the country's population. Over the years, growth of population, globalization of economy, technological development and increasing competition for the coastal resources have caused conflicts between the resource users. Consequently, policies, regulations and laws on coastal zone have been introduced. The late prime minister of India, Mrs. Indira Gandhi first made a directive in November 1981 “to keep beaches free from all kinds of artificial development at least up to 500 m from the high tide mark”. Thereafter, increased awareness among coastal managers and government departments of the enormous ecological and economic value of the coastal zone and the realization that a comprehensive and co-ordinated approach to coastal zone management is required led to the promulgation of the first Indian CRZ notification in 1991 (MoEF, 1991) The Ministry of Environment and Forest (MoEF), Government of India, in exercise of the powers conferred by subsection (1) and clause (v) of subsection (2) of section (3) of the Environment (protection) Act, 1986 for the first time on 19th February, 1991 promulgated the CRZ notification 1991 and declared the specific coastal stretches as CRZ and imposed restrictions on industries operations and processes in the CRZ (MoEF, 1991). The prime objective of the notification was to ensure livelihood security to the fisher communities and other local communities living in the coastal areas, to conserve and protect coastal stretches, its unique environment and its marine area and to promote development through sustainable manner based on scientific principles taking into account the dangers of natural hazards in the coastal areas. Since its promulgation in 1991, the CRZ 1991 notification was amended several times after receiving suggestions and objections received from the public and various stakeholders, and at the directions of the High courts and Supreme Court of India. Finally, the new notification, CRZ-2011 was issued on 6th January, 2011. The purpose of this article is to review the CRZ provisions of India and highlight the statutory, administrative and procedural arrangements in CRZ provision, report on the progress made from 1991 to 2011, identify areas still requiring attention and recommend ways of improving the effectiveness of CRZ provisions. SWOT (strength, weakness, opportunity and threat) analysis is made to achieve the said purposes.

The uniqueness and fragility of the Indian coastal environment and importance of these areas for economic development of the country is well recognized by the government as well as the civil society and scientific community dealing with coastal environment. But what is lacking is insufficient involvement of the scientific community in the governmental and inter-governmental programs and projects. Ineffectiveness of CRZ provisions in India is also due the motivations for economic development which often overtakes conservation and protection concerns and result in unrecoverable losses. To avoid these shortcomings, CRZ now operates through statutory, administrative and procedural framework involving central, state, district and village panchayat level agencies and tries to bring integration at all levels. Public awareness and human resources are essential prerequisites for initiating and implementing local and national ICZM programs. Also, effective CRZ policy and its implementation critically depend on the commitment of the people, Political Will, effective leadership at all levels, capacity building and networking of CRZ practitioners. Therefore, capacity building activities for the advancement of integrated coastal management at the national and regional levels should be strengthened. Besides, creation and functioning of decentralized networks aiming at cooperative efforts to improve coastal and marine management practices should be encouraged by the international programs and donor institutions. Regional projects that focus on training and education on ICZM should be given priority for financial support by the government (national/state) and other donor institutions. Progress and achievements in management schemes must be closely monitored and compliance of the coastal states with the regional legislation in general and with the ICZM Protocol in particular must be effectively enforced. Coastal and marine protected areas must be created and managed by using the ecosystem approach. Progress of maritime spatial planning and networks of coastal and marine protected areas would no doubt be effective developments to enhance the practice of coastal and marine conservation. Development of tools and techniques for coastal and marine management and generation of the essential data and information at the regional/sub-regional scales should be promoted.