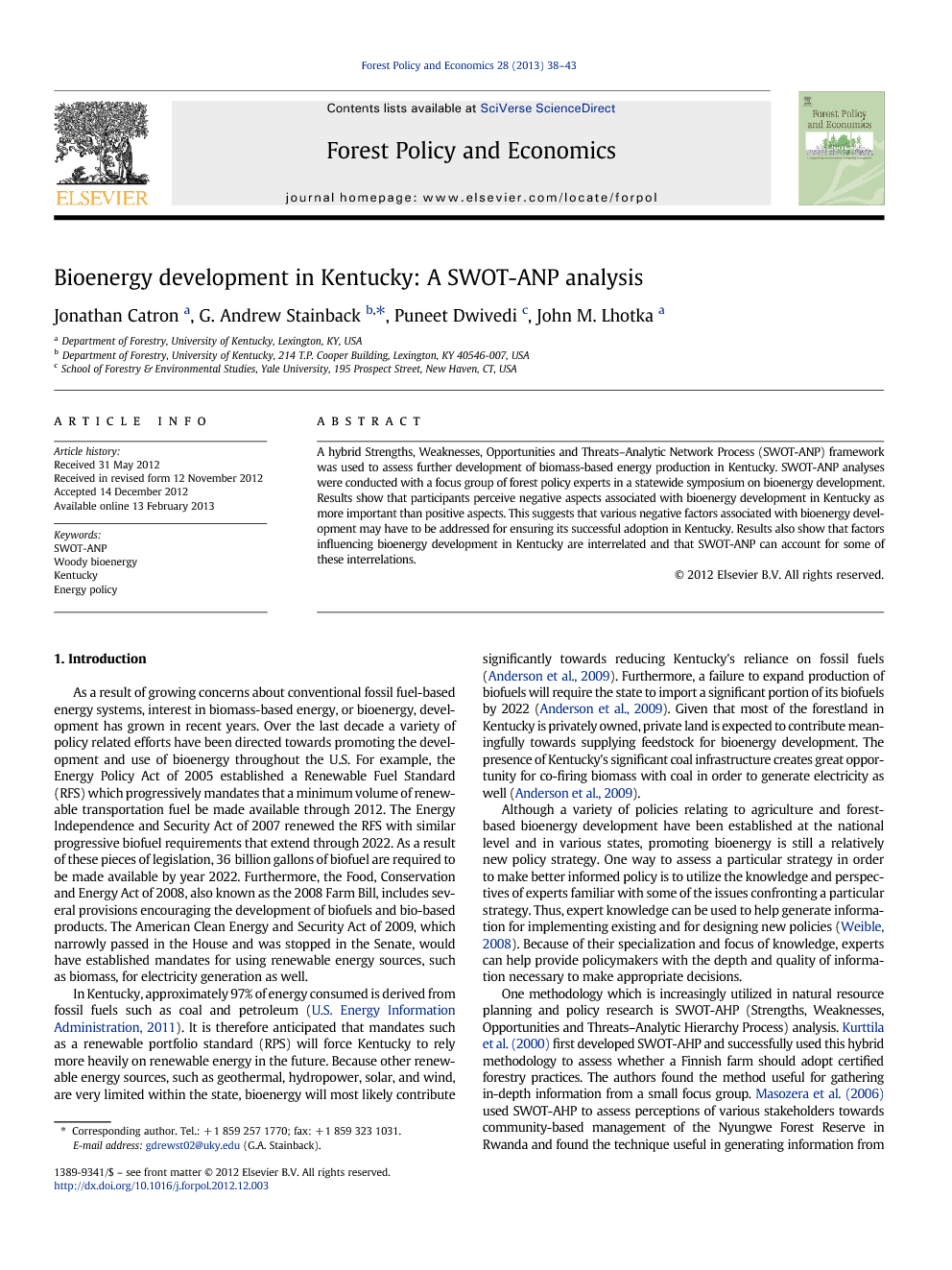 As a result of growing concerns about conventional fossil fuel-based energy systems, interest in biomass-based energy, or bioenergy, development has grown in recent years. Over the last decade a variety of policy related efforts have been directed towards promoting the development and use of bioenergy throughout the U.S. For example, the Energy Policy Act of 2005 established a Renewable Fuel Standard (RFS) which progressively mandates that a minimum volume of renewable transportation fuel be made available through 2012. The Energy Independence and Security Act of 2007 renewed the RFS with similar progressive biofuel requirements that extend through 2022. As a result of these pieces of legislation, 36 billion gallons of biofuel are required to be made available by year 2022. Furthermore, the Food, Conservation and Energy Act of 2008, also known as the 2008 Farm Bill, includes several provisions encouraging the development of biofuels and bio-based products. The American Clean Energy and Security Act of 2009, which narrowly passed in the House and was stopped in the Senate, would have established mandates for using renewable energy sources, such as biomass, for electricity generation as well. In Kentucky, approximately 97% of energy consumed is derived from fossil fuels such as coal and petroleum (U.S. Energy Information Administration, 2011). It is therefore anticipated that mandates such as a renewable portfolio standard (RPS) will force Kentucky to rely more heavily on renewable energy in the future. Because other renewable energy sources, such as geothermal, hydropower, solar, and wind, are very limited within the state, bioenergy will most likely contribute significantly towards reducing Kentucky's reliance on fossil fuels (Anderson et al., 2009). Furthermore, a failure to expand production of biofuels will require the state to import a significant portion of its biofuels by 2022 (Anderson et al., 2009). Given that most of the forestland in Kentucky is privately owned, private land is expected to contribute meaningfully towards supplying feedstock for bioenergy development. The presence of Kentucky's significant coal infrastructure creates great opportunity for co-firing biomass with coal in order to generate electricity as well (Anderson et al., 2009). Although a variety of policies relating to agriculture and forest-based bioenergy development have been established at the national level and in various states, promoting bioenergy is still a relatively new policy strategy. One way to assess a particular strategy in order to make better informed policy is to utilize the knowledge and perspectives of experts familiar with some of the issues confronting a particular strategy. Thus, expert knowledge can be used to help generate information for implementing existing and for designing new policies (Weible, 2008). Because of their specialization and focus of knowledge, experts can help provide policymakers with the depth and quality of information necessary to make appropriate decisions. One methodology which is increasingly utilized in natural resource planning and policy research is SWOT-AHP (Strengths, Weaknesses, Opportunities and Threats–Analytic Hierarchy Process) analysis. Kurttila et al. (2000) first developed SWOT-AHP and successfully used this hybrid methodology to assess whether a Finnish farm should adopt certified forestry practices. The authors found the method useful for gathering in-depth information from a small focus group. Masozera et al. (2006) used SWOT-AHP to assess perceptions of various stakeholders towards community-based management of the Nyungwe Forest Reserve in Rwanda and found the technique useful in generating information from a diverse group of stakeholders knowledgeable about the particular topic. Dwivedi and Alavalapati (2009) employed SWOT-AHP to assess perceptions of nongovernmental organizations, government officials, industry, and academia across the U.S. South towards forest biomass-based bioenergy development. They found that all the stakeholder groups recognized significant benefits associated with use of forest biomass for bioenergy development in the southern U.S. Despite the success and utility of SWOT-AHP, it has an important limitation in its assumptions. AHP assumes that each factor within its hierarchical framework operates independently from one another. While this may sometimes be the case, it is likely not true for many situations. For complex decisions and issues, such as bioenergy development, a methodology that incorporates interdependencies among factors might be more useful. The Analytic Network Process (ANP) provides a means by which the interdependencies among factors can be accounted for in assessing their relative importance (Saaty, 2004 and Yüksel and Dagdeviren, 2007). It therefore seems appropriate to integrate ANP with the SWOT framework in a similar manner that AHP was applied to SWOT. Some studies have used ANP to assess or solve various issues in a natural resource context. For example, Erdogmus et al. (2006) combined ANP with a Benefits, Costs, Opportunities, and Risks framework in order to determine the best fuel to be used for residential heating in Turkey. Kone and Buke (2007) similarly used ANP in combination with a Benefits, Costs, Opportunities, and Risks framework to ascertain the most sustainable combination of fuels to be used for Turkish electricity generation. Wolfslehner et al. (2005) used ANP and compared it with AHP in a study assessing some of the characteristics associated with sustainable forest management in Europe. They suggested that the network approach offered by ANP is more realistic for representing complex issues. Tran et al. (2004) utilized ANP in combination with a principal component analysis in order to systematically rank potentially threatened watersheds in the U.S. mid Atlantic region. The authors suggested that ANP and other similar methodologies could be valuable in policy-making. Combining SWOT with ANP has been conducted in only a very small number of studies. Azimi et al. (2011) used SWOT-ANP to analyze potential strategies for mining in Iran. Yüksel and Dagdeviren (2007) employed SWOT-ANP in choosing a strategy for a Turkish textile firm. In this study we employ the SWOT-ANP technique to assess the current bioenergy situation in Kentucky by building on the insight of forest policy experts. We look specifically at Kentucky which has a well established forest industry predominately based on hardwoods. We also explore how the relative importance of identified SWOT factors is dependent on each other.

Results from this study indicate that forest policy experts perceive that negative factors (weaknesses and threats) associated with agricultural and forest-based bioenergy production in Kentucky as more important than positive factors (strengths and opportunities). This suggests that some negative aspects of bioenergy development may need to be addressed by policy makers if bioenergy development is to move forward in Kentucky. This coincides with concerns that other studies cite. For instance, Anderson et al. (2009) mention that several issues such as risks to demand and risks to supply must be addressed. For the expert group, it appears that creating a stable or predictable policy environment would be a primary concern. This would ensure that the threats associated with uncertain future policies are mitigated. Furthermore, public and government support should be emphasized in policy. Other studies have similarly suggested that public awareness of bioenergy be increased and issues with consumer demand be addressed (Mayfield et al., 2007). Continuation of RFS and adoption of RPS would be two such mechanisms to encourage increased consumer demand. Future increases in fossil fuel prices were also found to be important. Thus, future high prices for fossil fuels, whether policy or market driven, are likely necessary for a robust bioenergy market. A policy that provides support for bioenergy to be price competitive with other forms of renewable energy might be desirable to mitigate the threats by competing energy sources. Results indicate that the policy environment is likely to be very important for the future development of bioenergy in Kentucky. Analysis of results from this study also suggests that interdependence among issues plays an important role in complex topics like bioenergy development. As these results show, global priority can change when dependency among SWOT categories is considered. Because administering SWOT-ANP requires little additional resources compared to SWOT-AHP, it seems that SWOT-ANP might be an appropriate technique for analyses of expert opinion. This technique, in the future, could also be extended to investigate the interdependencies between factors within a category.