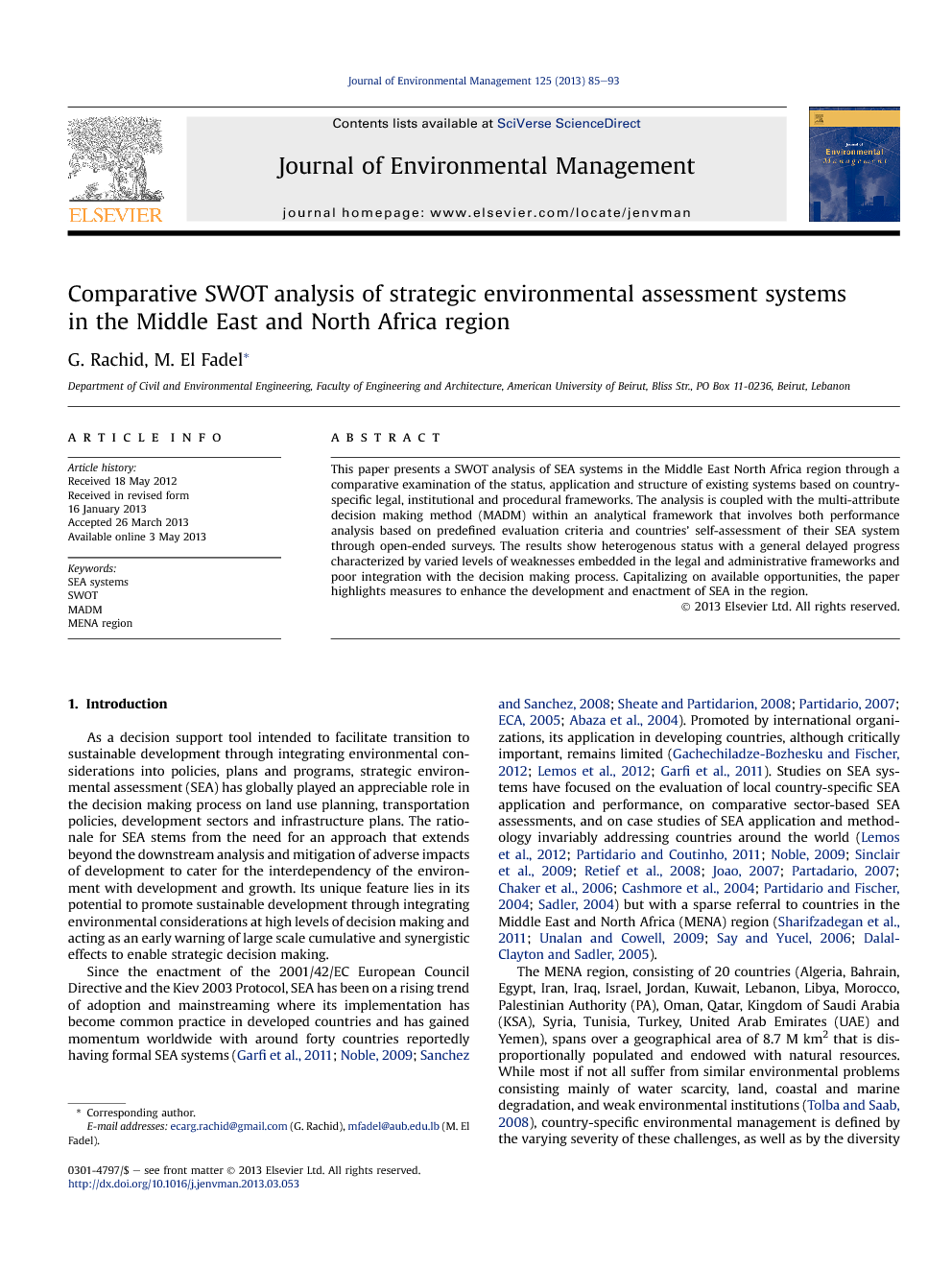 This paper presents a SWOT analysis of SEA systems in the Middle East North Africa region through a comparative examination of the status, application and structure of existing systems based on country-specific legal, institutional and procedural frameworks. The analysis is coupled with the multi-attribute decision making method (MADM) within an analytical framework that involves both performance analysis based on predefined evaluation criteria and countries' self-assessment of their SEA system through open-ended surveys. The results show heterogenous status with a general delayed progress characterized by varied levels of weaknesses embedded in the legal and administrative frameworks and poor integration with the decision making process. Capitalizing on available opportunities, the paper highlights measures to enhance the development and enactment of SEA in the region.

As a decision support tool intended to facilitate transition to sustainable development through integrating environmental considerations into policies, plans and programs, strategic environmental assessment (SEA) has globally played an appreciable role in the decision making process on land use planning, transportation policies, development sectors and infrastructure plans. The rationale for SEA stems from the need for an approach that extends beyond the downstream analysis and mitigation of adverse impacts of development to cater for the interdependency of the environment with development and growth. Its unique feature lies in its potential to promote sustainable development through integrating environmental considerations at high levels of decision making and acting as an early warning of large scale cumulative and synergistic effects to enable strategic decision making. Since the enactment of the 2001/42/EC European Council Directive and the Kiev 2003 Protocol, SEA has been on a rising trend of adoption and mainstreaming where its implementation has become common practice in developed countries and has gained momentum worldwide with around forty countries reportedly having formal SEA systems (Garfi et al., 2011; Noble, 2009; Sanchez and Sanchez, 2008; Sheate and Partidarion, 2008; Partidario, 2007; ECA, 2005; Abaza et al., 2004). Promoted by international organizations, its application in developing countries, although critically important, remains limited (Gachechiladze-Bozhesku and Fischer, 2012; Lemos et al., 2012; Garfi et al., 2011). Studies on SEA systems have focused on the evaluation of local country-specific SEA application and performance, on comparative sector-based SEA assessments, and on case studies of SEA application and methodology invariably addressing countries around the world (Lemos et al., 2012; Partidario and Coutinho, 2011; Noble, 2009; Sinclair et al., 2009; Retief et al., 2008; Joao, 2007; Partadario, 2007; Chaker et al., 2006; Cashmore et al., 2004; Partidario and Fischer, 2004; Sadler, 2004) but with a sparse referral to countries in the Middle East and North Africa (MENA) region (Sharifzadegan et al., 2011; Unalan and Cowell, 2009; Say and Yucel, 2006; Dalal-Clayton and Sadler, 2005). The MENA region, consisting of 20 countries (Algeria, Bahrain, Egypt, Iran, Iraq, Israel, Jordan, Kuwait, Lebanon, Libya, Morocco, Palestinian Authority (PA), Oman, Qatar, Kingdom of Saudi Arabia (KSA), Syria, Tunisia, Turkey, United Arab Emirates (UAE) and Yemen), spans over a geographical area of 8.7 M km2 that is disproportionally populated and endowed with natural resources. While most if not all suffer from similar environmental problems consisting mainly of water scarcity, land, coastal and marine degradation, and weak environmental institutions (Tolba and Saab, 2008), country-specific environmental management is defined by the varying severity of these challenges, as well as by the diversity of political systems and policy making processes that exist among countries exhibiting different levels of transparency, accountability, efficiency and effectiveness. The most recent published data on SEA systems in the MENA region by El-Fadl and El Fadel (2004) reported that no country has a SEA system. Since then, little is known about the nature and practice of emerging SEA systems in the MENA region where its need, as in any other developing region, capitalizes on its ability, along with other environmental planning and management tools, to incorporate environmental and social considerations into planning, otherwise usually ignored. Assessing existing structures and applications is an indispensible step to understand weaknesses and barriers as well as benefits and opportunities to properly proceed into mainstreaming effective SEA systems in the region. This paper evaluates weaknesses and strengths and potential threats and opportunities for SEA systems mainstreaming in the MENA region through a comparative SWOT analysis of legal, institutional, procedural and application frameworks while delineating future needs to enhance the effectiveness of SEA implementation in the region.

4. Conclusion and future outlook This study presents a first attempt at evaluating SEA systems in the MENA region. It examined through a comparative qualitative assessment the SEA systems' status, implementation and processes as well as through a quantitative assessment the individual country's strengths, opportunities, weaknesses and threats to pave efficient national roadmaps for effective implementation of SEA systems. Limited accessibility to country data on SEA systems as well as the low country response rate restricted the information database available for analysis; highlighting an important gap in the literature on SEA systems and implementation. Nevertheless, countries in the MENA region appear to be at different stages of SEA adoption and implementation, evolving towards effective SEA systems, albeit slowly, as is the case in many other locations worldwide. Capitalizing on available opportunities, MENA countries are encouraged to enhance the development and enactment of SEA legislation as well as to strengthen the institutional framework for SEA to compensate for the lack of effective, transparent and systematic planning processes. In this context, specificities in the SEA frameworks need to a) include screening and scoping stages in the procedural framework of SEAs and ensure all plans, programs and policies are subject to environmental assessment; b) initiate SEA application to policies through pilot studies as a step to mainstreaming; and c) promote the role of SEA as policy tool and not only an administrative procedure through effective tiering of SEA with planning and decision making processes.