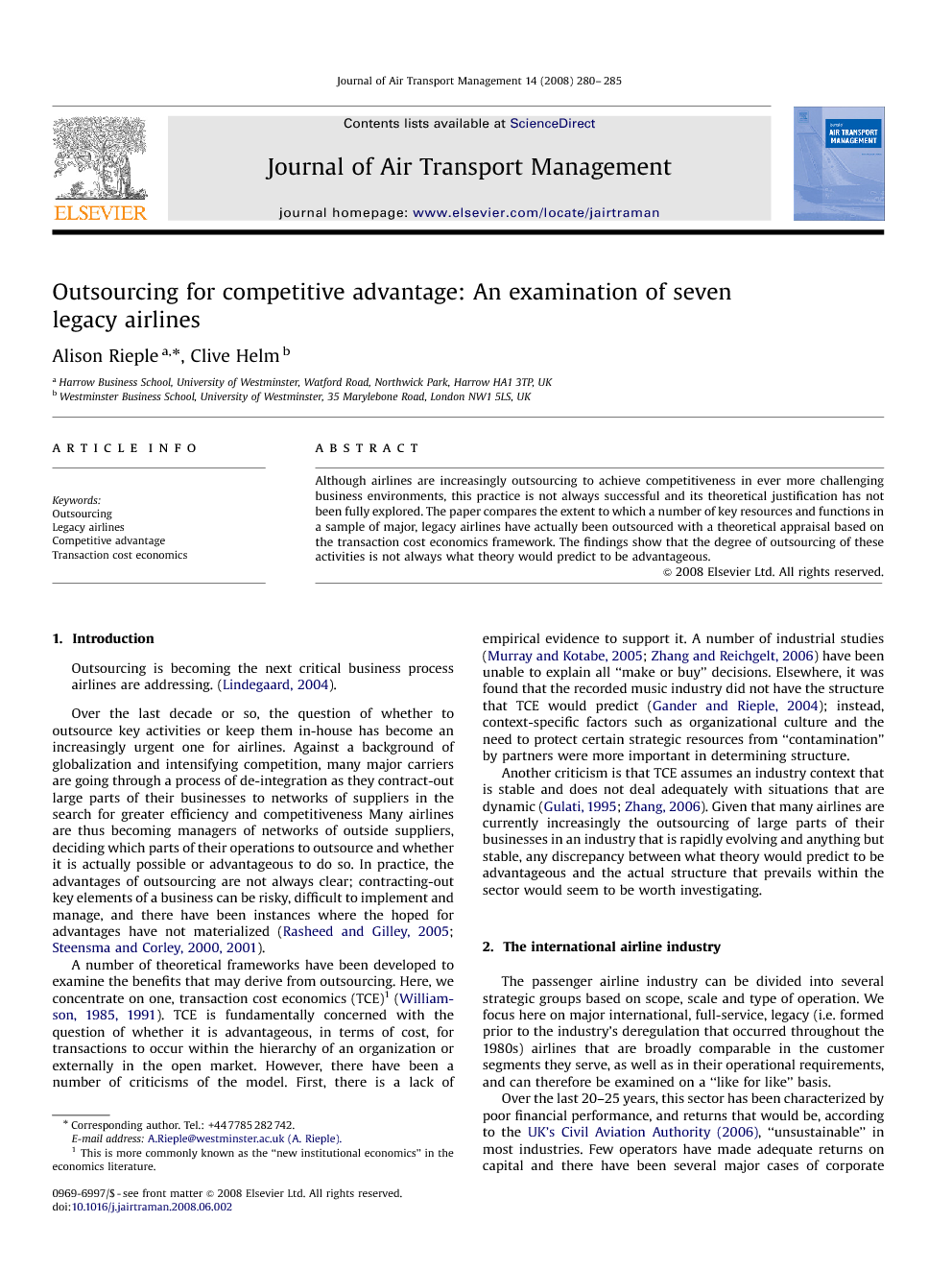 Although airlines are increasingly outsourcing to achieve competitiveness in ever more challenging business environments, this practice is not always successful and its theoretical justification has not been fully explored. The paper compares the extent to which a number of key resources and functions in a sample of major, legacy airlines have actually been outsourced with a theoretical appraisal based on the transaction cost economics framework. The findings show that the degree of outsourcing of these activities is not always what theory would predict to be advantageous.

Over the last decade or so, the question of whether to outsource key activities or keep them in-house has become an increasingly urgent one for airlines. Against a background of globalization and intensifying competition, many major carriers are going through a process of de-integration as they contract-out large parts of their businesses to networks of suppliers in the search for greater efficiency and competitiveness Many airlines are thus becoming managers of networks of outside suppliers, deciding which parts of their operations to outsource and whether it is actually possible or advantageous to do so. In practice, the advantages of outsourcing are not always clear; contracting-out key elements of a business can be risky, difficult to implement and manage, and there have been instances where the hoped for advantages have not materialized (Rasheed and Gilley, 2005; Steensma and Corley, 2000 and Steensma and Corley, 2001). A number of theoretical frameworks have been developed to examine the benefits that may derive from outsourcing. Here, we concentrate on one, transaction cost economics (TCE)1 (Williamson, 1985 and Williamson, 1991). TCE is fundamentally concerned with the question of whether it is advantageous, in terms of cost, for transactions to occur within the hierarchy of an organization or externally in the open market. However, there have been a number of criticisms of the model. First, there is a lack of empirical evidence to support it. A number of industrial studies (Murray and Kotabe, 2005; Zhang and Reichgelt, 2006) have been unable to explain all “make or buy” decisions. Elsewhere, it was found that the recorded music industry did not have the structure that TCE would predict (Gander and Rieple, 2004); instead, context-specific factors such as organizational culture and the need to protect certain strategic resources from “contamination” by partners were more important in determining structure. Another criticism is that TCE assumes an industry context that is stable and does not deal adequately with situations that are dynamic (Gulati, 1995; Zhang, 2006). Given that many airlines are currently increasingly the outsourcing of large parts of their businesses in an industry that is rapidly evolving and anything but stable, any discrepancy between what theory would predict to be advantageous and the actual structure that prevails within the sector would seem to be worth investigating.

Airlines may choose to outsource because external specialists have greater access to superior cost drivers like low-cost locations, expertise, learning and scale economies; another potential benefit is the maximizing of flexibility. Jones and Hesterly (1997) suggest that “under conditions of demand uncertainty, firms disaggregate into autonomous units primarily through outsourcing or subcontracting”. This decoupling increases the ability to respond to a wide range of contingencies because resources can be reallocated cheaply and quickly. This would imply that legacy airlines, given their rapidly changing environment, would be characterized by increased outsourcing. In fact, this is not always the case and we have not generally found as much outsourcing as we anticipated, although there are hints that in some sub-sectors of catering, for example, there are moves towards the expected form. While customer sales and ticketing and brand management, tended to follow the pattern that TCE proposes to be most advantageous, the results for the other functions show an emerging mixed picture of in-house provision, full outsourcing, as well as partial and hybrid arrangements that encompass less outsourcing than the framework would generally predict. What is clear is that the factors affecting the decision to outsource are complex and that this is an industry in transition; as a result it may be that some of the functions we examined may in future be outsourced more to the anticipated degree.