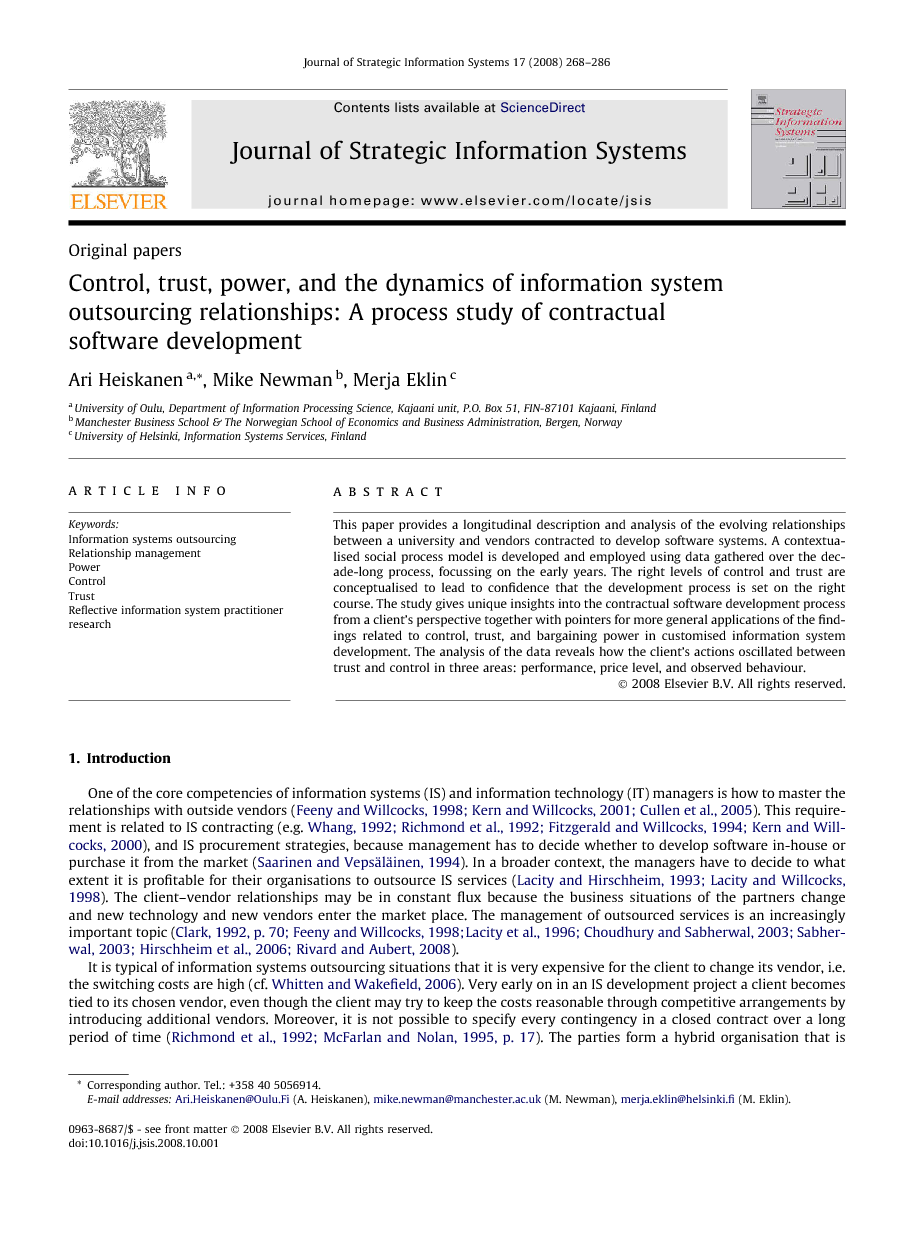 This paper provides a longitudinal description and analysis of the evolving relationships between a university and vendors contracted to develop software systems. A contextualised social process model is developed and employed using data gathered over the decade-long process, focussing on the early years. The right levels of control and trust are conceptualised to lead to confidence that the development process is set on the right course. The study gives unique insights into the contractual software development process from a client’s perspective together with pointers for more general applications of the findings related to control, trust, and bargaining power in customised information system development. The analysis of the data reveals how the client’s actions oscillated between trust and control in three areas: performance, price level, and observed behaviour.

One of the core competencies of information systems (IS) and information technology (IT) managers is how to master the relationships with outside vendors (Feeny and Willcocks, 1998, Kern and Willcocks, 2001 and Cullen et al., 2005). This requirement is related to IS contracting (e.g. Whang, 1992, Richmond et al., 1992, Fitzgerald and Willcocks, 1994 and Kern and Willcocks, 2000), and IS procurement strategies, because management has to decide whether to develop software in-house or purchase it from the market (Saarinen and Vepsäläinen, 1994). In a broader context, the managers have to decide to what extent it is profitable for their organisations to outsource IS services (Lacity and Hirschheim, 1993 and Lacity and Willcocks, 1998). The client–vendor relationships may be in constant flux because the business situations of the partners change and new technology and new vendors enter the market place. The management of outsourced services is an increasingly important topic (Clark, 1992, Feeny and Willcocks, 1998, Lacity et al., 1996, Choudhury and Sabherwal, 2003, Sabherwal, 2003, Hirschheim et al., 2006 and Rivard and Aubert, 2008). It is typical of information systems outsourcing situations that it is very expensive for the client to change its vendor, i.e. the switching costs are high (cf. Whitten and Wakefield, 2006). Very early on in an IS development project a client becomes tied to its chosen vendor, even though the client may try to keep the costs reasonable through competitive arrangements by introducing additional vendors. Moreover, it is not possible to specify every contingency in a closed contract over a long period of time (Richmond et al., 1992 and McFarlan and Nolan, 1995). The parties form a hybrid organisation that is somewhere between a market and a hierarchy (Bachmann, 2001 and Williamson, 1991). Negotiations and re-negotiations with bargaining (Argyres and Liebeskind, 1999) fill the voids that emerge due to incomplete contracting issues; it is also possible that the contract between the parties would evolve into a relational one (Kern and Willcocks, 2000 and Lacity and Hirschheim, 1993, pp. 35–36). The influence mechanisms available to the parties form the basis of how the relationship is managed during long contractual periods. Power, trust and control are key notions here.

Using our method to analyse the dynamics of the client–vendor relationship from the inside of the process it was possible to gather data that revealed the pattern of how the client exercised trust and control differently during different times in order to be confident that the development process was in good shape. Through reflections of the past, we put forward an interpretation of the history in the form of a social process model. The model shows how the client increased control as much as it was possible within the contract, when it was realised that there were problems with the deliverables from the vendor. We also briefly showed that several additional interpretations could be generated from our data. We believe that this case study gives novel insights into how to conceptualise trust and control in IS development contracts. Our case indicates that the (bargaining) power of the parties is a forceful factor underlying the choice possibilities of the act of the parties. We could show how the acts of the client were based on the varying amount of trust and control. Our conceptualisation of the relationship between trust and control was simple, based on the resource dependency view of the power bases of the parties. It would be interesting to investigate whether this simplicity of trust and control which are complementary sources of actions prevails in other cases of contractual IS development. For practitioners, our case is an additional confirmation of the importance of writing contracts from the beginning in such a way that the client–vendor relationship is envisioned for a sufficiently long period of time. The reliance on previously generated trust is not enough; it must be augmented with proper contracts. The client should also secure that it has enough bargaining power and capabilities.