عنوان انگلیسی
Making the locational choice: A case approach to the development of a theory of offshore outsourcing and internationalization
دانلود فوری مقاله + سفارش ترجمه 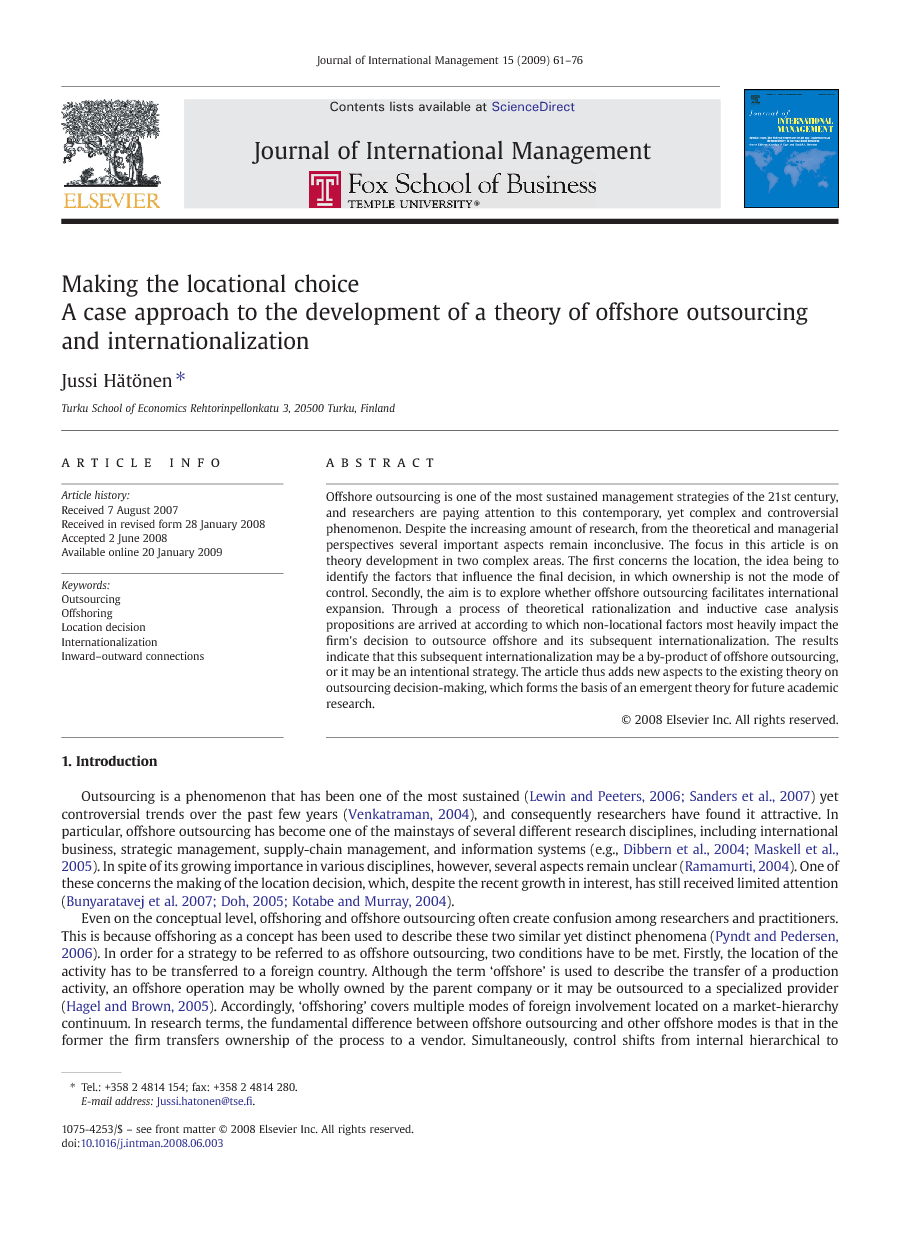 Offshore outsourcing is one of the most sustained management strategies of the 21st century, and researchers are paying attention to this contemporary, yet complex and controversial phenomenon. Despite the increasing amount of research, from the theoretical and managerial perspectives several important aspects remain inconclusive. The focus in this article is on theory development in two complex areas. The first concerns the location, the idea being to identify the factors that influence the final decision, in which ownership is not the mode of control. Secondly, the aim is to explore whether offshore outsourcing facilitates international expansion. Through a process of theoretical rationalization and inductive case analysis propositions are arrived at according to which non-locational factors most heavily impact the firm's decision to outsource offshore and its subsequent internationalization. The results indicate that this subsequent internationalization may be a by-product of offshore outsourcing, or it may be an intentional strategy. The article thus adds new aspects to the existing theory on outsourcing decision-making, which forms the basis of an emergent theory for future academic research.

Outsourcing is a phenomenon that has been one of the most sustained (Lewin and Peeters, 2006 and Sanders et al., 2007) yet controversial trends over the past few years (Venkatraman, 2004), and consequently researchers have found it attractive. In particular, offshore outsourcing has become one of the mainstays of several different research disciplines, including international business, strategic management, supply-chain management, and information systems (e.g., Dibbern et al., 2004 and Maskell et al., 2005). In spite of its growing importance in various disciplines, however, several aspects remain unclear (Ramamurti, 2004). One of these concerns the making of the location decision, which, despite the recent growth in interest, has still received limited attention (Bunyaratavej et al., 2007, Doh, 2005 and Kotabe and Murray, 2004). Even on the conceptual level, offshoring and offshore outsourcing often create confusion among researchers and practitioners. This is because offshoring as a concept has been used to describe these two similar yet distinct phenomena (Pyndt and Pedersen, 2006). In order for a strategy to be referred to as offshore outsourcing, two conditions have to be met. Firstly, the location of the activity has to be transferred to a foreign country. Although the term ‘offshore’ is used to describe the transfer of a production activity, an offshore operation may be wholly owned by the parent company or it may be outsourced to a specialized provider (Hagel and Brown, 2005). Accordingly, ‘offshoring’ covers multiple modes of foreign involvement located on a market-hierarchy continuum. In research terms, the fundamental difference between offshore outsourcing and other offshore modes is that in the former the firm transfers ownership of the process to a vendor. Simultaneously, control shifts from internal hierarchical to contract-based governance. Thereby, and secondly, there has to be a simultaneous transfer of ownership and control, which means that the activity is carried out by an external supplier [externalized] rather than an in-house unit [internalized] (Pyndt and Pedersen, 2006). Accordingly, offshore outsourcing as a concept refers to the transfer of production activities previously carried out internally to an external party located in a foreign location (e.g., Barthélemy, 2003).

This article addresses four research questions related to the location decision and the consequent effects on internationalization of a non-ownership-based offshoring strategy, i.e. offshore outsourcing, which in current research have not received the attention they deserve. What factors influence the location decision [RQ1]? When and under what circumstances do firms choose partners prior to choosing the location [RQ2]. Does a strategy leaning toward internationalization affect the location choices [RQ3]? Does, and if so under what conditions, offshore outsourcing facilitate the success of the future degree of internationalization [RQ4]? The case approach was used to build, develop and refine the existing theory surrounding these issues due to its ability to provide comprehensive and in-depth knowledge. The results presented are encapsulated into propositions based on which a theory for further research is put forward. Furthermore, the findings provide insights that managers, practitioners, and policy makers, might find useful. In terms of the theory, the article provides evidence that non-locational factors most heavily impact the firm's decision to outsource offshore and subsequently to internationalize. In the light of the results, it seems that situational and internal factors such as ‘what is being outsourced’ and ‘why’ dominate not only the location decision, but also the sequence in which firms choose a partner, whether prior to the location or vice versa. The case results also indicate that strategic leaning toward internationalization may have an effect on the choice of location, which brings in a new variable and factor to studies on the location decision. Moreover, it seems that not only does prior experience of offshore outsourcing have a positive effect on the future degree and success of internationalization through several serendipitous connective benefits, the extent to which firms are able to benefit from these inward–outward connections is also influenced by non-locational factors. All of these results are indicative of an emergent theory that could be helpful in future research on outsourcing-location decisions, as well as on the effects of further international expansion. Theoretical rationalization and induction from the case data gave rise to propositions that it is hoped will be of use in future endeavors to capture the aspects of this complex phenomenon.