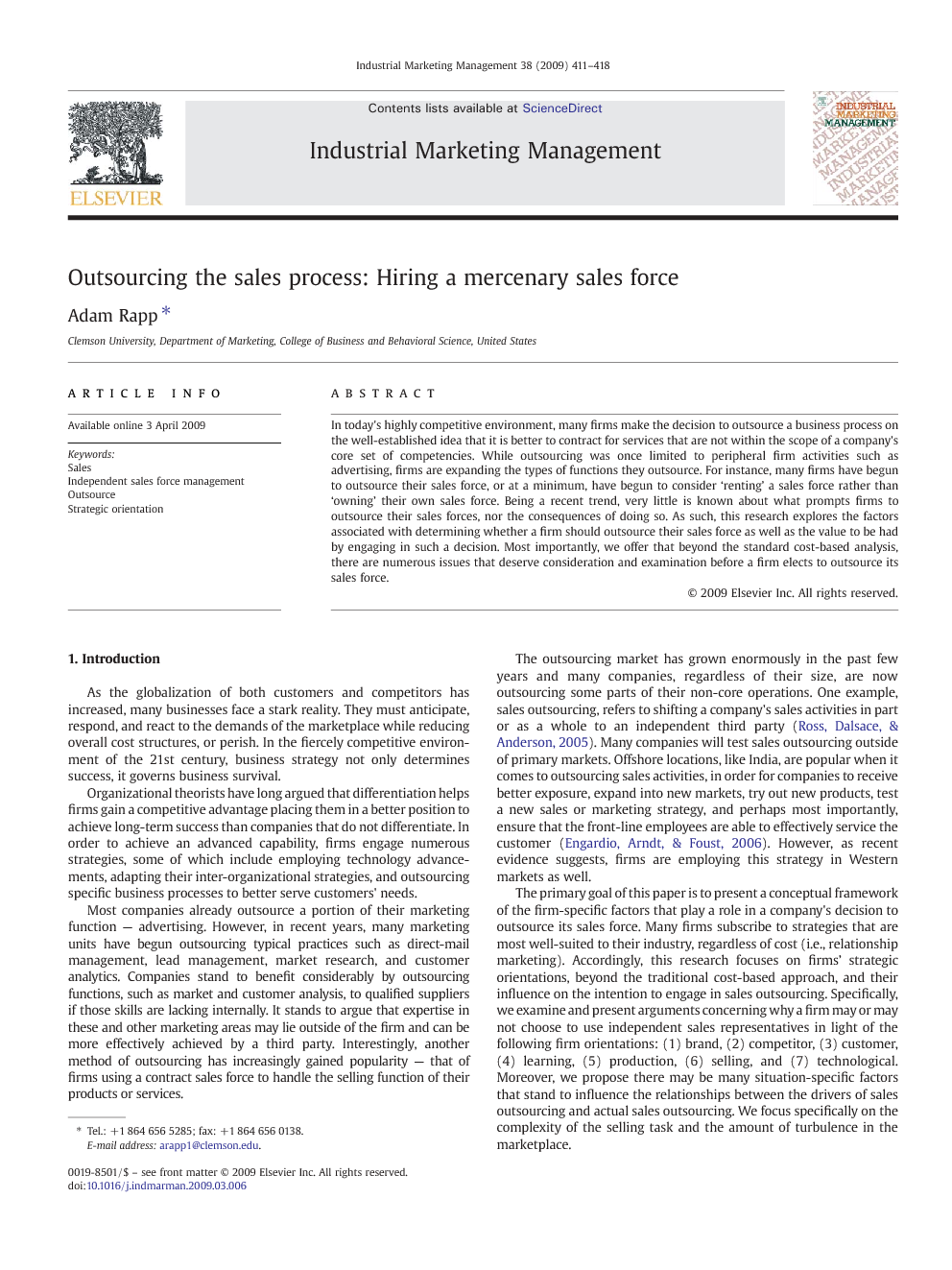 In today's highly competitive environment, many firms make the decision to outsource a business process on the well-established idea that it is better to contract for services that are not within the scope of a company's core set of competencies. While outsourcing was once limited to peripheral firm activities such as advertising, firms are expanding the types of functions they outsource. For instance, many firms have begun to outsource their sales force, or at a minimum, have begun to consider ‘renting’ a sales force rather than ‘owning’ their own sales force. Being a recent trend, very little is known about what prompts firms to outsource their sales forces, nor the consequences of doing so. As such, this research explores the factors associated with determining whether a firm should outsource their sales force as well as the value to be had by engaging in such a decision. Most importantly, we offer that beyond the standard cost-based analysis, there are numerous issues that deserve consideration and examination before a firm elects to outsource its sales force.

As the globalization of both customers and competitors has increased, many businesses face a stark reality. They must anticipate, respond, and react to the demands of the marketplace while reducing overall cost structures, or perish. In the fiercely competitive environment of the 21st century, business strategy not only determines success, it governs business survival. Organizational theorists have long argued that differentiation helps firms gain a competitive advantage placing them in a better position to achieve long-term success than companies that do not differentiate. In order to achieve an advanced capability, firms engage numerous strategies, some of which include employing technology advancements, adapting their inter-organizational strategies, and outsourcing specific business processes to better serve customers' needs. Most companies already outsource a portion of their marketing function — advertising. However, in recent years, many marketing units have begun outsourcing typical practices such as direct-mail management, lead management, market research, and customer analytics. Companies stand to benefit considerably by outsourcing functions, such as market and customer analysis, to qualified suppliers if those skills are lacking internally. It stands to argue that expertise in these and other marketing areas may lie outside of the firm and can be more effectively achieved by a third party. Interestingly, another method of outsourcing has increasingly gained popularity — that of firms using a contract sales force to handle the selling function of their products or services. The outsourcing market has grown enormously in the past few years and many companies, regardless of their size, are now outsourcing some parts of their non-core operations. One example, sales outsourcing, refers to shifting a company's sales activities in part or as a whole to an independent third party (Ross, Dalsace, & Anderson, 2005). Many companies will test sales outsourcing outside of primary markets. Offshore locations, like India, are popular when it comes to outsourcing sales activities, in order for companies to receive better exposure, expand into new markets, try out new products, test a new sales or marketing strategy, and perhaps most importantly, ensure that the front-line employees are able to effectively service the customer (Engardio, Arndt, & Foust, 2006). However, as recent evidence suggests, firms are employing this strategy in Western markets as well.

Rising selling costs, shifting market patterns, changes in operations and/or product lines diversification, as well as growth in private selling firms, are leading many companies to re-assess their traditional perceptions and attitudes towards employing independent sales representatives. Many firms have moved beyond the traditional cost-based analysis of sales force outsourcing and have begun to consider other factors such as the influence on the customer and the salesperson as a source of competitive intelligence. Interestingly, there is paucity of research on factors other than traditional cost-based approach. Thus, there is a need for further research in this area if we are to develop a more complete understanding of the outsourcing phenomena. There are several additional reasons not discussed directly above that highlight the importance of and potential roles of a sales force. First, salespeople are exposed to a large quantity of information about their competitors, and such information may prove valuable to their firm in terms of marketing strategies. Many firms spend tremendous amounts of money collecting this information, even though much of it is readily available through their sales personnel. These personnel can provide the most current information since they are exposed to the events of interest as they occur (Moss, 1979). Several sources state that a company's sales force is the single best internal source of information concerning what is occurring in the market with customers and competitors (Hershey, 1980, Lambert et al., 1990 and Young, 1989). This idea is based upon the notion that sales personnel can be considered boundary spanners, in that they have the close direct and indirect contact with the competition via customers and the organization. Individual salespeople encounter competitor information on a day-to-day basis and will absorb much of this information simply by interacting with the customer. It is their discretion, however, whether to pass the information along to the appropriate departments and sales managers (Lambert et al., 1990).