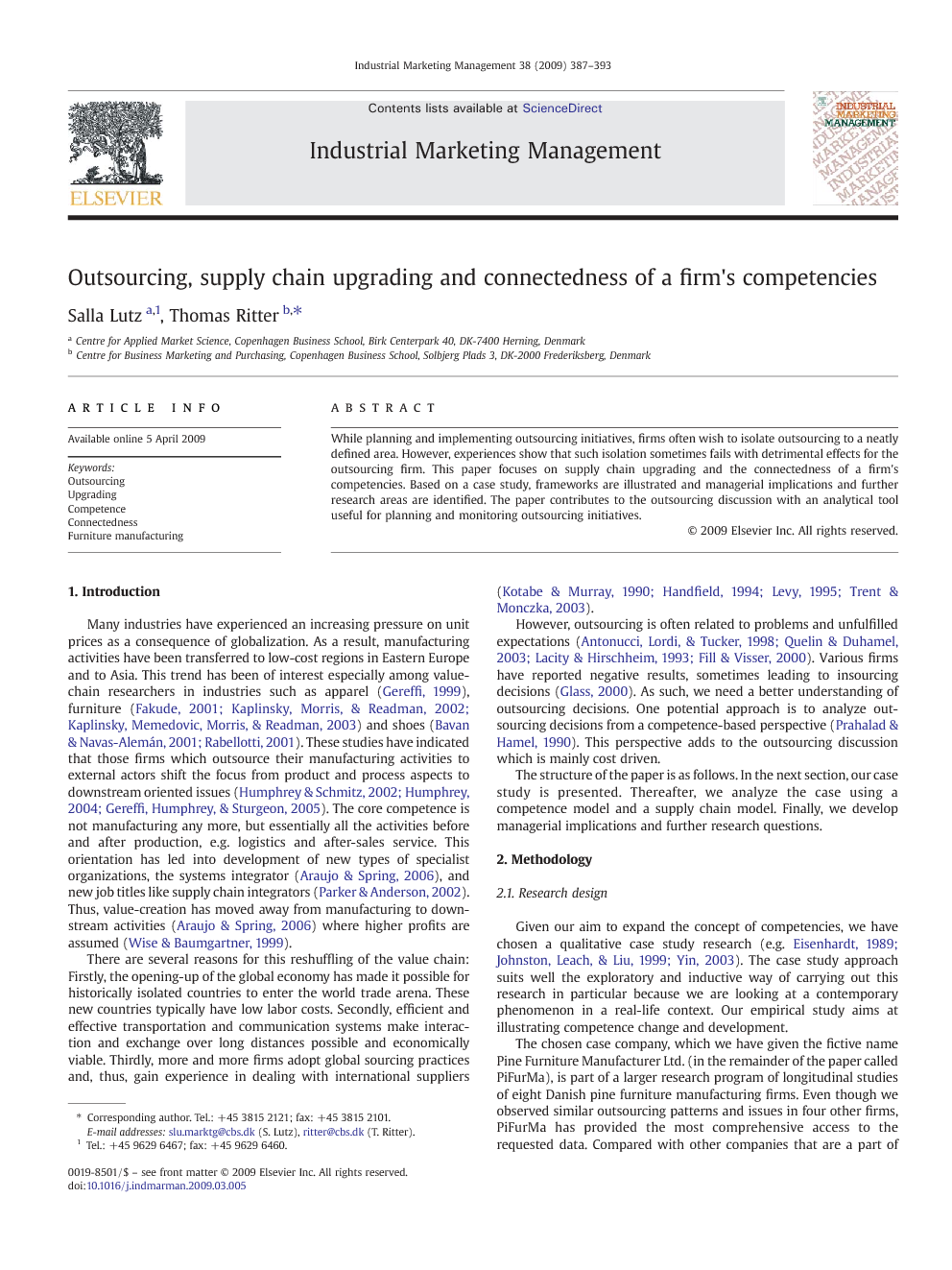 Many industries have experienced an increasing pressure on unit prices as a consequence of globalization. As a result, manufacturing activities have been transferred to low-cost regions in Eastern Europe and to Asia. This trend has been of interest especially among value-chain researchers in industries such as apparel (Gereffi, 1999), furniture (Fakude, 2001, Kaplinsky et al., 2002 and Kaplinsky et al., 2003) and shoes (Bavan and Navas-Alemán, 2001 and Rabellotti, 2001). These studies have indicated that those firms which outsource their manufacturing activities to external actors shift the focus from product and process aspects to downstream oriented issues (Humphrey and Schmitz, 2002, Humphrey, 2004 and Gereffi et al., 2005). The core competence is not manufacturing any more, but essentially all the activities before and after production, e.g. logistics and after-sales service. This orientation has led into development of new types of specialist organizations, the systems integrator (Araujo & Spring, 2006), and new job titles like supply chain integrators (Parker & Anderson, 2002). Thus, value-creation has moved away from manufacturing to downstream activities (Araujo & Spring, 2006) where higher profits are assumed (Wise & Baumgartner, 1999). There are several reasons for this reshuffling of the value chain: Firstly, the opening-up of the global economy has made it possible for historically isolated countries to enter the world trade arena. These new countries typically have low labor costs. Secondly, efficient and effective transportation and communication systems make interaction and exchange over long distances possible and economically viable. Thirdly, more and more firms adopt global sourcing practices and, thus, gain experience in dealing with international suppliers (Kotabe and Murray, 1990, Handfield, 1994, Levy, 1995 and Trent and Monczka, 2003). However, outsourcing is often related to problems and unfulfilled expectations (Antonucci et al., 1998, Quelin and Duhamel, 2003, Lacity and Hirschheim, 1993 and Fill and Visser, 2000). Various firms have reported negative results, sometimes leading to insourcing decisions (Glass, 2000). As such, we need a better understanding of outsourcing decisions. One potential approach is to analyze outsourcing decisions from a competence-based perspective (Prahalad & Hamel, 1990). This perspective adds to the outsourcing discussion which is mainly cost driven.

This paper has demonstrated the importance of a competence-based view on outsourcing. It contributes to theory and practice by illustrating the competence model, its use and the implications derived from it. The illustration is based on a single case study. It would be interesting to systematically analyze various outsourcing initiatives in order to find main trends and typical pitfalls. In this context a comparative study may be conducted comparing those outsourcing activities that have been initiated pro-actively to enhance the core competence thought and those of more reactive initiatives like the one illustrated in this paper. Likewise, different firms make different decisions regarding outsourcing. It would be interesting to analyze if such differences are based on different perceptions of competencies and their interconnectedness. This study has contributed with a novel framework for analyzing outsourcing decisions. This paper shows that a competence-based view on outsourcing decisions is a valuable addition to cost-based perspectives.