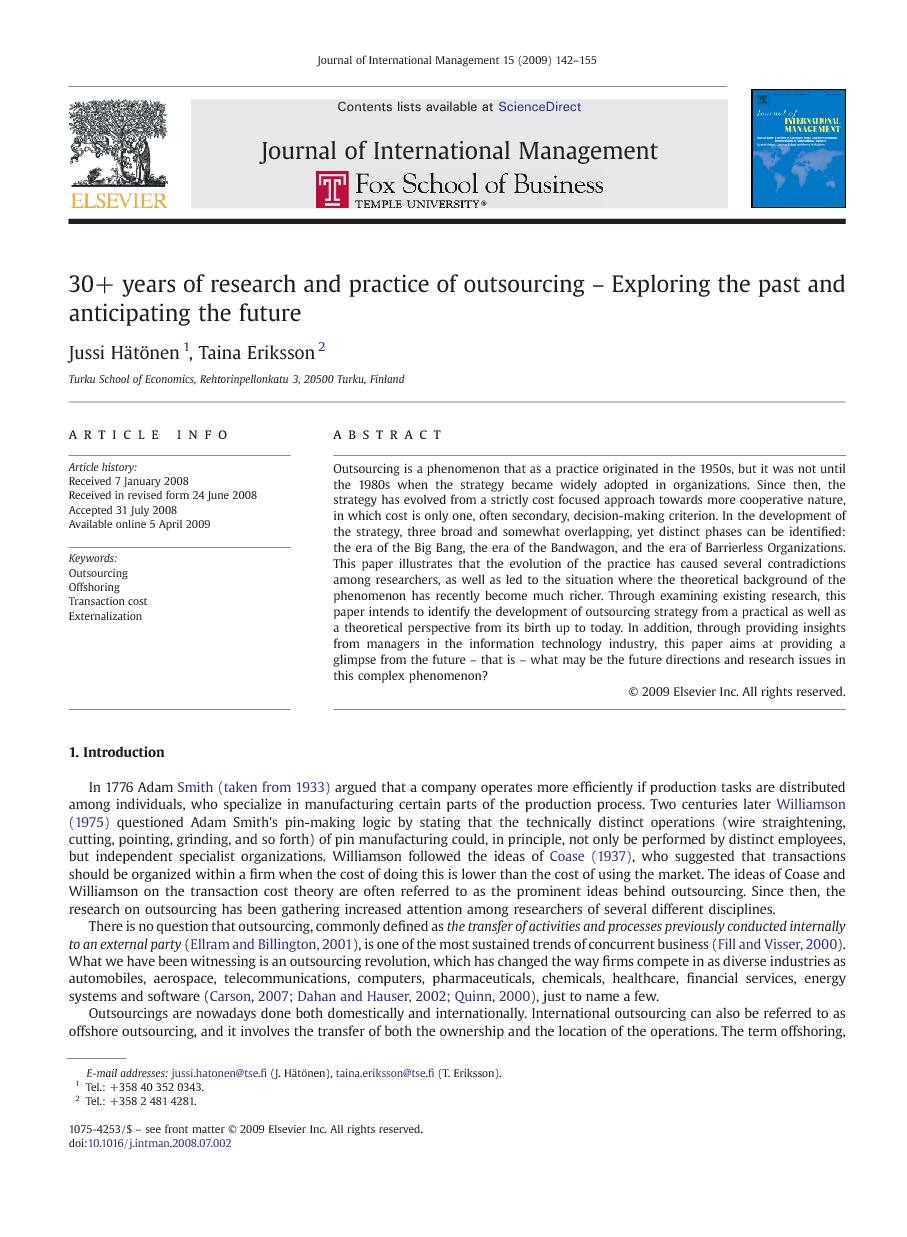 Outsourcing is a phenomenon that as a practice originated in the 1950s, but it was not until the 1980s when the strategy became widely adopted in organizations. Since then, the strategy has evolved from a strictly cost focused approach towards more cooperative nature, in which cost is only one, often secondary, decision-making criterion. In the development of the strategy, three broad and somewhat overlapping, yet distinct phases can be identified: the era of the Big Bang, the era of the Bandwagon, and the era of Barrierless Organizations. This paper illustrates that the evolution of the practice has caused several contradictions among researchers, as well as led to the situation where the theoretical background of the phenomenon has recently become much richer. Through examining existing research, this paper intends to identify the development of outsourcing strategy from a practical as well as a theoretical perspective from its birth up to today. In addition, through providing insights from managers in the information technology industry, this paper aims at providing a glimpse from the future – that is – what may be the future directions and research issues in this complex phenomenon?

In 1776 Adam Smith (taken from 1933) argued that a company operates more efficiently if production tasks are distributed among individuals, who specialize in manufacturing certain parts of the production process. Two centuries later Williamson (1975) questioned Adam Smith's pin-making logic by stating that the technically distinct operations (wire straightening, cutting, pointing, grinding, and so forth) of pin manufacturing could, in principle, not only be performed by distinct employees, but independent specialist organizations. Williamson followed the ideas of Coase (1937), who suggested that transactions should be organized within a firm when the cost of doing this is lower than the cost of using the market. The ideas of Coase and Williamson on the transaction cost theory are often referred to as the prominent ideas behind outsourcing. Since then, the research on outsourcing has been gathering increased attention among researchers of several different disciplines. There is no question that outsourcing, commonly defined as the transfer of activities and processes previously conducted internally to an external party (Ellram and Billington, 2001), is one of the most sustained trends of concurrent business (Fill and Visser, 2000). What we have been witnessing is an outsourcing revolution, which has changed the way firms compete in as diverse industries as automobiles, aerospace, telecommunications, computers, pharmaceuticals, chemicals, healthcare, financial services, energy systems and software ( Carson, 2007, Dahan and Hauser, 2002 and Quinn, 2000), just to name a few. Outsourcings are nowadays done both domestically and internationally. International outsourcing can also be referred to as offshore outsourcing, and it involves the transfer of both the ownership and the location of the operations. The term offshoring, even though often used synonymously with offshore outsourcing, actually refers to the strategy of transferring activities across national borders. This may be done through outsourcing (using external resources) or through foreign direct investment (using internal resources). (Hagel and Brown, 2005).

Outsourcing has been, and continues to be, one of the key issues in the modern research tradition in several disciplines. Since the 1980s outsourcing as a corporate strategy has evolved from the transactional approach to a more developmental form in which the outsourced process is co-developed with the outsourcing provider, and in which cost is rarely the primary rationale. Along with these developments of the practice, the academic interest on this topic has grown, and created a highly complex research area. One of the reasons why the current outsourcing theory base is extensive and versatile is that the research is cumulative. Questions such as what to outsource, how and where have been the primary questions guiding the outsourcing research in the past, and still remain to be such, although new questions have arisen (see Fig. 2). Also, in terms of the outsourcing theory base, no current developments have supplanted previous theories. Instead they extend and support previous findings. For instance, firms still outsource certain activities with the sole purpose of cutting operational costs, although much more emphasis in current literature is given to e.g., seeking of resources and skills or to gaining operational flexibility. Further, although current literature promotes a more cooperative approach to outsourcing management, the relationships are often best managed through arms-length relationships to minimize the transaction cost. Thereby, in the broad field of outsourcing research, the relational view and transaction cost approach do not contradict each other, but they co-exist.