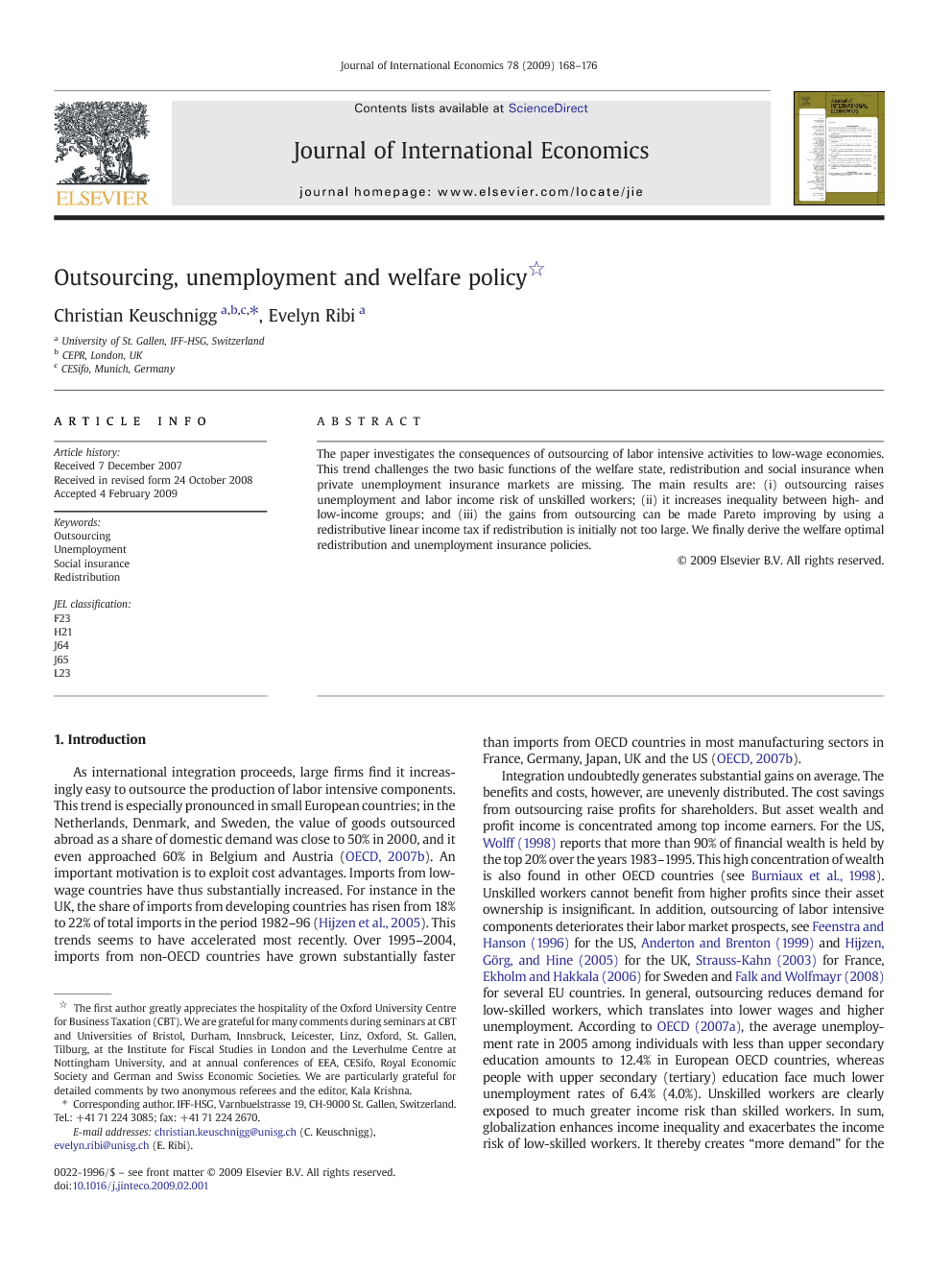 Integration undoubtedly generates substantial gains on average. The benefits and costs, however, are unevenly distributed. The cost savings from outsourcing raise profits for shareholders. But asset wealth and profit income is concentrated among top income earners. For the US, Wolff (1998) reports that more than 90% of financial wealth is held by the top 20% over the years 1983–1995. This high concentration of wealth is also found in other OECD countries (see Burniaux et al., 1998). Unskilled workers cannot benefit from higher profits since their asset ownership is insignificant. In addition, outsourcing of labor intensive components deteriorates their labor market prospects, see Feenstra and Hanson (1996) for the US, Anderton and Brenton (1999) and Hijzen, Görg, and Hine (2005) for the UK, Strauss-Kahn (2003) for France, Ekholm and Hakkala (2006) for Sweden and Falk and Wolfmayr (2008) for several EU countries. In general, outsourcing reduces demand for low-skilled workers, which translates into lower wages and higher unemployment. According to OECD (2007a), the average unemployment rate in 2005 among individuals with less than upper secondary education amounts to 12.4% in European OECD countries, whereas people with upper secondary (tertiary) education face much lower unemployment rates of 6.4% (4.0%). Unskilled workers are clearly exposed to much greater income risk than skilled workers. In sum, globalization enhances income inequality and exacerbates the income risk of low-skilled workers. It thereby creates “more demand” for the basic functions of the welfare state, consisting of social insurance in the absence of private unemployment insurance, and redistribution. However, the welfare state itself creates part of the problem. Estimates of the elasticity of reservation wages with respect to unemployment benefits range from 0.11–0.17 (Lancaster and Chesher, 1983) to values around 0.4 (Feldstein et al., 1984, Fishe, 1982 and Van den Berg, 1990). The high benefits in Europe (replacement rates are mostly 60% or more, see OECD, 2004) thus significantly inflate wages. Díaz-Mora (2008) estimates that a 1% increase in firms' domestic labor cost boosts the volume of outsourcing by 0.3%, and adds to outsourcing at the extensive margin by significantly raising the probability that a firm engages in subcontracting (Díaz-Mora and Triguero-Cano, 2007). Foreign countries with lower unit labor costs attract more outsourcing (Egger and Egger, 2003). We conclude that the welfare state tends to accelerate outsourcing by raising wages.

The trend to outsourcing of labor intensive components puts pressure on the welfare states of advanced economies. Based on a model of outsourcing and involuntary unemployment, we have shown how integration, by lowering transport costs of intermediate imports, facilitates outsourcing and impairs employment prospects and wages of unskilled workers while at the same time raising profits of top income earners. The resulting inequality and the increased income risk of unskilled workers seemingly emphasize the basic functions of the welfare state, redistribution and social insurance. The need for an extended welfare state in the presence of globalization pressure arises even if the welfare state itself creates part of the problem that it is designed to solve. Offering higher replacement incomes for more insurance boosts wages and causes higher unemployment. By inducing even more outsourcing than would otherwise obtain, the impact of social insurance on unemployment of low-skilled workers is reinforced. These detrimental effects show up as part of the efficiency costs arising from welfare policies. However, expanding a linear income tax to redistribute more heavily from skilled to unskilled households might involve a smaller efficiency cost than is commonly perceived. Since the income tax redistributes only to households earning an active wage income, it cuts the high participation tax on unskilled workers and widens the income gap between work and joblessness. It thereby acts as a wage subsidy which is often deemed to become more important in advanced welfare states when the integration of the world economy accelerates. In our model, the redistribution in favor of low-skilled workers raises net wages while, at the same time, gross wages fall. It thereby initiates job creation and reduces unemployment among low-skilled workers. Since lower wage costs add to profits of integrated firms, the policy also helps to stem the tide towards outsourcing.