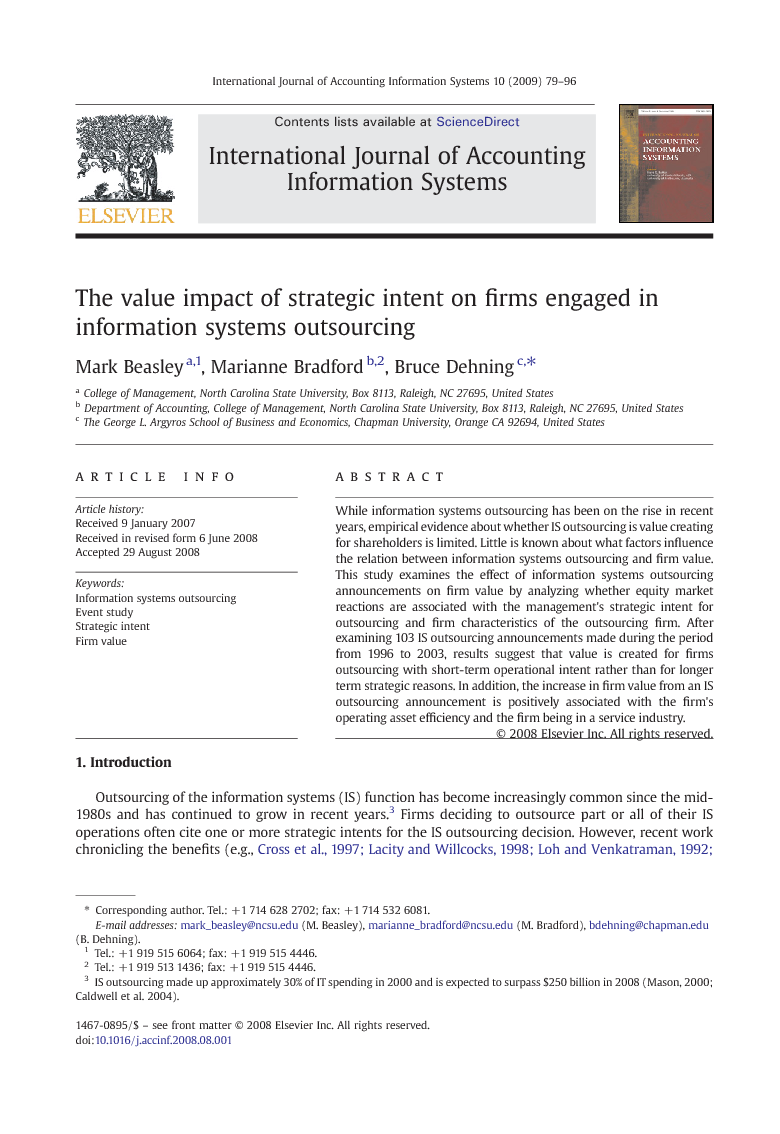 Outsourcing of the information systems (IS) function has become increasingly common since the mid-1980s and has continued to grow in recent years.3 Firms deciding to outsource part or all of their IS operations often cite one or more strategic intents for the IS outsourcing decision. However, recent work chronicling the benefits (e.g., Cross et al., 1997, Lacity and Willcocks, 1998, Loh and Venkatraman, 1992 and Smith et al., 1998) and risks involved in IS outsourcing (Aubert et al., 2004, Earl, 1996 and Oh et al., 2006) suggest that there remains widespread uncertainty about the value-adding benefits of IS outsourcing. Although conceptually the purported benefits such as cost reductions and improvements in system quality, access to expertise, organizational flexibility, and ability to focus on core competencies are appealing, they must be weighed against risks created by outsourcing arrangements such as vendor over-opportunism, loss of control, increased governance costs, and technological inflexibility (Beasley et al., 2004 and Aubert et al., 1998). Therefore, the decision to outsource IS with the ultimate goal of impacting firm value through increased profits is a strategic decision, which weighs various costs and benefits, made by the managers of a firm. However, limited empirical evidence exists about whether management's strategic intent regarding IS outsourcing actually achieves the intended goal of increasing firm value. Because many of the benefits of IS outsourcing are both intangible and long-term oriented, but many of the risks such as loss of control due to asset specificity (Lonsdale, 2001) and technological lock-in (Aubert et al., 2004) are near-term, there is a timing mismatch between risks and potential benefits. This study attempts to look at this mismatch by examining management's strategic intent for IS outsourcing in face of the known and unknown risks.