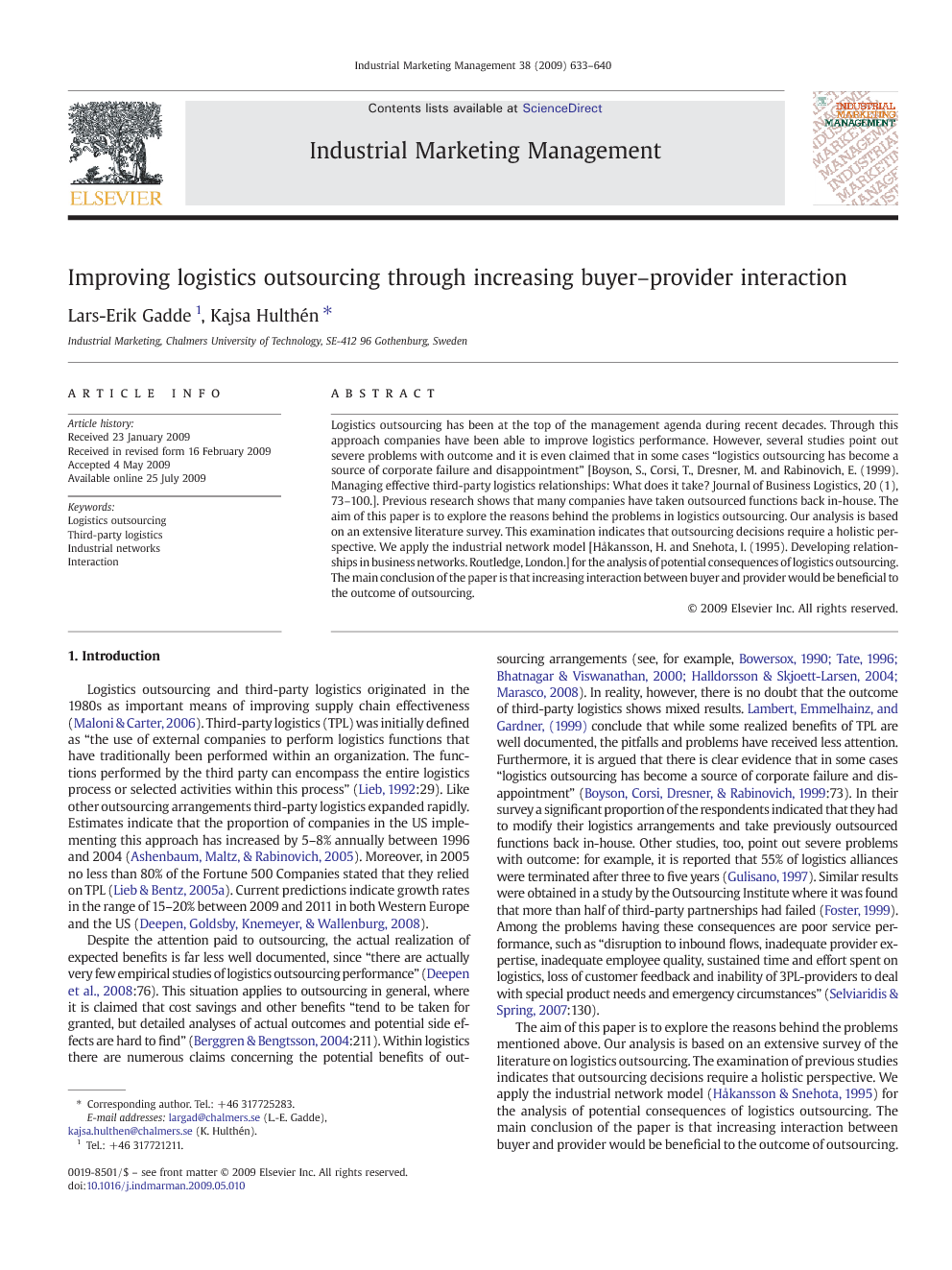 Logistics outsourcing has been at the top of the management agenda during recent decades. Through this approach companies have been able to improve logistics performance. However, several studies point out severe problems with outcome and it is even claimed that in some cases “logistics outsourcing has become a source of corporate failure and disappointment” [Boyson, S., Corsi, T., Dresner, M. and Rabinovich, E. (1999). Managing effective third-party logistics relationships: What does it take? Journal of Business Logistics, 20 (1), 73–100.]. Previous research shows that many companies have taken outsourced functions back in-house. The aim of this paper is to explore the reasons behind the problems in logistics outsourcing. Our analysis is based on an extensive literature survey. This examination indicates that outsourcing decisions require a holistic perspective. We apply the industrial network model [Håkansson, H. and Snehota, I. (1995). Developing relationships in business networks. Routledge, London.] for the analysis of potential consequences of logistics outsourcing. The main conclusion of the paper is that increasing interaction between buyer and provider would be beneficial to the outcome of outsourcing.

Logistics outsourcing and third-party logistics originated in the 1980s as important means of improving supply chain effectiveness (Maloni & Carter, 2006). Third-party logistics (TPL) was initially defined as “the use of external companies to perform logistics functions that have traditionally been performed within an organization. The functions performed by the third party can encompass the entire logistics process or selected activities within this process” (Lieb, 1992:29). Like other outsourcing arrangements third-party logistics expanded rapidly. Estimates indicate that the proportion of companies in the US implementing this approach has increased by 5–8% annually between 1996 and 2004 (Ashenbaum, Maltz, & Rabinovich, 2005). Moreover, in 2005 no less than 80% of the Fortune 500 Companies stated that they relied on TPL (Lieb & Bentz, 2005a). Current predictions indicate growth rates in the range of 15–20% between 2009 and 2011 in both Western Europe and the US (Deepen, Goldsby, Knemeyer, & Wallenburg, 2008). Despite the attention paid to outsourcing, the actual realization of expected benefits is far less well documented, since “there are actually very few empirical studies of logistics outsourcing performance” (Deepen et al., 2008:76). This situation applies to outsourcing in general, where it is claimed that cost savings and other benefits “tend to be taken for granted, but detailed analyses of actual outcomes and potential side effects are hard to find” (Berggren & Bengtsson, 2004:211). Within logistics there are numerous claims concerning the potential benefits of outsourcing arrangements (see, for example, Bowersox, 1990, Tate, 1996, Bhatnagar and Viswanathan, 2000, Halldorsson and Skjoett-Larsen, 2004 and Marasco, 2008). In reality, however, there is no doubt that the outcome of third-party logistics shows mixed results. Lambert, Emmelhainz, and Gardner, (1999) conclude that while some realized benefits of TPL are well documented, the pitfalls and problems have received less attention. Furthermore, it is argued that there is clear evidence that in some cases “logistics outsourcing has become a source of corporate failure and disappointment” (Boyson, Corsi, Dresner, & Rabinovich, 1999:73). In their survey a significant proportion of the respondents indicated that they had to modify their logistics arrangements and take previously outsourced functions back in-house. Other studies, too, point out severe problems with outcome: for example, it is reported that 55% of logistics alliances were terminated after three to five years (Gulisano, 1997). Similar results were obtained in a study by the Outsourcing Institute where it was found that more than half of third-party partnerships had failed (Foster, 1999). Among the problems having these consequences are poor service performance, such as “disruption to inbound flows, inadequate provider expertise, inadequate employee quality, sustained time and effort spent on logistics, loss of customer feedback and inability of 3PL-providers to deal with special product needs and emergency circumstances” (Selviaridis & Spring, 2007:130).

Previous research suggested the industrial network approach as an adequate conceptualisation for a complementary perspective on logistics outsourcing and third-party logistics. The analysis of outsourcing from a network point of view clearly illustrates that outsourcing of logistics is not only about moving an activity from one firm to another. Owing to network interdependencies, other activities and the links between them will be affected. Moreover, logistics outsourcing will impact on prevalent resource constellations and actor webs. An industrial network perspective on logistics outsourcing would thus improve the understanding of potential consequences of such reorganizing of the business landscape. Although it is generally acknowledged that the relationship between buyer and provider is critical to the performance of outsourcing arrangements, previous studies have focused primarily on either the outsourcing firm or the provider of the service. Our approach to handling the problems in the implementation of logistics outsourcing follows the conclusion of Deepen et al. (2008), that the main drivers of logistics outsourcing performance reside within the relationship with the TPL-provider, and the argument of Panayides (2007) that the key issue is to develop relational capabilities. On this basis we suggest increasing buyer–provider interaction as a means of achieving performance improvements. Our analysis shows that interactive relationships between buyer and provider could result in several benefits. In the decision phase, interaction would favour a more complete understanding of the potential consequences of logistics outsourcing as well as a thorough evaluation of potential providers. Furthermore, interaction would be helpful in determining the scope of the outsourcing arrangement through a joint analysis of the requirements of the buyer, the capabilities of the provider, and the costs and benefits associated with different types of arrangements. In the regular provision of the logistics services, interaction is required in order to maintain and develop the performance of the arrangement. Particularly when the scope of outsourcing is extended, buyer and provider have to be in close contact for these complex solutions to function. In this respect interaction involving joint learning and teaching are more appropriate mechanisms than the control ambitions of the buyer. Finally, the conditions for logistics outsourcing change over time, and so the scope of the outsourcing arrangement and the relationship involvement must be assessed and modified in accordance with these network dynamics.