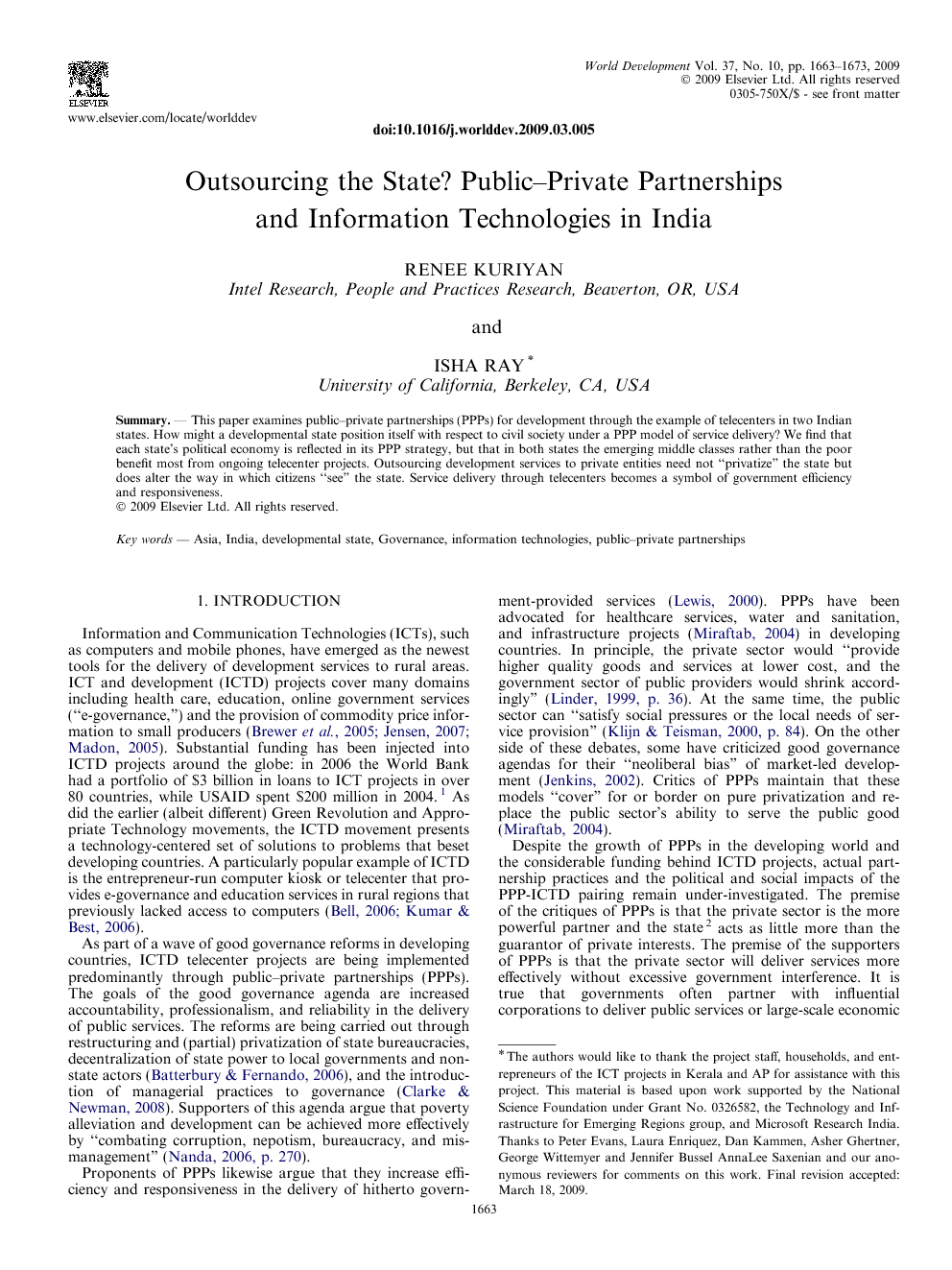 This paper examines public–private partnerships (PPPs) for development through the example of telecenters in two Indian states. How might a developmental state position itself with respect to civil society under a PPP model of service delivery? We find that each state’s political economy is reflected in its PPP strategy, but that in both states the emerging middle classes rather than the poor benefit most from ongoing telecenter projects. Outsourcing development services to private entities need not “privatize” the state but does alter the way in which citizens “see” the state. Service delivery through telecenters becomes a symbol of government efficiency and responsiveness.

Information and Communication Technologies (ICTs), such as computers and mobile phones, have emerged as the newest tools for the delivery of development services to rural areas. ICT and development (ICTD) projects cover many domains including health care, education, online government services (“e-governance,”) and the provision of commodity price information to small producers (Brewer et al., 2005, Jensen, 2007 and Madon, 2005). Substantial funding has been injected into ICTD projects around the globe: in 2006 the World Bank had a portfolio of $3 billion in loans to ICT projects in over 80 countries, while USAID spent $200 million in 2004.1 As did the earlier (albeit different) Green Revolution and Appropriate Technology movements, the ICTD movement presents a technology-centered set of solutions to problems that beset developing countries. A particularly popular example of ICTD is the entrepreneur-run computer kiosk or telecenter that provides e-governance and education services in rural regions that previously lacked access to computers (Bell, 2006 and Kumar and Best, 2006). As part of a wave of good governance reforms in developing countries, ICTD telecenter projects are being implemented predominantly through public–private partnerships (PPPs). The goals of the good governance agenda are increased accountability, professionalism, and reliability in the delivery of public services. The reforms are being carried out through restructuring and (partial) privatization of state bureaucracies, decentralization of state power to local governments and non-state actors (Batterbury & Fernando, 2006), and the introduction of managerial practices to governance (Clarke & Newman, 2008). Supporters of this agenda argue that poverty alleviation and development can be achieved more effectively by “combating corruption, nepotism, bureaucracy, and mismanagement” (Nanda, 2006, p. 270).

This paper has examined the coupling of the public–private partnership model with ICTD efforts in light of how it affects entrepreneurs and households and enables a reshaping of the state in India. It addresses two main questions—whether PPPs reduce the ability of the state to serve the public good, and how citizens’ perceptions of the state are affected when PPPs are used to provide public services. The PPP literature is largely based on analyzing the relevance of the government when it partners with powerful private entities who implement major infrastructure or public service projects. We examined PPPs in the case of telecenters in Kerala and AP, where the private sector consists of small-scale home-grown entrepreneurs along with (in AP) larger companies who mediate between the state and the entrepreneurs. We show that, for historical reasons, there is an affinity between ICTD solutions and PPP models in India. Critics of PPPs have argued that these models border on pure privatization and reduce the public sector’s ability to serve the public good. We find that, with ICTD telecenters, a simple process of privatization or “outsourcing” of the state is not occurring. Instead, the state can stay engaged in project implementation and retain considerable control over its development agenda and strategy. In our two study states, the government remains a key player when it entrusts the private sector, particularly small entrepreneurs who are themselves ordinary citizens, with the responsibility of delivering public services.