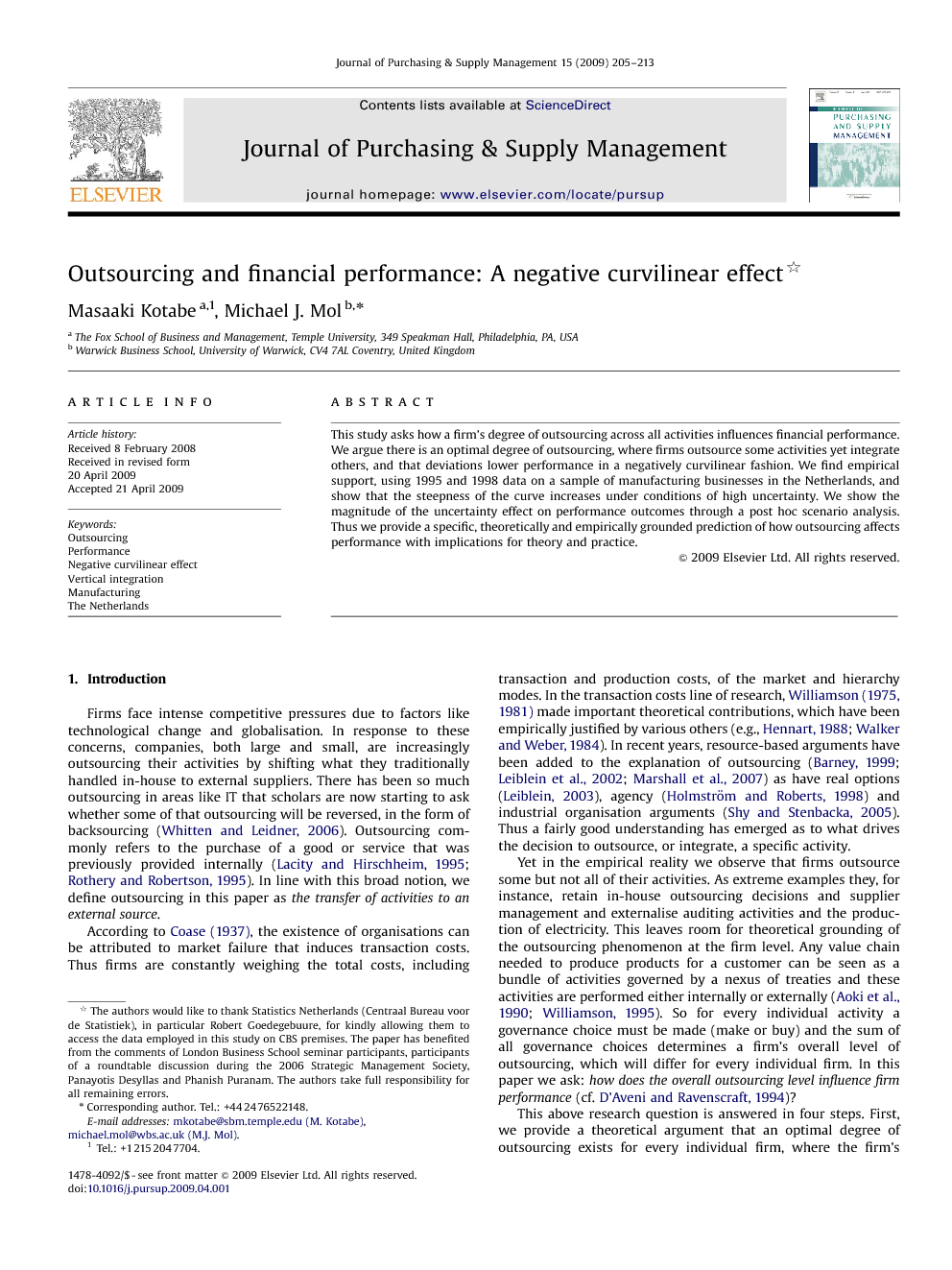 This study asks how a firm's degree of outsourcing across all activities influences financial performance. We argue there is an optimal degree of outsourcing, where firms outsource some activities yet integrate others, and that deviations lower performance in a negatively curvilinear fashion. We find empirical support, using 1995 and 1998 data on a sample of manufacturing businesses in the Netherlands, and show that the steepness of the curve increases under conditions of high uncertainty. We show the magnitude of the uncertainty effect on performance outcomes through a post hoc scenario analysis. Thus we provide a specific, theoretically and empirically grounded prediction of how outsourcing affects performance with implications for theory and practice.

Firms face intense competitive pressures due to factors like technological change and globalisation. In response to these concerns, companies, both large and small, are increasingly outsourcing their activities by shifting what they traditionally handled in-house to external suppliers. There has been so much outsourcing in areas like IT that scholars are now starting to ask whether some of that outsourcing will be reversed, in the form of backsourcing (Whitten and Leidner, 2006). Outsourcing commonly refers to the purchase of a good or service that was previously provided internally (Lacity and Hirschheim, 1995; Rothery and Robertson, 1995). In line with this broad notion, we define outsourcing in this paper as the transfer of activities to an external source. According to Coase (1937), the existence of organisations can be attributed to market failure that induces transaction costs. Thus firms are constantly weighing the total costs, including transaction and production costs, of the market and hierarchy modes. In the transaction costs line of research, Williamson, 1975 and Williamson, 1981 made important theoretical contributions, which have been empirically justified by various others (e.g., Hennart, 1988; Walker and Weber, 1984). In recent years, resource-based arguments have been added to the explanation of outsourcing (Barney, 1999; Leiblein et al., 2002; Marshall et al., 2007) as have real options (Leiblein, 2003), agency (Holmström and Roberts, 1998) and industrial organisation arguments (Shy and Stenbacka, 2005). Thus a fairly good understanding has emerged as to what drives the decision to outsource, or integrate, a specific activity.