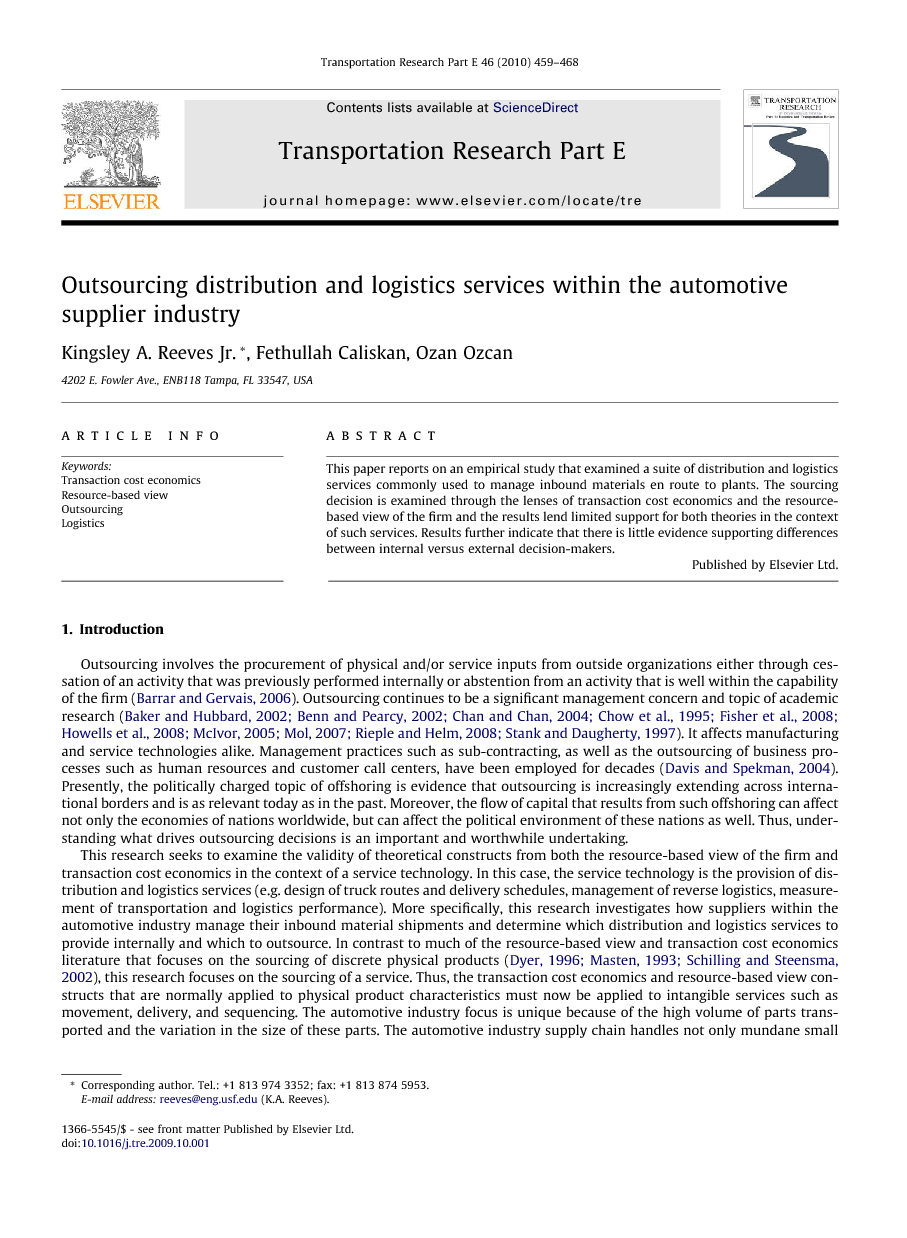 This paper reports on an empirical study that examined a suite of distribution and logistics services commonly used to manage inbound materials en route to plants. The sourcing decision is examined through the lenses of transaction cost economics and the resource-based view of the firm and the results lend limited support for both theories in the context of such services. Results further indicate that there is little evidence supporting differences between internal versus external decision-makers.

Outsourcing involves the procurement of physical and/or service inputs from outside organizations either through cessation of an activity that was previously performed internally or abstention from an activity that is well within the capability of the firm (Barrar and Gervais, 2006). Outsourcing continues to be a significant management concern and topic of academic research (Baker and Hubbard, 2002, Benn and Pearcy, 2002, Chan and Chan, 2004, Chow et al., 1995, Fisher et al., 2008, Howells et al., 2008, Mcivor, 2005, Mol, 2007, Rieple and Helm, 2008 and Stank and Daugherty, 1997). It affects manufacturing and service technologies alike. Management practices such as sub-contracting, as well as the outsourcing of business processes such as human resources and customer call centers, have been employed for decades (Davis and Spekman, 2004). Presently, the politically charged topic of offshoring is evidence that outsourcing is increasingly extending across international borders and is as relevant today as in the past. Moreover, the flow of capital that results from such offshoring can affect not only the economies of nations worldwide, but can affect the political environment of these nations as well. Thus, understanding what drives outsourcing decisions is an important and worthwhile undertaking. This research seeks to examine the validity of theoretical constructs from both the resource-based view of the firm and transaction cost economics in the context of a service technology. In this case, the service technology is the provision of distribution and logistics services (e.g. design of truck routes and delivery schedules, management of reverse logistics, measurement of transportation and logistics performance). More specifically, this research investigates how suppliers within the automotive industry manage their inbound material shipments and determine which distribution and logistics services to provide internally and which to outsource. In contrast to much of the resource-based view and transaction cost economics literature that focuses on the sourcing of discrete physical products (Dyer, 1996, Masten, 1993 and Schilling and Steensma, 2002), this research focuses on the sourcing of a service. Thus, the transaction cost economics and resource-based view constructs that are normally applied to physical product characteristics must now be applied to intangible services such as movement, delivery, and sequencing. The automotive industry focus is unique because of the high volume of parts transported and the variation in the size of these parts. The automotive industry supply chain handles not only mundane small parts like screws and fasteners; but it must also handle large and valuable cockpit modules, door assemblies, and transmissions that must arrive in a prescribed production sequence. The automotive industry is also a leading practitioner of the lean principles pioneered by Toyota (Liker, 2004, Womack and Jones, 1996 and Womack et al., 1990), including just-in-time shipments, small batch sizes, and low inventories. Such lean practices make distribution and logistics services of critical importance within the industry. Thus, this inherent complexity and criticality make this particular industry context of particular interest. There is a unique dynamic of countervailing forces. On one hand, the criticality of the services rendered would argue for increased control and hierarchical organization. On the other hand, the seemingly generic nature of transportation and logistics services would suggest a competitive market purchase.

The results of this research lend limited support to the applicability of resource-based view constructs and transaction cost economics constructs to service technologies versus discrete physical products. Though many of the constructs were not statistically significant, the direction of the relationships was consistent with theoretical expectations. Thus, it is expected that the outsourcing decision-making process that governs discrete technologies is the same for those governing services. Moreover, it is expected that the technology characteristics that determine whether or not a manufacturing process or physical sub-assembly will be outsourced are the same when the sourcing decision concerns the sourcing of human resource management functions, research and development, or, as in this research, distribution and logistics services. This is an important finding in an era where distribution and logistics can play a critical role in an organization’s ongoing competitiveness (e.g. because of an emphasis on adhering to lean principles). Not only are distribution and logistics functions important, but there are many options for governing such functions as well. Companies can: (1) develop and provide such services internally (insourcing), (2) procure the services from a third party logistics firm, or (3) a hybrid approach where some of the service are provided in-house and others are outsourced. Moreover, with the development of so-called fourth party logistics firms, companies yield more control to external decision-makers to make sourcing decisions (including the selection of third party logistics providers).