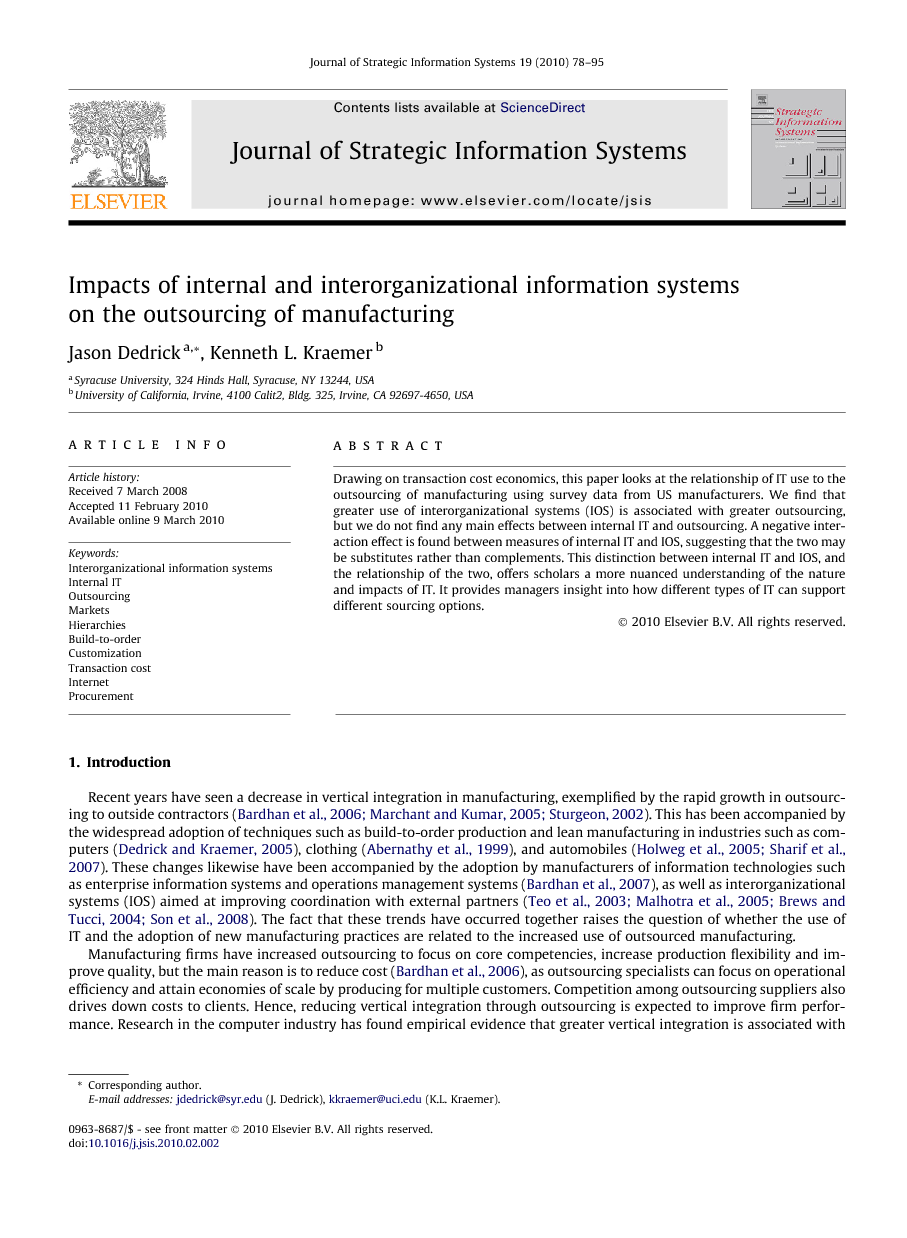 Drawing on transaction cost economics, this paper looks at the relationship of IT use to the outsourcing of manufacturing using survey data from US manufacturers. We find that greater use of interorganizational systems (IOS) is associated with greater outsourcing, but we do not find any main effects between internal IT and outsourcing. A negative interaction effect is found between measures of internal IT and IOS, suggesting that the two may be substitutes rather than complements. This distinction between internal IT and IOS, and the relationship of the two, offers scholars a more nuanced understanding of the nature and impacts of IT. It provides managers insight into how different types of IT can support different sourcing options.

Recent years have seen a decrease in vertical integration in manufacturing, exemplified by the rapid growth in outsourcing to outside contractors (Bardhan et al., 2006, Marchant and Kumar, 2005 and Sturgeon, 2002). This has been accompanied by the widespread adoption of techniques such as build-to-order production and lean manufacturing in industries such as computers (Dedrick and Kraemer, 2005), clothing (Abernathy et al., 1999), and automobiles (Holweg et al., 2005 and Sharif et al., 2007). These changes likewise have been accompanied by the adoption by manufacturers of information technologies such as enterprise information systems and operations management systems (Bardhan et al., 2007), as well as interorganizational systems (IOS) aimed at improving coordination with external partners (Teo et al., 2003, Malhotra et al., 2005, Brews and Tucci, 2004 and Son et al., 2008). The fact that these trends have occurred together raises the question of whether the use of IT and the adoption of new manufacturing practices are related to the increased use of outsourced manufacturing. Manufacturing firms have increased outsourcing to focus on core competencies, increase production flexibility and improve quality, but the main reason is to reduce cost (Bardhan et al., 2006), as outsourcing specialists can focus on operational efficiency and attain economies of scale by producing for multiple customers. Competition among outsourcing suppliers also drives down costs to clients. Hence, reducing vertical integration through outsourcing is expected to improve firm performance. Research in the computer industry has found empirical evidence that greater vertical integration is associated with lower performance (Peyrefitte and Golden, 2004) but others have found that an optimal mix of vertical integration and strategic outsourcing can lead to better performance (Rothaermel et al., 2006).