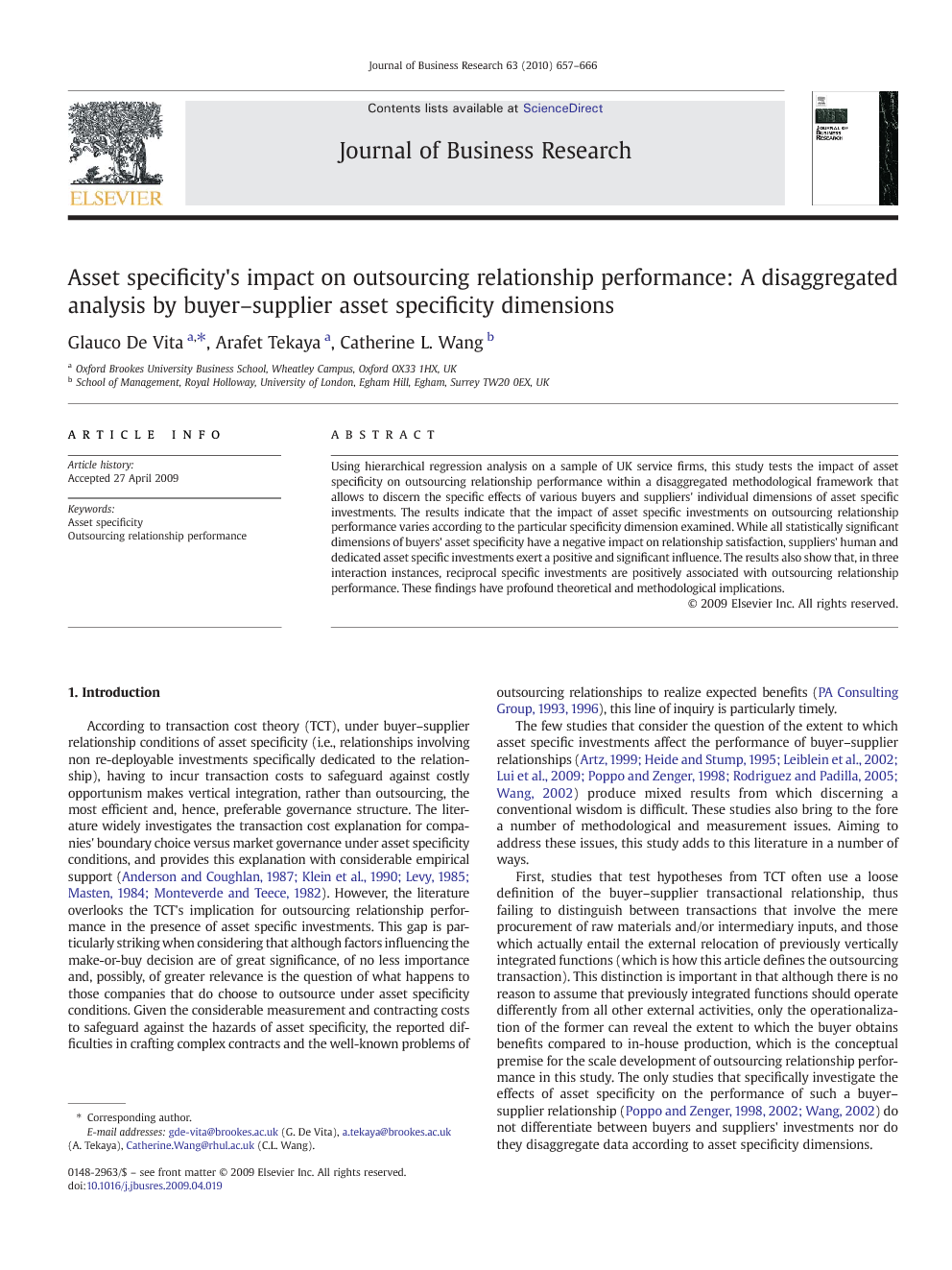 According to transaction cost theory (TCT), under buyer–supplier relationship conditions of asset specificity (i.e., relationships involving non re-deployable investments specifically dedicated to the relationship), having to incur transaction costs to safeguard against costly opportunism makes vertical integration, rather than outsourcing, the most efficient and, hence, preferable governance structure. The literature widely investigates the transaction cost explanation for companies' boundary choice versus market governance under asset specificity conditions, and provides this explanation with considerable empirical support (Anderson and Coughlan, 1987, Klein et al., 1990, Levy, 1985, Masten, 1984 and Monteverde and Teece, 1982). However, the literature overlooks the TCT's implication for outsourcing relationship performance in the presence of asset specific investments. This gap is particularly striking when considering that although factors influencing the make-or-buy decision are of great significance, of no less importance and, possibly, of greater relevance is the question of what happens to those companies that do choose to outsource under asset specificity conditions. Given the considerable measurement and contracting costs to safeguard against the hazards of asset specificity, the reported difficulties in crafting complex contracts and the well-known problems of outsourcing relationships to realize expected benefits (PA Consulting Group, 1993 and PA Consulting Group, 1996), this line of inquiry is particularly timely. The few studies that consider the question of the extent to which asset specific investments affect the performance of buyer–supplier relationships (Artz, 1999, Heide and Stump, 1995, Leiblein et al., 2002 and Lui et al., 2009Poppo and Zenger, 1998;Poppo and Zenger, 1998, Rodriguez and Padilla, 2005 and Wang, 2002) produce mixed results from which discerning a conventional wisdom is difficult. These studies also bring to the fore a number of methodological and measurement issues. Aiming to address these issues, this study adds to this literature in a number of ways.

The lack of empirical studies that adopt a disaggregated analytical framework for the treatment of AS as well as differences in the operationalization of several constructs, including “outsourcing transaction” and “performance” makes the comparison with previous results, at best, difficult. Nevertheless, it is worth pointing out that the results in relation to H1a are consistent with those by Artz (1999), who in two of his three models finds that buyer-specific assets increase “transaction costs” and decrease “buyer satisfaction”, and those by Heide and Stump (1995), who find that buyer-specific assets have negative effects on “relationship performance”. The results of the present study also validate, and are corroborated by, those of Leiblein et al. (2002), who find that deviation from the optimal form of governance as dictated by transactional characteristics, has a negative effect on “technological performance” when contractual safeguards are inadequate for the hazards present in a given relationship. The results partially support H2, since only some dimensions of reciprocal investments positively affect relationship performance. The statistical insignificance of most of the interaction terms may relate to the value of the mutually sacrificed hostages. Since low values in our estimated interaction terms also represent reciprocity by mutually low AS, it is reasonable to suppose that while symmetrical specific investments of low value may signal sufficiently credible commitments to reduce the problem of moral hazard, such commitments may be insufficient to generate a positive effect on relationship performance. These results complement those by Artz (1999), who uses data from the manufacturing sector, though the disaggregated framework employed in the present study is more informative by additionally revealing which specific AS dimensions display significant interactions.