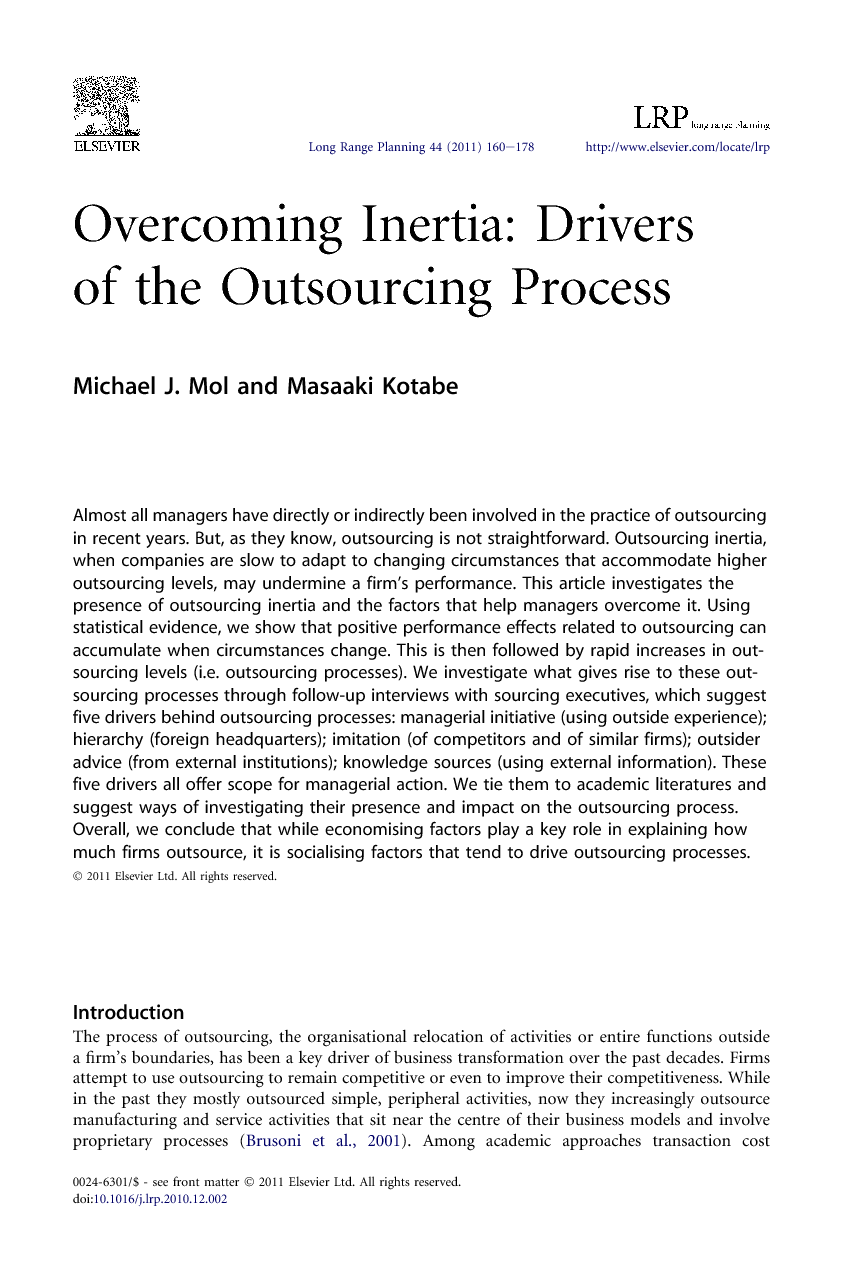 Almost all managers have directly or indirectly been involved in the practice of outsourcing in recent years. But, as they know, outsourcing is not straightforward. Outsourcing inertia, when companies are slow to adapt to changing circumstances that accommodate higher outsourcing levels, may undermine a firm’s performance. This article investigates the presence of outsourcing inertia and the factors that help managers overcome it. Using statistical evidence, we show that positive performance effects related to outsourcing can accumulate when circumstances change. This is then followed by rapid increases in outsourcing levels (i.e. outsourcing processes). We investigate what gives rise to these outsourcing processes through follow-up interviews with sourcing executives, which suggest five drivers behind outsourcing processes: managerial initiative (using outside experience); hierarchy (foreign headquarters); imitation (of competitors and of similar firms); outsider advice (from external institutions); knowledge sources (using external information). These five drivers all offer scope for managerial action. We tie them to academic literatures and suggest ways of investigating their presence and impact on the outsourcing process. Overall, we conclude that while economising factors play a key role in explaining how much firms outsource, it is socialising factors that tend to drive outsourcing processes.

The process of outsourcing, the organisational relocation of activities or entire functions outside a firm’s boundaries, has been a key driver of business transformation over the past decades. Firms attempt to use outsourcing to remain competitive or even to improve their competitiveness. While in the past they mostly outsourced simple, peripheral activities, now they increasingly outsource manufacturing and service activities that sit near the centre of their business models and involve proprietary processes (Brusoni et al., 2001). Among academic approaches transaction cost economics (TCE) (Walker and Weber, 1984 and Williamson, 1985), related contracting approaches (Holmström and Roberts, 1998), and the resource-based view of the firm (RBV) (Barney, 1999), have been particularly instrumental in explaining outsourcing levels. A relatively straightforward explanation of the costs of wrongful managerial decision-making has emerged (Leiblein et al., 2002, Masten, 1993 and Williamson, 1991) in that a failure to align governance modes with transaction characteristics and firm resources induces efficiency losses, which eventually lead to firm failure. The argument suggests that managers will shift between the governance modes of make or buy whenever appropriate. Given alignment, the level of outsourcing itself is believed not to directly influence organisational performance or competitive advantage because once an optimum set of decisions has been reached, no further performance gains will be obtained by outsourcing more or less and organisations in principal have no incentive to deviate from that optimum. Yet practical puzzles remain that cannot be explained through this view of outsourcing, which Oliver Williamson (1991), calls economising. For instance, some firms remain vertically integrated for a long time in the face of substantial change in their technological and institutional environments that shifts the balance between transaction and production costs to allow for more outsourcing (Afuah, 2001). The US automotive industry long remained too vertically integrated until it recognised that the success of its Japanese competitors was aided by their reliance on keiretsu alliances with external suppliers (Womack et al., 1990). The process of outsourcing often appears to take place in rapid (industry-wide) waves, during which every manager wants to be seen engaged in outsourcing (Bettis et al., 1992 and Kotabe, 1998). Once the Detroit Big Three realised that Japanese firms were playing the game differently, they quickly and collectively copied Japanese practices of substantial outsourcing of key manufacturing activities and more co-operation with suppliers, albeit with mixed success (Dyer, 1996 and Kotabe, 1998). Understanding whether such resistance to change affects performance negatively, and what drivers eventually help firms overcome that resistance could help both practitioners and researchers.

In this article we presented the concept of outsourcing inertia as a useful way of characterising why organisations do not make perfect and immediate adjustments to their outsourcing levels when (environmental) circumstances change. We showed that such inertia leads to unexploited performance potential which may lead to rapid outsourcing. We then focused on what triggers the outsourcing process and suggested five different drivers. Reflecting on these drivers we provided managers with advice on how to manage the outsourcing process. More research on what triggers outsourcing processes, how these processes unfold and what performance implications flow from them can inform academic thinking and provide valuable guidelines for managers who are involved in outsourcing decision making.