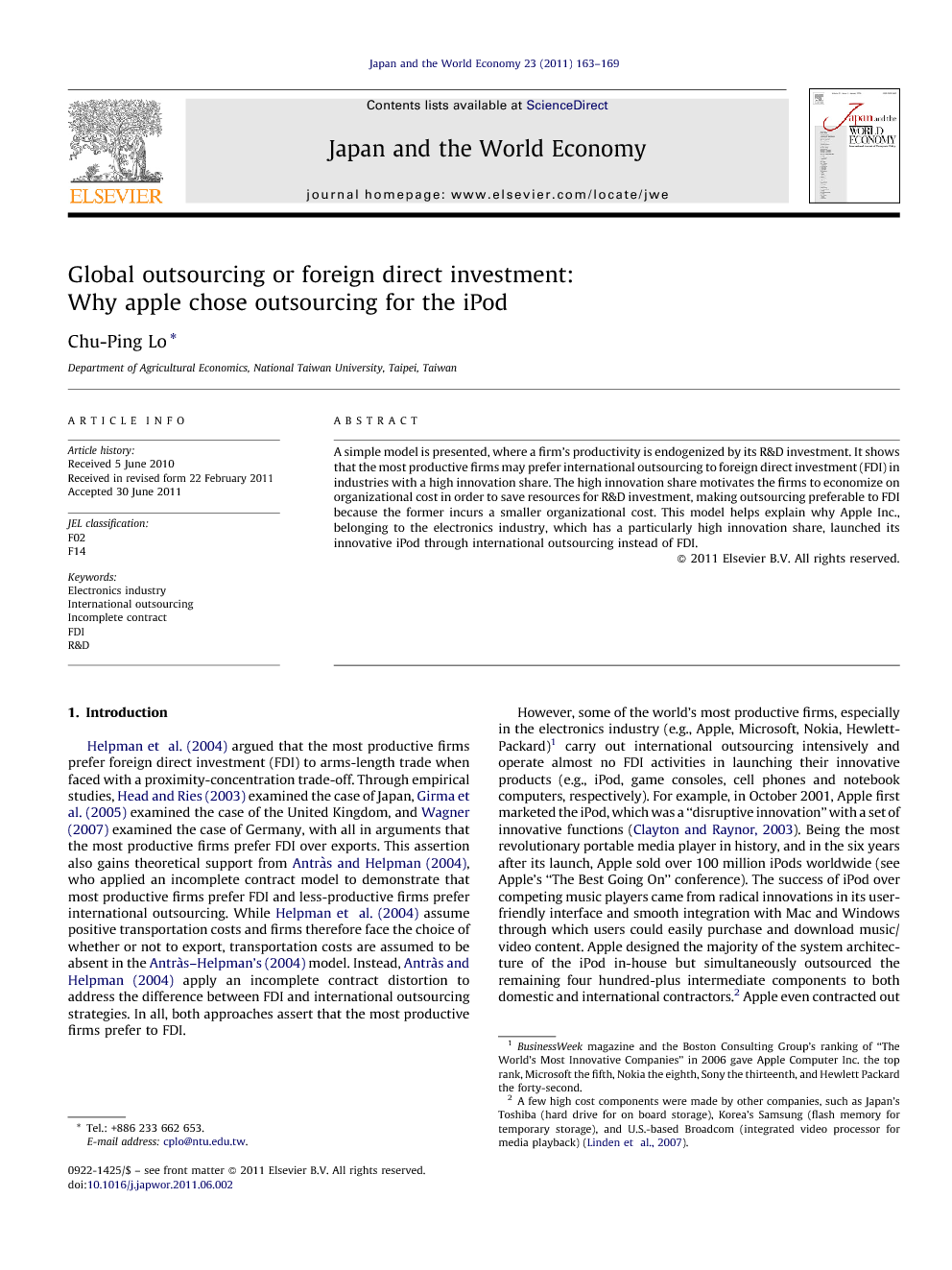 A simple model is presented, where a firm's productivity is endogenized by its R&D investment. It shows that the most productive firms may prefer international outsourcing to foreign direct investment (FDI) in industries with a high innovation share. The high innovation share motivates the firms to economize on organizational cost in order to save resources for R&D investment, making outsourcing preferable to FDI because the former incurs a smaller organizational cost. This model helps explain why Apple Inc., belonging to the electronics industry, which has a particularly high innovation share, launched its innovative iPod through international outsourcing instead of FDI.

Helpman et al. (2004) argued that the most productive firms prefer foreign direct investment (FDI) to arms-length trade when faced with a proximity-concentration trade-off. Through empirical studies, Head and Ries (2003) examined the case of Japan, Girma et al. (2005) examined the case of the United Kingdom, and Wagner (2007) examined the case of Germany, with all in arguments that the most productive firms prefer FDI over exports. This assertion also gains theoretical support from Antràs and Helpman (2004), who applied an incomplete contract model to demonstrate that most productive firms prefer FDI and less-productive firms prefer international outsourcing. While Helpman et al. (2004) assume positive transportation costs and firms therefore face the choice of whether or not to export, transportation costs are assumed to be absent in the Antràs–Helpman's (2004) model. Instead, Antràs and Helpman (2004) apply an incomplete contract distortion to address the difference between FDI and international outsourcing strategies. In all, both approaches assert that the most productive firms prefer to FDI. However, some of the world's most productive firms, especially in the electronics industry (e.g., Apple, Microsoft, Nokia, Hewlett-Packard)1 carry out international outsourcing intensively and operate almost no FDI activities in launching their innovative products (e.g., iPod, game consoles, cell phones and notebook computers, respectively). For example, in October 2001, Apple first marketed the iPod, which was a “disruptive innovation” with a set of innovative functions (Clayton and Raynor, 2003). Being the most revolutionary portable media player in history, and in the six years after its launch, Apple sold over 100 million iPods worldwide (see Apple's “The Best Going On” conference). The success of iPod over competing music players came from radical innovations in its user-friendly interface and smooth integration with Mac and Windows through which users could easily purchase and download music/video content. Apple designed the majority of the system architecture of the iPod in-house but simultaneously outsourced the remaining four hundred-plus intermediate components to both domestic and international contractors.2 Apple even contracted out its core software; for example, the user interface was designed with the help of Pixo, and the reference platform was designed by PortalPlayer (Kahney, 2006). Of the $299 retail price for the 30GB video iPod, Apple accounted for a 25 percent share of the value for the core software design, while 36 percent is attributed to contracted manufacturers in the low-wage Asia-Pacific region that provide generic components and direct labor (Linden et al., 2007).3 Examples of the generic components and direct labor include the metal casing, provided by Taiwan's Foxconn, and assembly, completed in Chinese factories owned by Taiwanese firms such as Inventee Appliances and Foxconn (Einhorn, 2007). The pattern of global outsourcing also occurs with other electronics products, such as Hewlett-Packard's notebook computers, with 39 percent of the value of a notebook computer attributable to generic inputs and direct labor.

The difference in innovation share among industries impacts the firms’ global organizational form. In an industry with a high innovation share, the Northern firm tends to economize on organizational investment in order to put more efforts into R&D investment while R&D investment and organizational costs are substitutive. That is, the firms in an industry with a larger innovation share are encouraged to devote more resources to R&D investment, ceteris paribus, in order to increase productivity and enlarge revenue but while simultaneously choosing a lower cost of global organizational from in order to minimize the aggregate nonproduction costs. While an increase in revenue (due to an increase in R&D investment) enlarges an opportunity cost of underinvestment for the two parties involved, the most productive firms in those industries with a larger innovation share tend to prefer international outsourcing to FDI while the incomplete contract distortion is restrained. This model helps explain why the world's most productive firms, such as Apple, Nokia, Microsoft, and HP (all in the electronics industry), often prefer international outsourcing to FDI when launching innovative products.