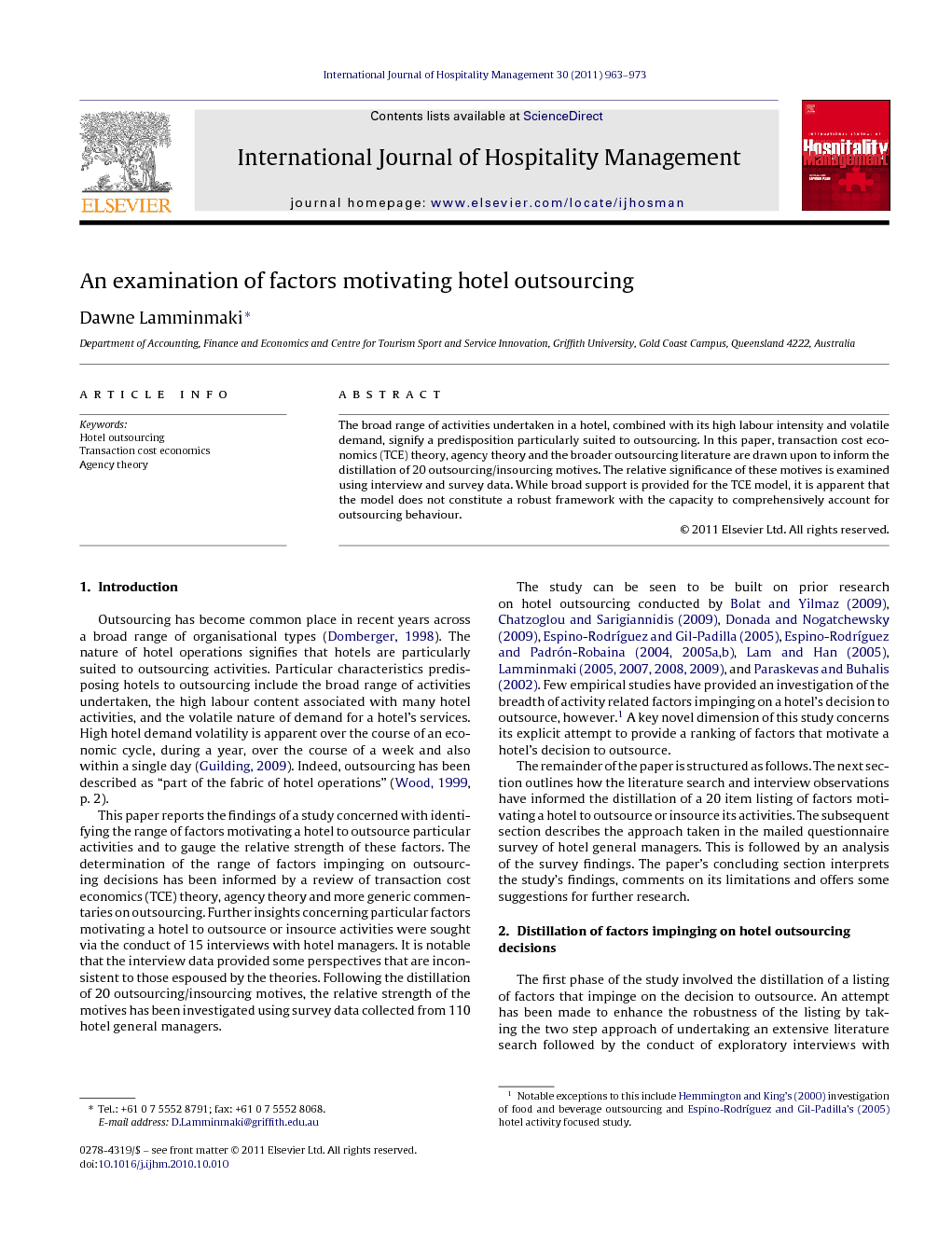 The broad range of activities undertaken in a hotel, combined with its high labour intensity and volatile demand, signify a predisposition particularly suited to outsourcing. In this paper, transaction cost economics (TCE) theory, agency theory and the broader outsourcing literature are drawn upon to inform the distillation of 20 outsourcing/insourcing motives. The relative significance of these motives is examined using interview and survey data. While broad support is provided for the TCE model, it is apparent that the model does not constitute a robust framework with the capacity to comprehensively account for outsourcing behaviour.

Outsourcing has become common place in recent years across a broad range of organisational types (Domberger, 1998). The nature of hotel operations signifies that hotels are particularly suited to outsourcing activities. Particular characteristics predisposing hotels to outsourcing include the broad range of activities undertaken, the high labour content associated with many hotel activities, and the volatile nature of demand for a hotel's services. High hotel demand volatility is apparent over the course of an economic cycle, during a year, over the course of a week and also within a single day (Guilding, 2009). Indeed, outsourcing has been described as “part of the fabric of hotel operations” (Wood, 1999, p. 2). This paper reports the findings of a study concerned with identifying the range of factors motivating a hotel to outsource particular activities and to gauge the relative strength of these factors. The determination of the range of factors impinging on outsourcing decisions has been informed by a review of transaction cost economics (TCE) theory, agency theory and more generic commentaries on outsourcing. Further insights concerning particular factors motivating a hotel to outsource or insource activities were sought via the conduct of 15 interviews with hotel managers. It is notable that the interview data provided some perspectives that are inconsistent to those espoused by the theories. Following the distillation of 20 outsourcing/insourcing motives, the relative strength of the motives has been investigated using survey data collected from 110 hotel general managers. The study can be seen to be built on prior research on hotel outsourcing conducted by Bolat and Yilmaz (2009), Chatzoglou and Sarigiannidis (2009), Donada and Nogatchewsky (2009), Espino-Rodríguez and Gil-Padilla (2005), Espino-Rodríguez and Padrón-Robaina, 2004, Espino-Rodríguez and Padrón-Robaina, 2005a and Espino-Rodríguez and Padrón-Robaina, 2005b, Lam and Han (2005), Lamminmaki, 2005, Lamminmaki, 2007, Lamminmaki, 2008 and Lamminmaki, 2009, and Paraskevas and Buhalis (2002). Few empirical studies have provided an investigation of the breadth of activity related factors impinging on a hotel's decision to outsource, however.1 A key novel dimension of this study concerns its explicit attempt to provide a ranking of factors that motivate a hotel's decision to outsource.

The broad objective of this study was to further our appreciation of factors that motivate a hotel to outsource or insource its activities. A key distinguishing facet of the study concerns the fact that it has been informed by several theoretical perspectives and not a single theoretical model. The view has been taken that a more complete appreciation of hotel outsourcing will result from simultaneously viewing the phenomenon through a range of pertinent theoretical lenses and perspectives outlined in the hotel management and outsourcing management literatures. Recognising that no theory is all encompassing and that theories suffer from a variety of limitations, a triangulation approach has been adopted. The first main contribution of the study concerns the distillation of 20 factors that can bear down on a hotel's decision to outsource its activities. No prior study offering such an extensive listing of causal factors influencing outsourcing decision making has been found in the literature. A second contribution of the study concerns its examination of TCE theory in a hotel management context. TCE theory provided the motivation for 10 of the 20 factors examined. The third contribution of the study relates to insights provided in connection with what factors are most influential in a hotel's outsourcing decision making process. Carter and Hodgson's (2006) review of TCE based empirical studies concludes that the findings have been mixed and that studies frequently represent only a partial examination of the TCE model, with the primary focus generally directed towards examining only the asset specificity attribute (David and Han, 2004). This study has involved an examination of all three activity attributes generally associated with TCE theory, i.e.: frequency, uncertainty, and asset specificity. The TCE theory examination has been pursued by not only appraising hotel managers’ perspectives of outsourcing factors motivated by the theory, the study has also examined hotel managers’ perceived importance of factors that conflict with TCE theory. The examination of the extent to which hotels outsource many activities because they are large and the hotel can negotiate favourable outsourcing terms (Statement O-T2) represents a clear challenge to the fundamental ‘frequency’ tenet of TCE theory that holds that activities conducted frequently, or ‘to a large extent’, will tend not to be outsourced (Colbert and Spicer, 1995). This challenge constitutes an advancement to earlier research.