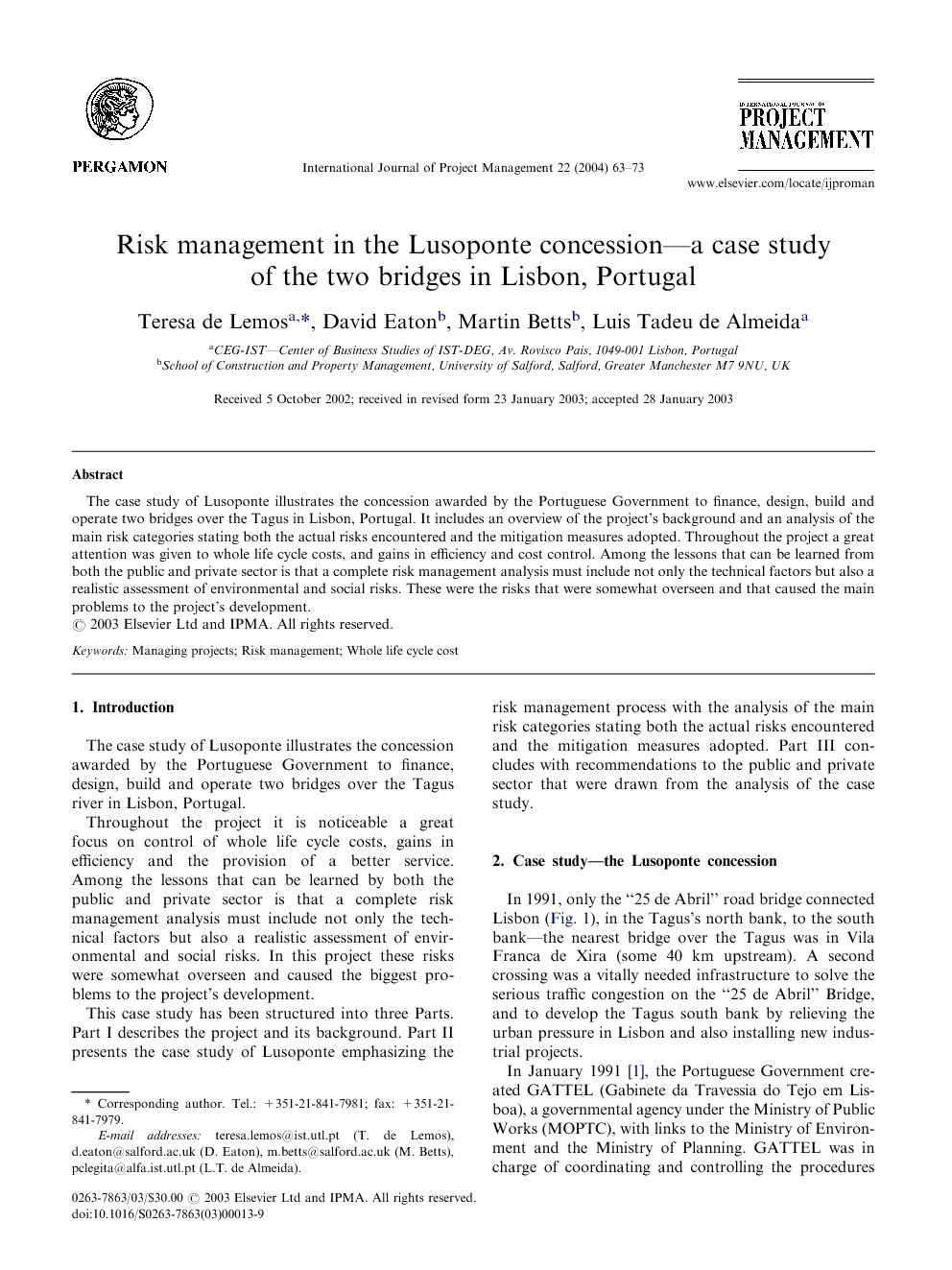 The case study of Lusoponte illustrates the concession awarded by the Portuguese Government to finance, design, build and operate two bridges over the Tagus in Lisbon, Portugal. It includes an overview of the project's background and an analysis of the main risk categories stating both the actual risks encountered and the mitigation measures adopted. Throughout the project a great attention was given to whole life cycle costs, and gains in efficiency and cost control. Among the lessons that can be learned from both the public and private sector is that a complete risk management analysis must include not only the technical factors but also a realistic assessment of environmental and social risks. These were the risks that were somewhat overseen and that caused the main problems to the project's development.

The case study of Lusoponte illustrates the concession awarded by the Portuguese Government to finance, design, build and operate two bridges over the Tagus river in Lisbon, Portugal. Throughout the project it is noticeable a great focus on control of whole life cycle costs, gains in efficiency and the provision of a better service. Among the lessons that can be learned by both the public and private sector is that a complete risk management analysis must include not only the technical factors but also a realistic assessment of environmental and social risks. In this project these risks were somewhat overseen and caused the biggest problems to the project's development. This case study has been structured into three Parts. Part I describes the project and its background. Part II presents the case study of Lusoponte emphasizing the risk management process with the analysis of the main risk categories stating both the actual risks encountered and the mitigation measures adopted. Part III concludes with recommendations to the public and private sector that were drawn from the analysis of the case study.

Portugal witnessed in the last years a major increase in the launching of public projects that utilised private funding and adopted a model which is closely based on the UK model for PPP/PFI. Nevertheless the two countries have different economic, social and regulatory environments and consequently the risks involved in each country are specific. The analysis of Lusoponte permitted to conclude that in Portugal this procurement model induced a marked effect on corporate culture in comparison to the prevalent organisational culture in other Portuguese companies. There is a greater emphasis (and improving) in efficiency, effectiveness, cost consciousness, whole-life cycle costing, accountability and also the notion that the client is important both in terms of safety and satisfaction. As the concessionaire is responsible for both the construction and maintenance, it has a strong incentive to minimise costs on a whole-life cycle basis, and not to pursue initially cheaper solutions that in the long run would be more expensive. Also, the process is totally transparent. The culture of Portuguese construction is very much towards secrecy regarding accounting issues. Traditionally this is very closed sector. At first, it was very difficult for them to adapt to a culture of complete disclosure of information, as is necessary when dealing with a project finance structure. The most important issue that occurred in Lusponte was the extensive litigation between Lusoponte and GATTEL and especially the indemnity regarding the claims of loss for revenues in the “25 de Abril” Bridge imposed unilaterally by the government. This led to issues with very high social and political visibility that were not well explained and the image portrayed by the media (and some political parties) was that the project was costing a lot of taxpayers money. This negative image was even extrapolated to the essence of project finance, creating the assumption that this type of financing was expensive and likely to need a lot of taxpayers' money and consequently pawning future generations. The knowledge and experience gained has been incorporated well within the private sector. Some Portuguese members of the consortium subsequently participated successfully in subsequent tenders in the transport sector, for example Design Build Finance and Operate (DBFO) roads. In contrast, knowledge management is a weak point for the government. The negotiation team of the government represented by GATTEL had no formal procedure to disseminate the knowledge and experience gained during the negotiation and construction stages. When GATTEL dismantled this knowledge was lost for the government, since different people will conduct future projects and no formal procedure to retain the knowledge is in place. Also, during the negotiation as the government changed, most members of the negotiation team were replaced and had no previous knowledge of the contracts in discussion. The government has put itself in a weak negotiation position. That is one of the reasons as to why it is important to profit from lessons that can be drawn from the analysis of the current case study. The most important ones are: • Don't underestimate the environmental issues. This led to the signing of contracts without an approved EIA. Between the award of the concession to Lusoponte in June 1994 and the approval of the EIA in February 1995 there was a period of indecisiveness as to the viability of the project. Until February 1995, there was no certainty regarding the availability of funds, and although the concessionaire undertook all the actions to start construction it took the risk that the project wouldn't be approved. Nevertheless it is important to note that some environmental impacts were positive as the remediation of degraded areas, like the salt pans which were in ruin. • Don't underestimate social risks. For example the social impact of raising tolls on a bridge that by common knowledge had already been paid for. The public perception being that in due time it would be without toll. • The need for having a stable design and predefined scope of works (no additional works) at the time of the signing of the contract was undermined by the public partner. After the signing it kept asking for additional works and revisions in light of the prevalent philosophy of projects financed the traditional way by the Government. This led to a high level of litigation and claims from the private partner. This procedure is common in the traditional methods of procurement where the client keeps asking for alterations and the constructor presents new cost estimates for additional works. This usually leads to significant cost overruns in the projects. Lastly it is important to stress that adequate human resources are critical. The public sector would have difficulty attracting people with the adequate skills to manage a project like Lusoponte. The private sector has total liberty to reward its employees according to merit, which is very difficult to achieve in the public sector where people are included in a very low pay, inflexible structure. This project, by being taken by the private sector, can attract adequate human resources, motivating them, and consequently achieving a better efficiency in running the company. In conclusion, the concession route with its project and contract management more controlled, when compared with the traditional methods of procurement, is more likely to ensure that the projects will be “on time” and “on budget”. The PFI as the concession model utilised in Lusoponte has provided focus on efficiency gains, cost control and provision of a better service, thus assuring the delivery of a service on a guaranteed benchmark, but in future projects it is necessary the existence of a systemic and holistic risk management system to ensure that all risks are properly assessed and managed to avoid wishful thinking attitudes that were prevalent in Lusoponte specially regarding environmental and social risks.