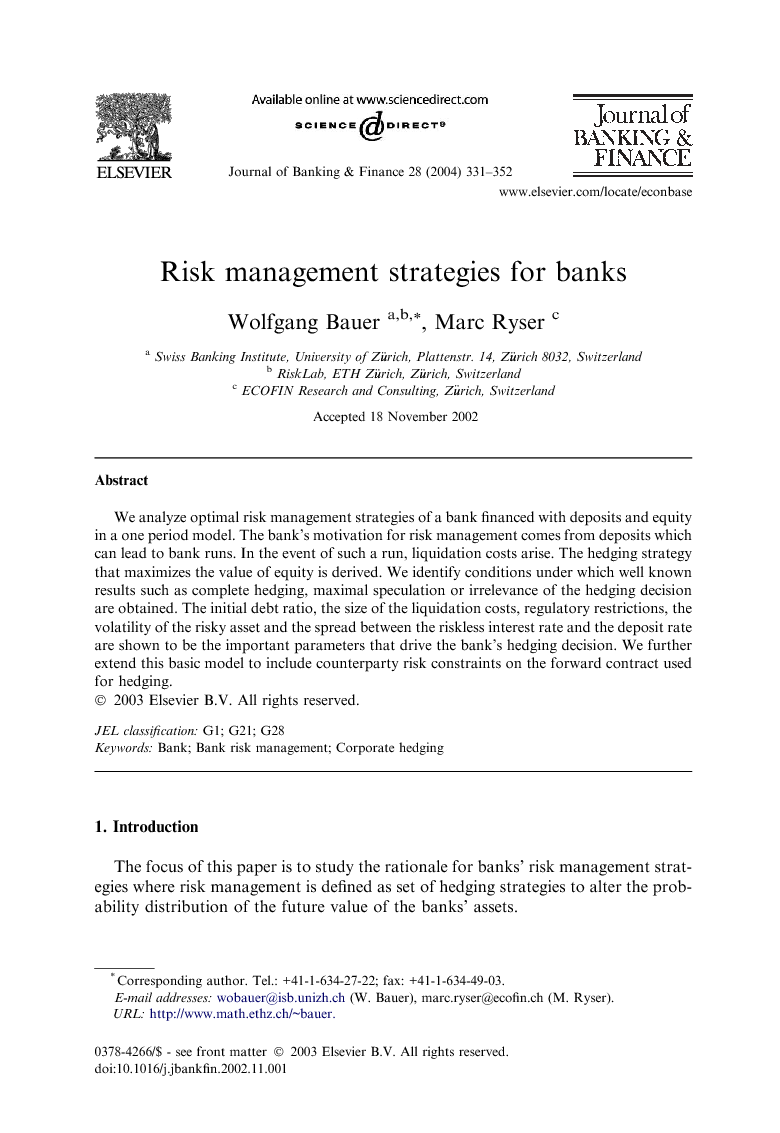 We analyze optimal risk management strategies of a bank financed with deposits and equity in a one period model. The bank’s motivation for risk management comes from deposits which can lead to bank runs. In the event of such a run, liquidation costs arise. The hedging strategy that maximizes the value of equity is derived. We identify conditions under which well known results such as complete hedging, maximal speculation or irrelevance of the hedging decision are obtained. The initial debt ratio, the size of the liquidation costs, regulatory restrictions, the volatility of the risky asset and the spread between the riskless interest rate and the deposit rate are shown to be the important parameters that drive the bank’s hedging decision. We further extend this basic model to include counterparty risk constraints on the forward contract used for hedging.

We have presented a one-period model in which we analyze the bank’s risk management decision. The bank is regulatory restricted, financed by deposits and is subject to liquidation costs in the event of a bank run. We find that the common interpretation of equity as an ordinary call option does not apply: Equity value is not always increased by increasing the asset’s volatility, since this also raises the likelihood of a bank run. Whenever the expected costs of such a run for shareholders cannot be outweighed by an increase of the expected return (because regulatory restrictions limit the maximum achievable risk), it is not optimal to take as much risk as possible. In these cases, safe banks with low debt ratios and asset volatility can still augment their risk exposure to the point where downside loss comes into play. However, for banks with a high debt ratio and a high asset volatility, risk reduction is the optimal strategy. This deterrence of asset substitution however vanishes in the absence of regulatory constraints or with a complete deposit insurance (Calomiris and Kahn, 1991): Without the possible downside loss, the equity payoff would be that of an ordinary call option and it would always be optimal for the bank to take as much risk as possible. Also, without regulatory restrictions, the possible downside loss could always be outweighed by higher expected return through higher risk-exposures. On the other hand, depending on how much risk taking regulatory or other restrictions allow, it may not be optimal for the bank to hedge completely as in Froot and Stein (1998): Because equity features limited liability, risk shifting to depositors is still preferred as long as the higher expected return outweighs the possible downside loss. The less restrictive regulatory restrictions are, the more relevant becomes this strategy of asset substitution. Without any restrictions of regulators or counter parties, asset substitution would always be the optimal strategy. Further, there is one constellation for which the hedging decision is shown to be irrelevant, which coincides with the result of the Modigliani–Miller-theorem. This, however, is only a special situation, where the risk management restrictions, the size of the liquidation costs in case of a bank run and the initial debt ratio are all set such that risk shifting to depositors is impossible and no bank run takes place. Among the open questions remains the analysis of the hedging decision in a multiperiod setting. Bauer and Ryser (2002) have looked at the effect that the bank’s franchise value of deposits then has. It gives an incentive to reduce risk taking since the whole stream of future income from deposit services would be lost in a run situation. Furthermore, it would be interesting to analyze the hedging decision in the presence of a nontradeable proprietary bank asset that generates an extra rent as in Diamond and Rajan (2000). The market completeness breaks down in this case and the determination of a unique objective function for the bank is not trivial anymore.