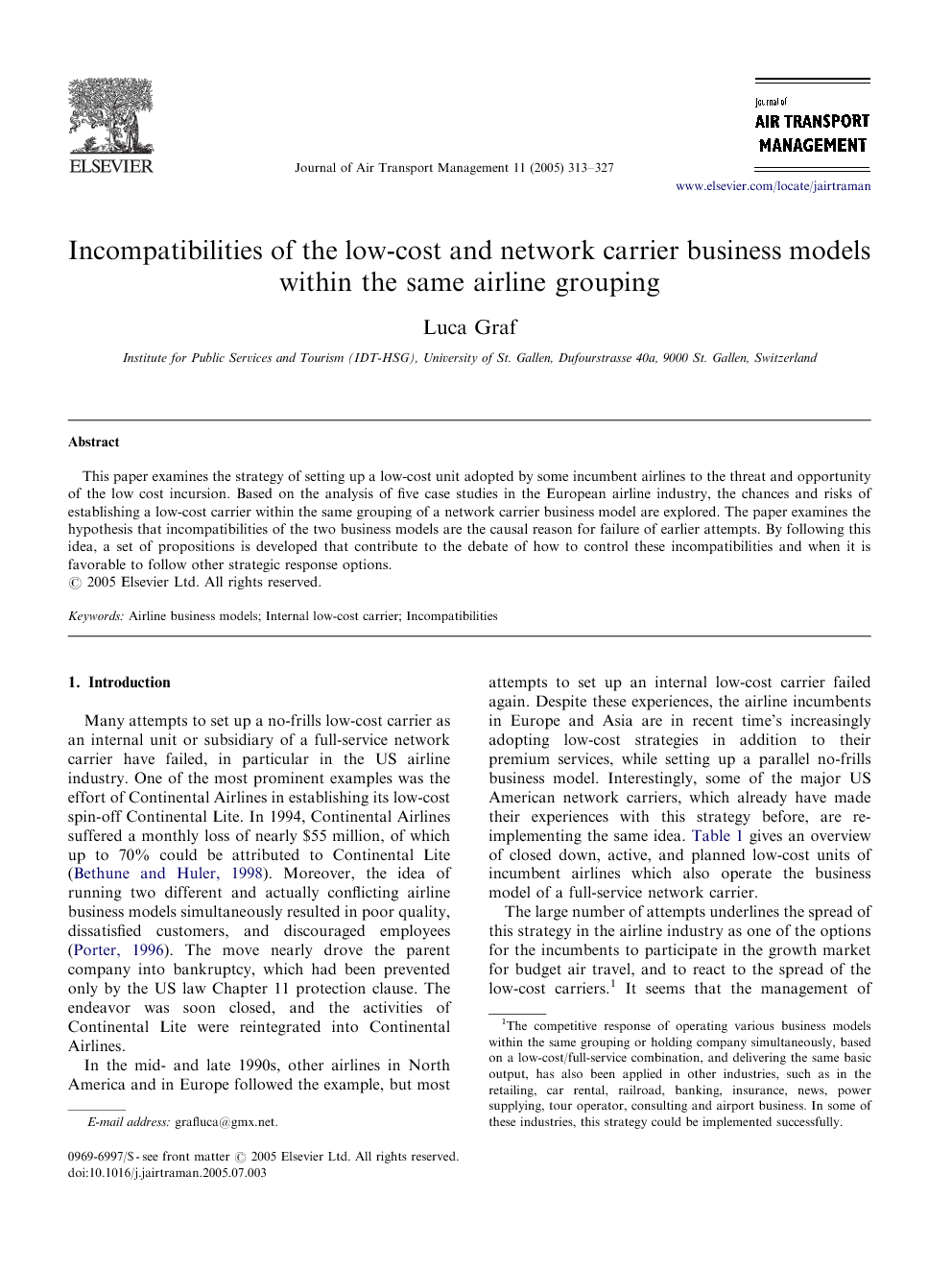 This paper examines the strategy of setting up a low-cost unit adopted by some incumbent airlines to the threat and opportunity of the low cost incursion. Based on the analysis of five case studies in the European airline industry, the chances and risks of establishing a low-cost carrier within the same grouping of a network carrier business model are explored. The paper examines the hypothesis that incompatibilities of the two business models are the causal reason for failure of earlier attempts. By following this idea, a set of propositions is developed that contribute to the debate of how to control these incompatibilities and when it is favorable to follow other strategic response options.

Many attempts to set up a no-frills low-cost carrier as an internal unit or subsidiary of a full-service network carrier have failed, in particular in the US airline industry. One of the most prominent examples was the effort of Continental Airlines in establishing its low-cost spin-off Continental Lite. In 1994, Continental Airlines suffered a monthly loss of nearly $55 million, of which up to 70% could be attributed to Continental Lite (Bethune and Huler, 1998). Moreover, the idea of running two different and actually conflicting airline business models simultaneously resulted in poor quality, dissatisfied customers, and discouraged employees (Porter, 1996). The move nearly drove the parent company into bankruptcy, which had been prevented only by the US law Chapter 11 protection clause. The endeavor was soon closed, and the activities of Continental Lite were reintegrated into Continental Airlines. In the mid- and late 1990s, other airlines in North America and in Europe followed the example, but most attempts to set up an internal low-cost carrier failed again. Despite these experiences, the airline incumbents in Europe and Asia are in recent time's increasingly adopting low-cost strategies in addition to their premium services, while setting up a parallel no-frills business model. Interestingly, some of the major US American network carriers, which already have made their experiences with this strategy before, are re-implementing the same idea. Table 1 gives an overview of closed down, active, and planned low-cost units of incumbent airlines which also operate the business model of a full-service network carrier. The large number of attempts underlines the spread of this strategy in the airline industry as one of the options for the incumbents to participate in the growth market for budget air travel, and to react to the spread of the low-cost carriers.1 It seems that the management of these airlines is not completely aware of the negative impacts and the reasons behind these, and hypothesizes that incompatibilities of the business models are the causal reason for failure. Apparently, the existence of the incompatibilities and the resulting negative impacts makes it difficult to successfully implement such a strategy. To understand the rationale of the incumbent airlines, this paper first highlights the motives for setting up a parallel low-cost carrier: it seems useful to understand the economic logic for a company to condone the operation of several business models with the same basic output inside the organization boundary that appears to run counter to the traditional logic of efficiency. Secondly, the goal is to consider the incompatibilities in operating the business model of the no-frills low-cost carrier and full-service network carrier simultaneously. When talking about incompatibilities of the business models, reference is made to any inconsistencies or the missing fit of strategic positions from which conflicts or negative impacts arise, and where it becomes necessary to make trade-offs. Finally, a set of propositions is developed following contingency theory, in which the incompatibilities can be controlled in such a way that the overall benefits are higher than the costs. It is believed that incompatible positions and the resulting negative impacts arise automatically, when a company operates two business models simultaneously, which are turning out the same basic output. It is, however, assumed that the number and extent of the negative impacts can be reduced, depending presumably on organizational and market-driven conditions, thus on controllable and non-controllable contingencies.