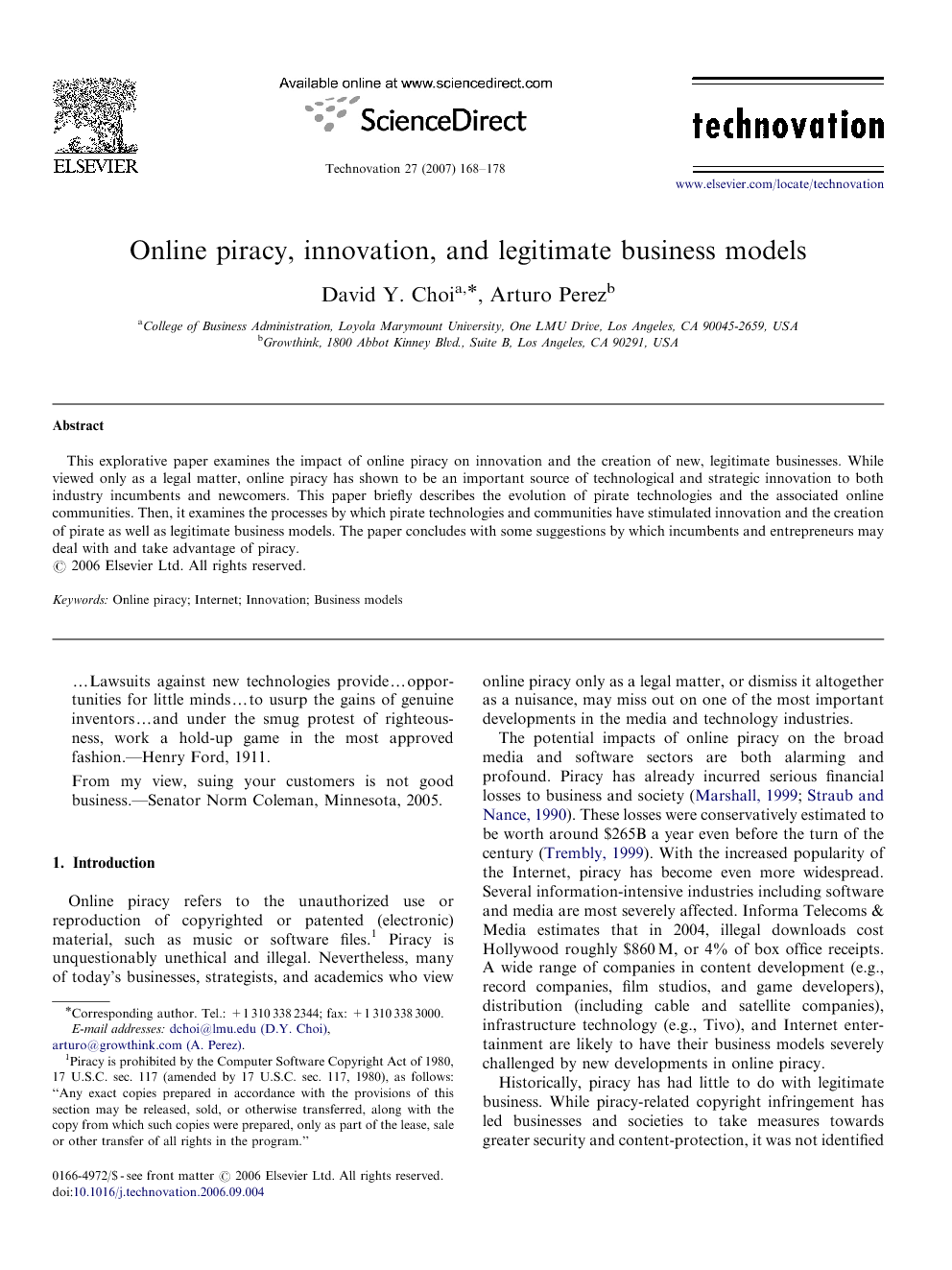 This explorative paper examines the impact of online piracy on innovation and the creation of new, legitimate businesses. While viewed only as a legal matter, online piracy has shown to be an important source of technological and strategic innovation to both industry incumbents and newcomers. This paper briefly describes the evolution of pirate technologies and the associated online communities. Then, it examines the processes by which pirate technologies and communities have stimulated innovation and the creation of pirate as well as legitimate business models. The paper concludes with some suggestions by which incumbents and entrepreneurs may deal with and take advantage of piracy.

Online piracy refers to the unauthorized use or reproduction of copyrighted or patented (electronic) material, such as music or software files.1 Piracy is unquestionably unethical and illegal. Nevertheless, many of today's businesses, strategists, and academics who view online piracy only as a legal matter, or dismiss it altogether as a nuisance, may miss out on one of the most important developments in the media and technology industries. The potential impacts of online piracy on the broad media and software sectors are both alarming and profound. Piracy has already incurred serious financial losses to business and society (Marshall, 1999; Straub and Nance, 1990). These losses were conservatively estimated to be worth around $265B a year even before the turn of the century (Trembly, 1999). With the increased popularity of the Internet, piracy has become even more widespread. Several information-intensive industries including software and media are most severely affected. Informa Telecoms & Media estimates that in 2004, illegal downloads cost Hollywood roughly $860 M, or 4% of box office receipts. A wide range of companies in content development (e.g., record companies, film studios, and game developers), distribution (including cable and satellite companies), infrastructure technology (e.g., Tivo), and Internet entertainment are likely to have their business models severely challenged by new developments in online piracy. Historically, piracy has had little to do with legitimate business. While piracy-related copyright infringement has led businesses and societies to take measures towards greater security and content-protection, it was not identified for its ability to spur legitimate businesses or economic value creation. In recent years, however, piracy has had a profound impact on innovation and the emergence of new business models that have alarmed industry incumbents. In general, the more successful the incumbents are, the more severe the damage piracy can have on their business. Our analysis of recent history of online piracy shows that it has affected innovation and legitimate business creation through a four-step process. First, online piracy has pioneered the use of new technologies. For example, it has made a significant impact in the evolution of file-transfer technology that has created breakthroughs in information distribution for both illegal and legal uses. Second, pirate communities have been a source of valuable market insight. As consumers of pirated music, game, or software files tend to be early adopters, they have served as a useful source of emerging market trends. By researching pirate communities, perceptive businesses and entrepreneurs have been successful in identifying needs that legacy businesses were not adequately addressing. Third, online pirates have contributed to new market creation. Often, communities that were once based on the illegal use of copyrighted materials have migrated to become customer bases of legitimate businesses. For example, many of the former Napster pirates have migrated to iTunes and the legal version of Napster as paying customers. Today's piracy communities—4 million strong—may become a legitimate consumer bloc as businesses catch up to meet their demands (Economist, 2005). Lastly, online piracy has directly and indirectly spurred the creation of legitimate and innovative business models. In some cases, these businesses were technology companies entering the converging market to take advantage of new opportunities. Other cases involved incumbents shrewdly (sometimes reluctantly) finding ways to adapt their business models to the new market environment. In all cases, successful business models took advantage of new technologies, market insights, and installed bases created by the pirate communities. This pattern of piracy pioneering new market insight, market communities, and business models appears to repeat with each generation of new pirate technology. We observe that companies who understand this pattern and take advantage of the innovation offered by piracy have created substantial economic value. This paper begins with a brief review of the literature. Then, it briefly explores the evolution of pirate technologies and their associated online communities, starting with the early days of the Internet through the recent Napster and BitTorrent phenomena. In particular, we analyze the influence of the recent peer-to-peer (P2P) technologies and communities on innovation and the creation of new business models in the media sector.

Online piracy has had and is likely to continue to have a large impact on the fast-changing media and software industries. Given the irrepressible growth of piracy communities, legal battles, while necessary, may be limited in their effectiveness. An alternative for both incumbents and entrepreneurs may be to view online piracy as a source of innovation that has been lacking in the traditional media sector. In fact, a review of Napster and BitTorrent phenomena shows that it has been instrumental for innovation and new business creation. We have observed that online piracy indeed can (1) pioneer the use of new technologies, (2) provide the business world with invaluable market insight, (3) contribute to new market creation, and often (4) spur the development of legitimate and innovative business models. Interestingly, we observe that the four-step process may hold with each generation of new technology. It is imperative for businesses to recognize this pattern and use it to their advantage when developing their future strategy. For the entrepreneurially minded companies or individuals, the changes brought by online piracy can present unique business opportunities when they are promptly and correctly identified. Based on the insights obtained from our research, we note a few important lessons that may be applicable to a wide range of companies in the media and software industries. Be knowledgeable: Companies and entrepreneurs should keep up with the newest developments in piracy technology and online communities. It is important to understand that the reason for their popularity is not just that their offerings are free. Many of the users spending hours of their time on websites with incomplete functionalities and unfriendly interfaces are willing to pay a small fee for a superior product. Innovative companies will find legitimate business models that capture new markets and are financially sound. Take large steps: An important take-away from the music industry should be that companies should not meet customer needs half way, as MusicNet or Pressplay did with their incomplete song selection, unfriendly pricing model, or complicated customer interface. Innovative businesses should identify what turns customers on and try to meet their needs (e.g., good selection, easy search, flexibility, ability to burn onto a CD or DVD, etc.) to the fullest extent as possible, as Apple has started to do with iTunes. Utilize pirate technologies: Media and software companies should consider utilizing emerging technologies like BitTorrent and its equivalent to their advantage, as some aforementioned software, game developers and media companies have already done. These technologies can minimize bandwidth costs and quickly distribute content. Modify business model: Incumbent media and software companies whose businesses are being severely challenged, must take necessary steps to reconfigure their business models as many companies have begun to do. Like BBC, companies should experiment with a couple of initiatives, learn and adapt accordingly. In today's fast moving market environment, there are advantages to being an early mover. Harbor communities: The Internet is uniting and segmenting people with similar interests more closely than ever before. These groups are developing organically. Companies should identify mutually beneficial relationships with such pirate communities, officially or otherwise. Companies can foster a creative environment in such communities based on the carefully observed tendencies of online pirate communities and provide a stimulating way for their users to participate in the creative process. Companies should also consider the BitTorrent communities for word of mouth or viral marketing as the Daily Show and Battlestar Galactica have successfully done.