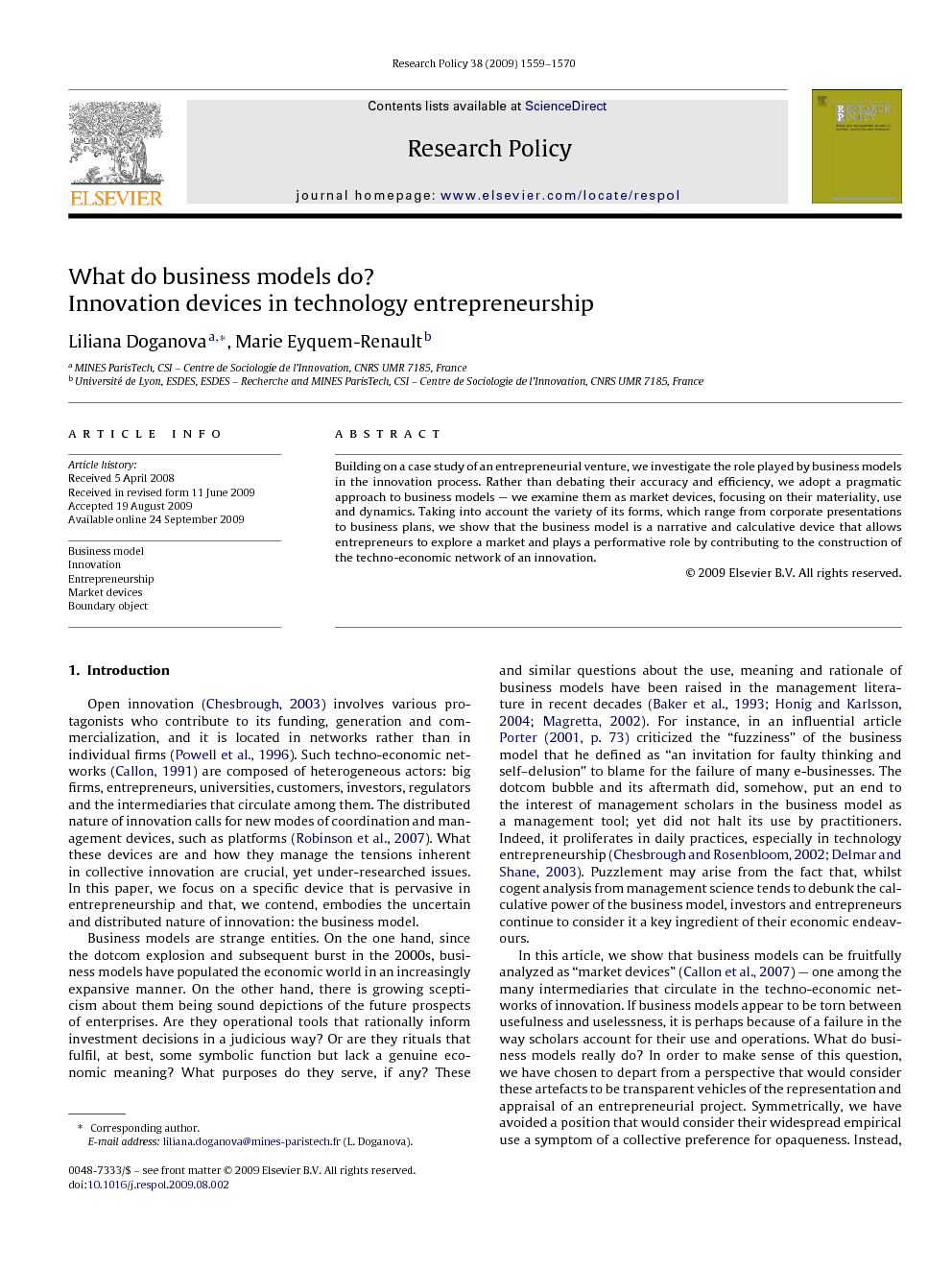 Building on a case study of an entrepreneurial venture, we investigate the role played by business models in the innovation process. Rather than debating their accuracy and efficiency, we adopt a pragmatic approach to business models — we examine them as market devices, focusing on their materiality, use and dynamics. Taking into account the variety of its forms, which range from corporate presentations to business plans, we show that the business model is a narrative and calculative device that allows entrepreneurs to explore a market and plays a performative role by contributing to the construction of the techno-economic network of an innovation.

Open innovation (Chesbrough, 2003) involves various protagonists who contribute to its funding, generation and commercialization, and it is located in networks rather than in individual firms (Powell et al., 1996). Such techno-economic networks (Callon, 1991) are composed of heterogeneous actors: big firms, entrepreneurs, universities, customers, investors, regulators and the intermediaries that circulate among them. The distributed nature of innovation calls for new modes of coordination and management devices, such as platforms (Robinson et al., 2007). What these devices are and how they manage the tensions inherent in collective innovation are crucial, yet under-researched issues. In this paper, we focus on a specific device that is pervasive in entrepreneurship and that, we contend, embodies the uncertain and distributed nature of innovation: the business model. Business models are strange entities. On the one hand, since the dotcom explosion and subsequent burst in the 2000s, business models have populated the economic world in an increasingly expansive manner. On the other hand, there is growing scepticism about them being sound depictions of the future prospects of enterprises. Are they operational tools that rationally inform investment decisions in a judicious way? Or are they rituals that fulfil, at best, some symbolic function but lack a genuine economic meaning? What purposes do they serve, if any? These and similar questions about the use, meaning and rationale of business models have been raised in the management literature in recent decades (Baker et al., 1993, Honig and Karlsson, 2004 and Magretta, 2002). For instance, in an influential article Porter (2001, p. 73) criticized the “fuzziness” of the business model that he defined as “an invitation for faulty thinking and self–delusion” to blame for the failure of many e-businesses. The dotcom bubble and its aftermath did, somehow, put an end to the interest of management scholars in the business model as a management tool; yet did not halt its use by practitioners. Indeed, it proliferates in daily practices, especially in technology entrepreneurship (Chesbrough and Rosenbloom, 2002 and Delmar and Shane, 2003). Puzzlement may arise from the fact that, whilst cogent analysis from management science tends to debunk the calculative power of the business model, investors and entrepreneurs continue to consider it a key ingredient of their economic endeavours. In this article, we show that business models can be fruitfully analyzed as “market devices” (Callon et al., 2007) — one among the many intermediaries that circulate in the techno-economic networks of innovation. If business models appear to be torn between usefulness and uselessness, it is perhaps because of a failure in the way scholars account for their use and operations. What do business models really do? In order to make sense of this question, we have chosen to depart from a perspective that would consider these artefacts to be transparent vehicles of the representation and appraisal of an entrepreneurial project. Symmetrically, we have avoided a position that would consider their widespread empirical use a symptom of a collective preference for opaqueness. Instead, we examine business models as intelligent collective devices in contexts of uncertainty. Our approach is pragmatic. It is opposed to an essentialist view, which considers the business model as a more or less faithful description of an objective reality beyond it, as well as to an instrumental analysis, which defines ex ante functions of the business model and measures its performance relative to them. Our main argument is that the business model works as both a calculative and a narrative device. It allows entrepreneurs to explore a market and to bring their innovation – a new product, a new venture and the network that supports it – into existence. The business model’s function cannot be limited to a reflexive exercise enhancing the rationality of the entrepreneur who is writing a PowerPoint presentation or a business plan. The narrative and the calculation that it performs are indeed addressed to third parties, such as customers or investors. Moving around various actors and coordinating their action, the business model appears to act as a boundary object (Star and Griesemer, 1989). We therefore consider the business model “in action” (Latour, 1987) and follow its trajectory. We argue that the flexible mix of narratives and calculations within the business model enables it to circulate across heterogeneous actors, which, in turn, endows it with a performative role: by circulating, it gradually builds the network of the new venture that it represents. In this paper, then, we investigate the role of business models through the case study of a new venture. Combining interviews with the analysis of internal and publicly available corporate documents and presentations, we identify the specificities of the business model as a market device that, as we argue, enable the management of the tensions inherent to the entrepreneurial process. The first section of this paper is devoted to a review of three different approaches to business models: the essentialist and the functionalist views that prevail in the extant literature, and the pragmatic stance that we propose here, building on the recent stream of research on market devices. After a presentation of our methodology, we study the case of a French entrepreneurial venture by analyzing different documents that describe its business model and by following their circulation in space and time. We show that the narrative and calculative techniques implemented in these documents enable the business model to act as a boundary object and to manage the tension between framing and overflowing (Callon, 1998a) inherent to the explorative nature of entrepreneurship. We then discuss the conditions of possibility and implications of business models acting as boundary objects. The paper closes with some reflexions on the performative roles of business models.