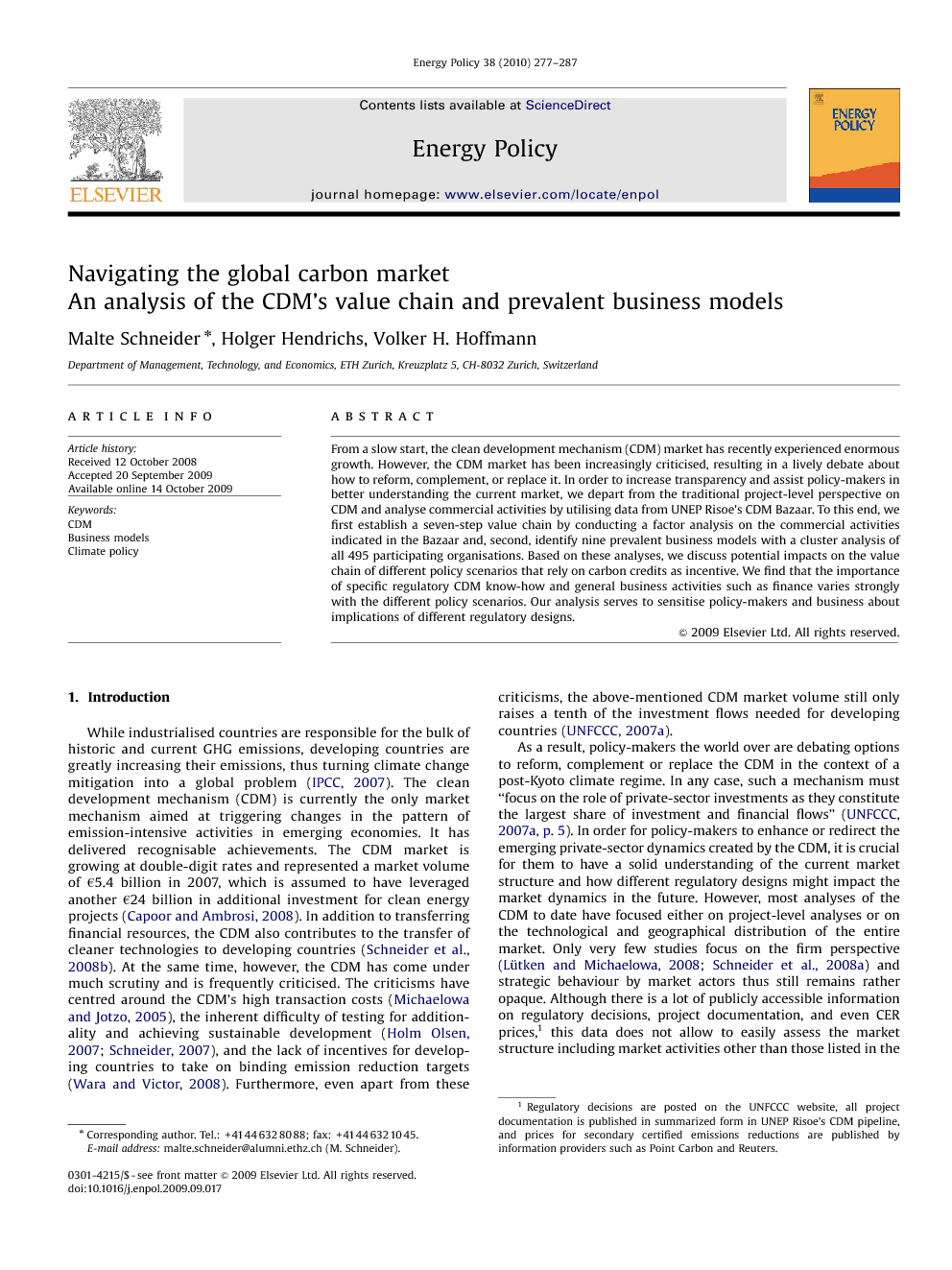 From a slow start, the clean development mechanism (CDM) market has recently experienced enormous growth. However, the CDM market has been increasingly criticised, resulting in a lively debate about how to reform, complement, or replace it. In order to increase transparency and assist policy-makers in better understanding the current market, we depart from the traditional project-level perspective on CDM and analyse commercial activities by utilising data from UNEP Risoe's CDM Bazaar. To this end, we first establish a seven-step value chain by conducting a factor analysis on the commercial activities indicated in the Bazaar and, second, identify nine prevalent business models with a cluster analysis of all 495 participating organisations. Based on these analyses, we discuss potential impacts on the value chain of different policy scenarios that rely on carbon credits as incentive. We find that the importance of specific regulatory CDM know-how and general business activities such as finance varies strongly with the different policy scenarios. Our analysis serves to sensitise policy-makers and business about implications of different regulatory designs.

While industrialised countries are responsible for the bulk of historic and current GHG emissions, developing countries are greatly increasing their emissions, thus turning climate change mitigation into a global problem (IPCC, 2007). The clean development mechanism (CDM) is currently the only market mechanism aimed at triggering changes in the pattern of emission-intensive activities in emerging economies. It has delivered recognisable achievements. The CDM market is growing at double-digit rates and represented a market volume of €5.4 billion in 2007, which is assumed to have leveraged another €24 billion in additional investment for clean energy projects (Capoor and Ambrosi, 2008). In addition to transferring financial resources, the CDM also contributes to the transfer of cleaner technologies to developing countries (Schneider et al., 2008b). At the same time, however, the CDM has come under much scrutiny and is frequently criticised. The criticisms have centred around the CDM's high transaction costs (Michaelowa and Jotzo, 2005), the inherent difficulty of testing for additionality and achieving sustainable development (Holm Olsen, 2007; Schneider, 2007), and the lack of incentives for developing countries to take on binding emission reduction targets (Wara and Victor, 2008). Furthermore, even apart from these criticisms, the above-mentioned CDM market volume still only raises a tenth of the investment flows needed for developing countries (UNFCCC, 2007a). As a result, policy-makers the world over are debating options to reform, complement or replace the CDM in the context of a post-Kyoto climate regime. In any case, such a mechanism must “focus on the role of private-sector investments as they constitute the largest share of investment and financial flows” (UNFCCC, 2007a, p. 5). In order for policy-makers to enhance or redirect the emerging private-sector dynamics created by the CDM, it is crucial for them to have a solid understanding of the current market structure and how different regulatory designs might impact the market dynamics in the future. However, most analyses of the CDM to date have focused either on project-level analyses or on the technological and geographical distribution of the entire market. Only very few studies focus on the firm perspective (Lütken and Michaelowa, 2008; Schneider et al., 2008a) and strategic behaviour by market actors thus still remains rather opaque. Although there is a lot of publicly accessible information on regulatory decisions, project documentation, and even CER prices,1 this data does not allow to easily assess the market structure including market activities other than those listed in the PDDs. While such analyses are mostly offered as proprietary services by specialized firms, there are few analyses available in the public domain.2 Therefore, our aim is to increase the market's transparency by analysing two research questions that correspond to two important dimensions of the market. First, we investigate which activities constitute a holistic value chain of the CDM market, i.e., we also include activities that go beyond the requirements of the regulatory process. Second, we examine which types of actors cover which value chain steps in order to shed light on prevalent business models. These analyses form the basis for sensitising both policy-makers and the private sector to possible effects of different post-Kyoto scenarios on the dynamics of the private sector's engagement in mitigation efforts in developing countries. The paper begins with a short review of the CDM and related corporate activities (Section 2), and a presentation of our data and methodology (Section 3). Next, 4 and 5 present results on the value chain and prevalent business models. Finally, Section 6 discusses the possible impacts of different post-Kyoto regimes on the value chain and resulting market dynamics.