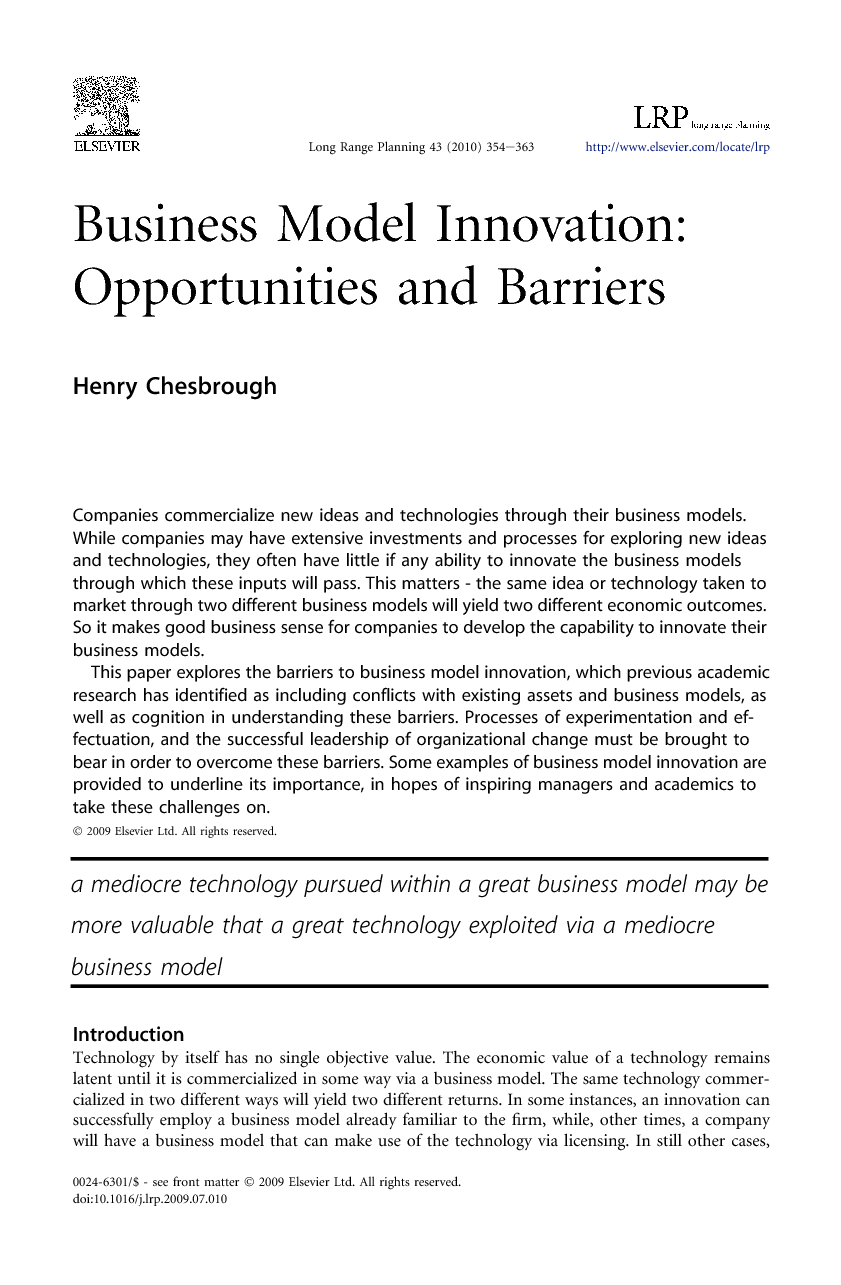 Companies commercialize new ideas and technologies through their business models. While companies may have extensive investments and processes for exploring new ideas and technologies, they often have little if any ability to innovate the business models through which these inputs will pass. This matters - the same idea or technology taken to market through two different business models will yield two different economic outcomes. So it makes good business sense for companies to develop the capability to innovate their business models. This paper explores the barriers to business model innovation, which previous academic research has identified as including conflicts with existing assets and business models, as well as cognition in understanding these barriers. Processes of experimentation and effectuation, and the successful leadership of organizational change must be brought to bear in order to overcome these barriers. Some examples of business model innovation are provided to underline its importance, in hopes of inspiring managers and academics to take these challenges on.

In sum, business model innovation is vitally important, and yet very difficult to achieve. The barriers to changing the business model are real, and tools such as maps are helpful, but not enough. Organizational processes must also change (and these are not mapped by those tools). Companies must adopt an effectual attitude toward business model experimentation. Some experiments will fail, but so long as failure informs new approaches and understanding within the constraints of affordable loss, this is to be expected - even encouraged. With discovery driven planning, companies can model the uncertainties, and update their financial projections as their experiments create new data. Effectuation creates actions based on the initial results of experiments, generating new data which may point towards previously latent opportunity. And organizations will need to identify internal leaders for business model change, in order to manage the results of these processes and deliver a new, better business model for the company. The discretion and judgment of middle managers must be subjected to empirical data if local objectives are to be subordinated to those of the overall organization. At the same time, the organization's culture must find ways to embrace the new model, while maintaining the effectiveness of the current business model until the new one is ready to take over completely. Only in this way can business model innovation help companies escape the ‘trap’ of their earlier business models, and renew growth and profits. business model innovation is vital, yet very difficult …. the barriers to change are real. [Model] experiments will fail, but [if] they inform new approaches and understanding, this is to be expected - even encouraged.