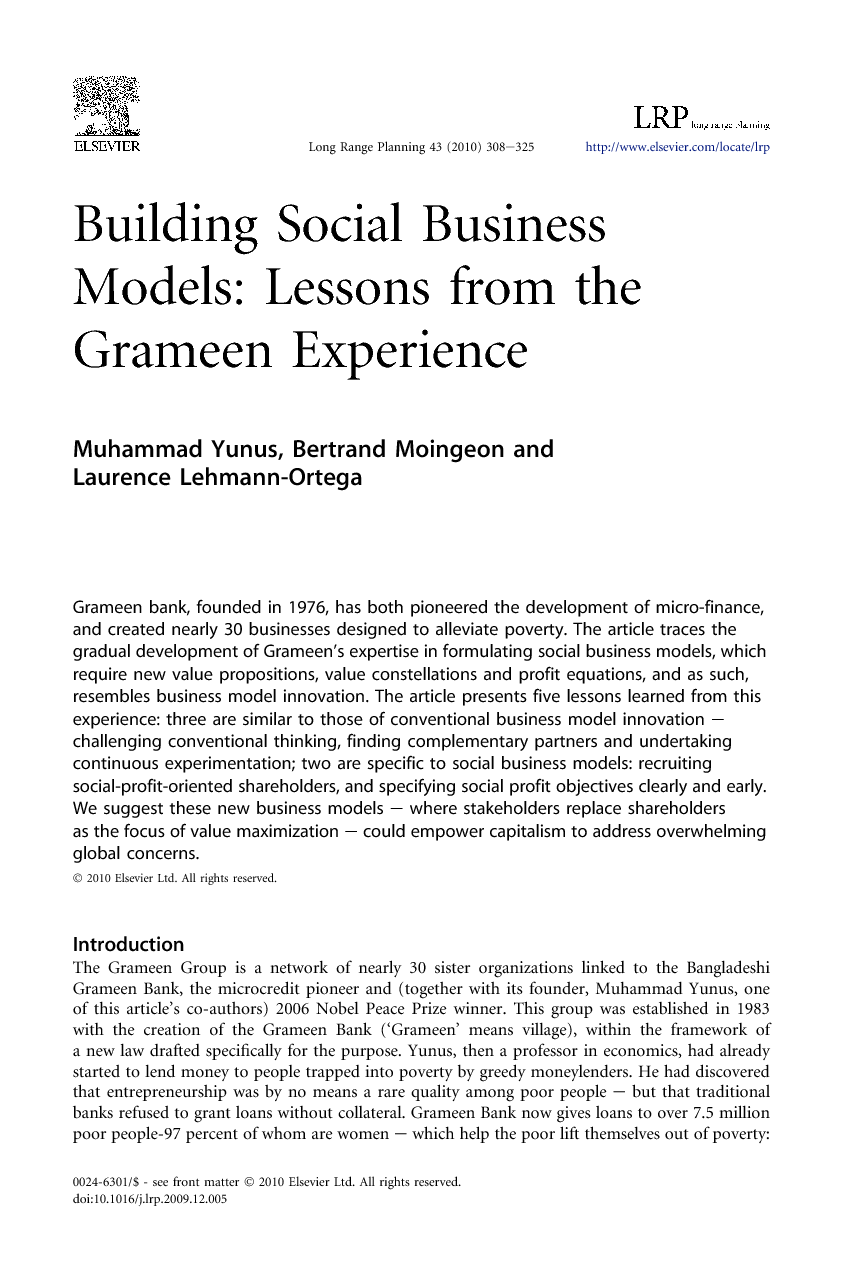 The Grameen Group is a network of nearly 30 sister organizations linked to the Bangladeshi Grameen Bank, the microcredit pioneer and (together with its founder, Muhammad Yunus, one of this article's co-authors) 2006 Nobel Peace Prize winner. This group was established in 1983 with the creation of the Grameen Bank (‘Grameen’ means village), within the framework of a new law drafted specifically for the purpose. Yunus, then a professor in economics, had already started to lend money to people trapped into poverty by greedy moneylenders. He had discovered that entrepreneurship was by no means a rare quality among poor people – but that traditional banks refused to grant loans without collateral. Grameen Bank now gives loans to over 7.5 million poor people-97 percent of whom are women – which help the poor lift themselves out of poverty: 68 percent of the families of Grameen Bank borrowers have crossed the poverty line. Motivation towards repayment is high, with rates currently running at 98.4 percent, and the bank has been profitable in every year of its existence except 1983, 1991 and 1992. The socially-oriented organizations in the Grameen Group now range from the country's largest phone company to one supplying affordable healthcare. The Group's on-going experience (over almost 30 years) of building firms whose purpose is to alleviate poverty has led to the emergence of the concept of ‘social business’, which can be viewed as still being under construction. Established multinational companies (MNC) have recently shown some interest in the Grameen experience and in its fight against poverty as part of a more general emphasis on corporate social responsibility (CSR). However shareholder value maximization remains the rule in the capitalist system, and – clearly – the reconciliation of this with social objectives is often problematic. Thus, although advocates of CSR like to propose that companies should be measured by a ‘triple bottom line’ of financial, social and environmental benefits, ultimately only one bottom line usually matters: financial profit. reconciling shareholder value maximization with social objectives is clearly problematic … despite CSR advocates proposing a ‘triple bottom line’, only one ultimately matters in the capitalist system However, research has shown that, if managed strategically, CSR projects can indeed pay off, both socially and financially.1 In the midst of the current financial and economic crisis, some companies have begun to question their role more fundamentally and seem to be awakening to social change issues. Some pioneering established companies have sought to implement more pro-active CSR policies that anticipate social trends and go beyond the minimum required,2 and this impetus has led to the rise of the number of ‘social businesses’. Many of these have turned to Grameen to benefit from its experience to help them achieve these goals, and partnered with it in a range of social business ventures. We report on three of these as our case studies: • Grameen Phone, a partnership with Telenor (the Norwegian telecommunications company), has become one of the largest tax payers in Bangladesh. The success is based on the Grameen ‘telephone ladies’, who provide a phone service in their villages by lending users a phone for just a couple of minutes – avoiding them having to make costly handset purchases; • Grameen Veolia is a co-creation with Veolia Water (one of the world's leading water service providers) designed to use simplified surface-water treatment systems to provide rural populations with affordable access to drinking water, distributed at village drinking fountains or via cans, using prepaid card systems; • Grameen Danone is a collaboration with Danone (one of the world's leading healthy food companies) that offers an affordable and easily available dairy product developed to fulfill the nutritional needs of Bangladeshi children. The yoghurt is produced locally and distributed door-to-door by Grameen ladies. The story behind each of these ventures is of the gradual emergence of the social business concept: a self-sustaining company that sells goods or services and repays its owners' investments, but whose primary purpose is to serve society and improve the lot of the poor. Building on these recent Grameen experiments, our goal in this article is to delineate the lessons learned so as to provide detailed guidance for companies wishing to create social businesses. We analyze these cases (which are described in more detail in the Appendix) not in chronological order, but in the sequence that fits our main purpose – of studying the building of social business models. As the social business idea borrows some concepts from the capitalist economy, social business implementation can likewise borrow conventional business literature concepts. Our idea is to investigate whether the business model concept – and in particular the business model innovation literature – can help us propose a framework for setting up social businesses. The research into business model innovation, which considers business models as the locus of innovation (rather than products, processes or technologies), while it doesn't always use the same terminology, has led to a growing body of academic literature over recent years.3 This literature suggests that business model innovation is facilitated by three major strategic moves: challenging conventional wisdom; setting up appropriate partnerships; and undertaking experimentation. We reviewed these recommendations with the Grameen experience (see Appendix 2 for the research method), and found that they were also relevant for creating social business models. However, the case studies show that building social businesses also involves two additional requirements: the needs to involve socially-oriented shareholders and to state the intended social profit explicitly. Hence, overall, five lessons can be learned from the Grameen experience. The structure of this article follows our research path. First, we present the social business model concept, and highlight how building social businesses resembles business model innovation. We then describe the five lessons learned through the Grameen experience noted above. This leads us to develop a specific social business model framework conceived to help managers seeking to set up businesses conceived to fulfill a social goal.

By comparing the business model innovation literature and the Grameen experience, we have shown five lessons that can be learned about building social business models. We have also designed a social business model framework and demonstrated its value to our understanding of social businesses. We believe these findings not only concern MNC's wishing to engage in pro-active CSR policies, but can also be generalized to all entrepreneurs seeking to create social businesses. We consider this article as a first step in shaping the concept of the social business model, and further field experiment and research are needed for researchers and practitioners to study and develop this self-sustaining type of business. Indeed, many questions remain unsolved. For instance, how should the performance of social businesses be assessed? While return on capital employed is an accepted measure for conventional business models, social profit is difficult to measure with such standard ratios. Relevant indicators will probably suffer from greater time lags than those used in financial performance management: the impact of Shoktidoi yoghurt on children's health, for instance, will not become measurable for a couple of years. Certification procedures, such as the one developed by the Global Reporting Initiative, might be helpful, but are still under construction. However, we believe strongly there will be a growing interest in building social business models for three main reasons. First, humans have an instinctive, natural desire to make life better for their fellows if they can. Given the chance, people would rather live in a world without poverty, disease, ignorance and needless suffering. These are the causes that lead people to donate billions of dollars to charity every year, to launch NGOs and non-profit organizations, to volunteer countless hours to community service, and (in some cases) to devote their careers to relatively low-paid work in the social sector. The same drivers will lead many to create social businesses, once this new path is widely recognized and understood. Second, unlike conventional businesses, social businesses are not engaged in a contest. Their objectives are social, so they can learn from one another and best practices should spread rapidly. The effort involved in creating and refining social business models is, in a sense, a ‘donation’: they are unlikely to be seen as intellectual property in any sense, and so can be easily copied and rolled out by other global partners – and may even merge to become a stronger social force in the world. Last but not least, there is another set of reasons why these cases studies should encourage businesses to engage in this type of initiative. We believe, although small, these new ventures can play prominent roles within MNCs. While disagreement remains as to their effects on firm performance, several studies have found a positive relationship between CSR and firm reputation,21 while research has also consistently demonstrated the advantageous effect of CSR initiatives on current and prospective employees.22 Building social businesses could be seen as a ‘learning lab’, offering an arena where managers can challenge their conventional wisdom and develop dynamic capabilities that could in turn be helpful to an MNC's main business. All these arguments speak in favor of the development of social business initiatives within established companies, and suggest there should be a proliferation of social businesses through new or duplicated business models. Research on this topic needs to go on – not only does it enhance our understanding of pro-active CSR policies, but it also challenges our conventional approach to business thinking. Indeed, introducing it into the capitalist system may save the system altogether, by empowering it to address the overwhelming global concerns that currently remain outside mainstream business thinking. In addition, as we highlight in this article, building social businesses requires taking all stakeholders into account, a lesson that might also be usefully transferred to MNCs' conventional businesses, so as to contribute to a ‘post-crisis system’ where stakeholder value maximization replaces shareholder value maximization. Taken altogether, research on social business could be a factor in changing the capitalist system, by helping both academics and practitioners to challenge the current dominant shareholder paradigm. The findings in this article have emerged from the field, and in the specific context of shaping current experiments at Grameen. So far, our findings cannot be generalized to theory: further empirical inquiries need to be made into more social businesses, within and beyond the Grameen Group. However, we hope our lessons and framework will become a vehicle for examining new cases, so as to ultimately become a definite contribution to theory. people would rather live in a world without poverty, disease and needless suffering. Social businesses do not engage in contest … [and] could be a learning lab where managers challenge conventional wisdom and develop dynamic capabilities. [They] may become a stronger social force in the world … [leading] to a ‘post-crisis system’ where stakeholder value replaces the shareholder paradigm.