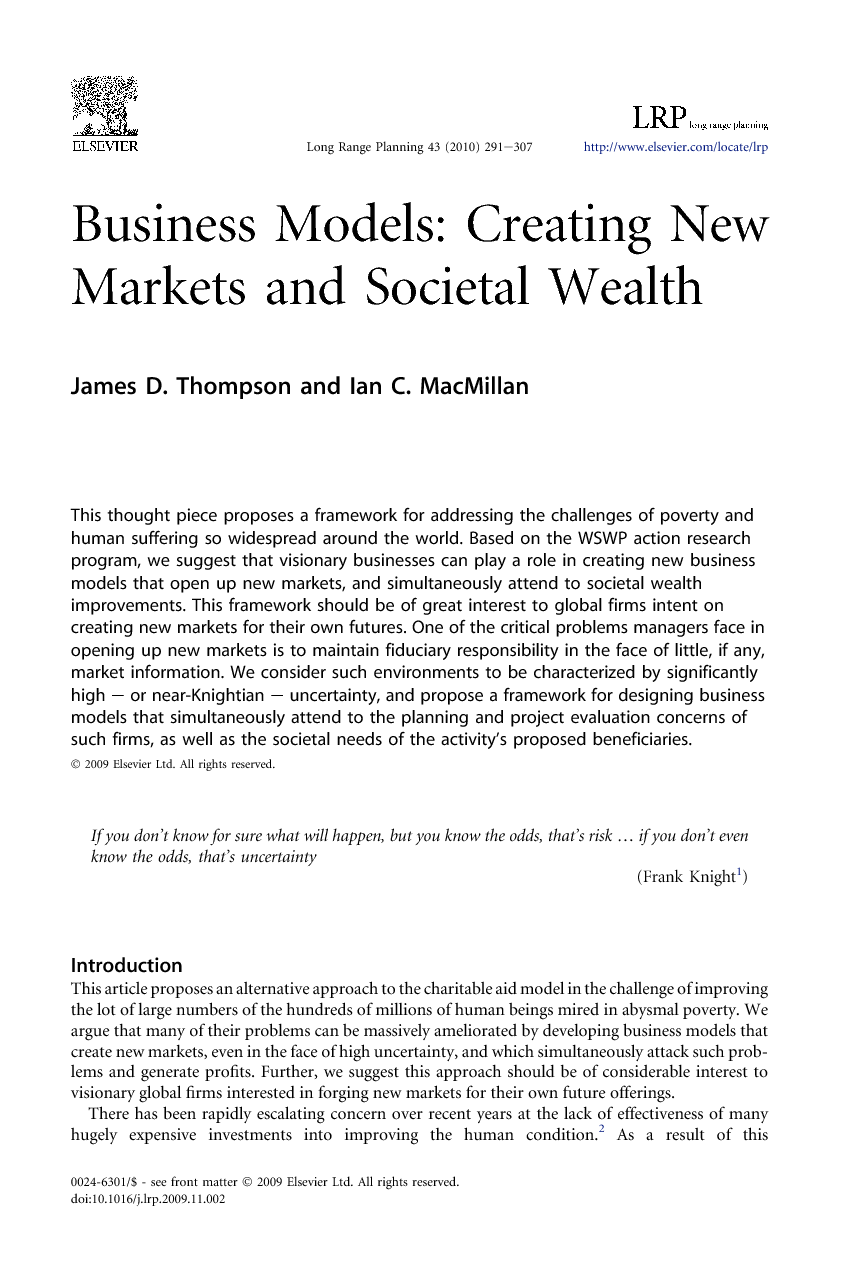 This thought piece proposes a framework for addressing the challenges of poverty and human suffering so widespread around the world. Based on the WSWP action research program, we suggest that visionary businesses can play a role in creating new business models that open up new markets, and simultaneously attend to societal wealth improvements. This framework should be of great interest to global firms intent on creating new markets for their own futures. One of the critical problems managers face in opening up new markets is to maintain fiduciary responsibility in the face of little, if any, market information. We consider such environments to be characterized by significantly high – or near-Knightian – uncertainty, and propose a framework for designing business models that simultaneously attend to the planning and project evaluation concerns of such firms, as well as the societal needs of the activity's proposed beneficiaries.

This article proposes an alternative approach to the charitable aid model in the challenge of improving the lot of large numbers of the hundreds of millions of human beings mired in abysmal poverty. We argue that many of their problems can be massively ameliorated by developing business models that create new markets, even in the face of high uncertainty, and which simultaneously attack such problems and generate profits. Further, we suggest this approach should be of considerable interest to visionary global firms interested in forging new markets for their own future offerings. There has been rapidly escalating concern over recent years at the lack of effectiveness of many hugely expensive investments into improving the human condition.2 As a result of this disappointment with traditional development approaches, we are witnessing an outpouring of revenue seeking alternatives to traditional economic development models, with the pursuit of social upliftment via revenue- and profit-seeking manifested in activities such as social investment funds, microfinance activities such as those of the Grameen Bank in Bangladesh (reported by Yunus et al. elsewhere in this issue3), and the corporate social responsibility programs of many multi-national corporations.4 The alleviation of human suffering through creation of wealth generating enterprises has become a focus for business, NGOs and not-for-profits alike. Organizations from the Gates foundation to local universities have, and continue to, invest in so-called ‘social enterprise’ programs whose goals are to both solve big societal problems and to demonstrate revenue sustainability, if not generate profits. So we are seeing the emergence of new types of business enterprises that could well grow into an entire new global economic sector, predicated on poverty reduction via the creation of business models that pursue both profits and societal wealth simultaneously.5 This sector should be of deep interest to large, traditionally profit-focused firms, which may be able to create and grow huge new markets (and subsequent new profit streams) for their offerings.6 If successful, the outcomes of such intra/entrepreneurial efforts could create a ‘virtuous cycle’: the greater the profits made, the greater the incentive for the business creator to grow the business; and the more societal problems are alleviated, the greater numbers of beneficiaries can join the mainstream of global consumers. We could well be seeing [the growth of] an entire new global economic sector, predicated on poverty reduction via the creation of business models that pursue both profits and societal wealth simultaneously. But the key phrase here is ‘If successful’... Many of the societal problems referred to above are currently highly intractable - as the iconic economist might put it: ‘If the problem were tractable, some profit-seeking enterprise would already be making profits resolving it!’ The general condition that leads to some of the most distressing states of poverty is that of market failure: despite enormous demand for desperately needed products and services in many cases markets simply do not exist – so new ones must be created. Moreover, despite the increasing popularity of (and the vast amounts of money spent on) the social enterprise construct, little theory and less empirical evidence has focused on understanding the conditions under which organizations trying to fulfill what are often competing objectives can operate, let alone prosper. Nor is there much said about generating markets that are new to the world – in other words creating markets, as opposed to just entering them – or what might guide managers in the development of viable business models in such entirely new market spaces. A recent addition to the literature by Santos and Eisenhardt explores ‘power as the underlying boundary logic … by which entrepreneurs compete in highly ambiguous markets’. Their paper is characteristic of organization theory in its concern with organizational boundaries, power distribution and human action.7 In contrast, our article has a strategic focus and is concerned with organizational outputs, inputs and cause-effect relations – it is a ‘thought piece’ that considers the challenges in building business models under conditions of high uncertainty. We discuss the preliminary business model development process used in the Wharton Societal Wealth Program (WSWP) that has evolved to create markets in emerging economies, and describes our ‘principles-in-the-making’ for creating new business models in emerging market environments that both enhance societal wealth and make private sector profits. We take the theoretical perspective that these ventures are operating in ‘near-Knightian’ conditions (which we define below), and present the conclusions we have drawn from the ten WSWP field research projects created with the dual missions of ‘doing societal good while doing well’, reporting mini case examples of four of these enterprises. The cumulative experience from these projects has led us to believe that we are in a position to share the set of principles we currently use, in the hope that they can help other managers and entrepreneurs engaged in similar market creation activities, and create a dialogue with such managers as they elaborate on their experiences. We use the term ‘prenormative’ to signal that these are ‘principles-in-the-making’, rather than hard prescriptions that follow decades of effort under manifold circumstances.

This thought piece has laid out our set of currently used principles, derived from our manifold experiences in the Wharton Societal Wealth Program, when designing and executing business models for enterprise creation under conditions of high uncertainty. Such environments score high on the ‘Knightian scale’ – i.e., they possess one or more of the following: highly imperfect markets, virtual absence of formal governance, massive deficiency or unreliability of infrastructure, profound unfamiliarity of technology, extreme unpredictability of competitive response, and/or deep ambiguity of objectives and desired outcomes. Discussions with practitioners in the field suggest that our principles could usefully apply in many other high-uncertainty situations. We find that this process allows us, and the managers of WSWP project ventures, to probe for opportunities by ‘unfolding’ entirely new business models and, in so doing, creating new markets. We stress that the principles we derived from this research are both preliminary and far from comprehensive – they are offered as a starting point for discussion and debate, rather than a prescription. Our hope is that they will prove useful for other situations where managers are trying to forge business models under high uncertainty, such as the commercialization of very new technologies or entrance into radically new markets.22 Our research is novel in that it has been conducted primarily in emergent markets, although we find the process to be effective in both developed and emergent economies. It makes two contributions: first we are building a research base in societal entrepreneurship, an area of growing academic interest; second we propose a general framework for practitioners wrestling with the challenges of new market creation, particularly in lesser developed environments. There are of course limitations to such field research: a severe drawback is that it takes considerable time, effort and expense to build a relatively small sample of firms to study. Even with the manifold efforts of others attempting similar research, it will likely be a number of years before sufficient performance data are available to yield a robust, quantitatively attractive population of both successful and unsuccessful SWE's from which to offer generalized insights and guidelines for business models focused on new market creation. How to trade off manifold objectives may be a future business model problem for even the most capitalistic firms facing high uncertainty, [given] recent profit seeking excesses and global financial turmoil. A recurring complication in handling the high-uncertainty conditions in our projects was deciding how to allocate extremely limited resources in simultaneous pursuit of the multiple – often competing – objectives of societal wealth creation and profit generation. This particular source of uncertainty – how to trade off manifold objectives – is likely to emerge as a business model problem in the near future for even the most capitalistic firms, as global organizations experience the retributional wake against the profit seeking excesses that contributed to the recent global financial turmoil. Firms may find that the single-minded pursuit of profits will be increasingly constrained by societal controls and sanctions, and that they will more and more often be expected to deliver improved performance, but under socially responsible constraints. Together with the further development of our emerging set of principles, this challenge may present interested researchers with attractive directions for follow-on research.