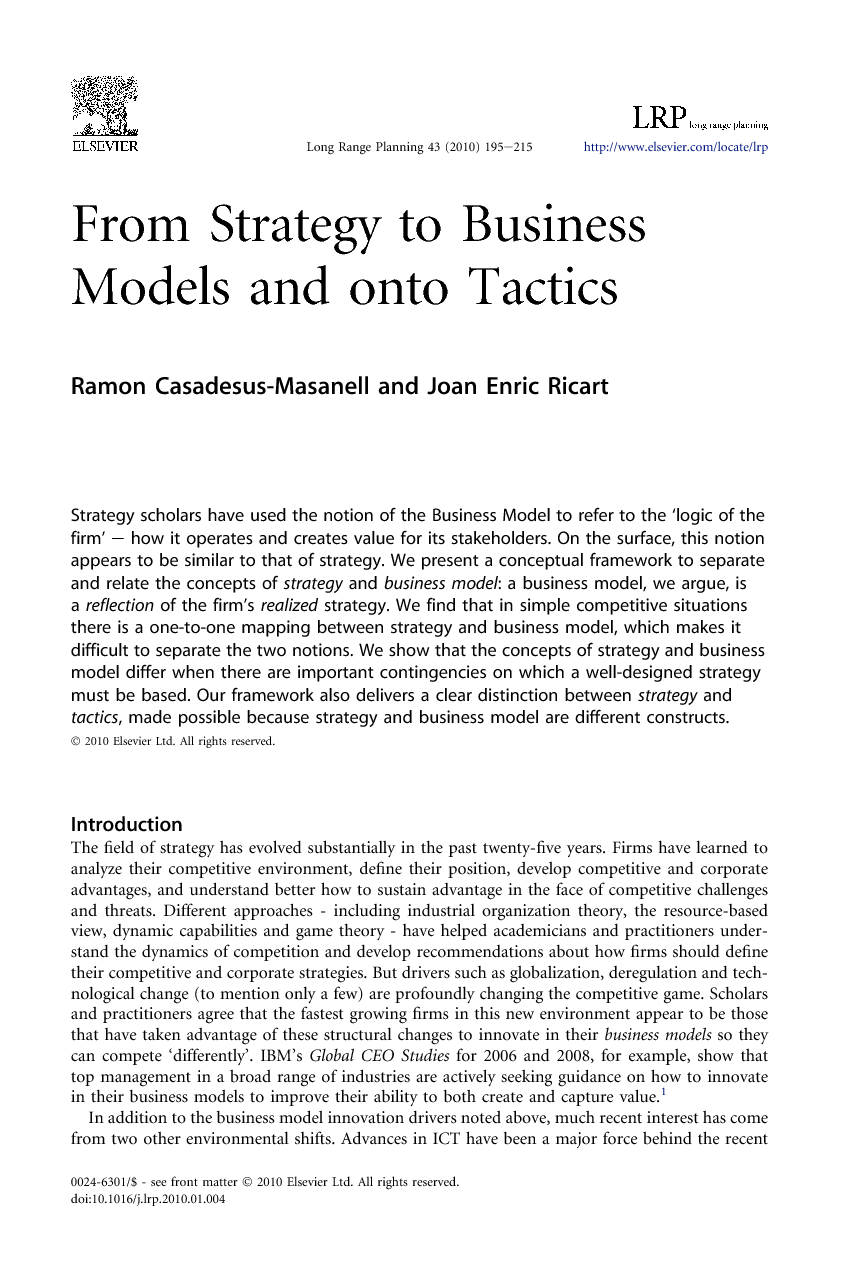 The field of strategy has evolved substantially in the past twenty-five years. Firms have learned to analyze their competitive environment, define their position, develop competitive and corporate advantages, and understand better how to sustain advantage in the face of competitive challenges and threats. Different approaches - including industrial organization theory, the resource-based view, dynamic capabilities and game theory - have helped academicians and practitioners understand the dynamics of competition and develop recommendations about how firms should define their competitive and corporate strategies. But drivers such as globalization, deregulation and technological change (to mention only a few) are profoundly changing the competitive game. Scholars and practitioners agree that the fastest growing firms in this new environment appear to be those that have taken advantage of these structural changes to innovate in their business models so they can compete ‘differently’. IBM's Global CEO Studies for 2006 and 2008, for example, show that top management in a broad range of industries are actively seeking guidance on how to innovate in their business models to improve their ability to both create and capture value.1 In addition to the business model innovation drivers noted above, much recent interest has come from two other environmental shifts. Advances in ICT have been a major force behind the recent interest in business model innovation. Many e-businesses are based on new business models – Shafer, Smith and Linder find that eight of the twelve recent business model definitions they present relate to e-business.2 New strategies for the ‘bottom of the pyramid’ in emerging markets have also steered researchers and practitioners towards the systematic study of business models. Academicians working in this area agree that firms need to develop novel business models to be effective in such specific and challenging environments (see work by Thompson and MacMillan, as well as by Yunus et al. in this issue), and socially motivated enterprises constitute a second important source of recent business model innovations.3 Advances in ICT and the demands of socially motivated enterprises constitute important sources of recent business model innovations. While it has become uncontroversial to argue that managers must have a good understanding of how business models work if their organizations are to thrive, the academic community has only offered early insights on the issue to date, and there is (as yet) no agreement as to the distinctive features of superior business models. We believe this is partly because of a lack of a clear distinction between the notions of strategy, business models and tactics, and the purpose of this article is to contribute to this literature by presenting an integrative framework to distinguish and relate these three concepts. Put succinctly: • Business Model refers to the logic of the firm, the way it operates and how it creates value for its stakeholders; and • Strategy refers to the choice of business model through which the firm will compete in the marketplace; while • Tactics refers to the residual choices open to a firm by virtue of the business model it chooses to employ. To integrate these three concepts, we introduce a generic two-stage competitive process framework, as depicted in Figure 1. In the first stage, firms choose a ‘logic of value creation and value capture’ (i.e., choose their business model), and in the second, make tactical choices guided by their goals (which, in most cases, entail some form of stakeholder value maximization). Figure 1 thus presents our organizing framework: the object of strategy is the choice of business model, and the business model employed determines the tactics available to the firm to compete against, or cooperate with, other firms in the marketplace. The article is organized as follows. In the next section we define and discuss the notion of business models and present a tool to represent them, while the following section considers the stage two ‘choice’ in our framework, presenting and discussing the notion of tactics in relation to that of business model. The following section then moves back to examine the first – strategy – stage, after which we revisit our process framework to integrate the three notions. We discuss the connection between strategy and business model, arguing that both notions can be clearly separated. A detailed example is developed in the following stage, followed by some concluding remarks.

We have presented a framework that allows a simple integration of the notions of strategy, business model and tactics. In our formulation, strategy and business model, though related, are different concepts: a business model is the direct result of strategy but is not, itself, strategy. Our framework also distinguishes between tactics and strategy, a separation that is possible because strategy and business model are different constructs. Tactical interaction (where organizations affect each other when acting within the bounds set by their business models) has well-defined rules of play (action sets are well-understood: the mapping from actions to payoffs are easy to discern, and best responses can be easily figured out) because business models constrain the tactical sets and game theory can easily be applied to predict competitive dynamics and outcomes. Strategic interaction (organizations affecting each other through strategy - that is, by changing their business models) is more complex. First, the rules of the game in this case are not well-defined, as there are few constraints as to how business models can be assembled. Second, the mapping between strategic choices and payoffs is much more complicated than in the case of tactics because, for every business model modification, the designer needs to assess the effects that it will have on tactics (as the final payoffs are always determined as the outcome of tactical interactions). Finally, it is usually hard to predict how a rival will react to a particular set of strategic moves as, for all practical purposes, business model best-responses become impossible to pin down. The proliferation of managerial books on strategy innovation is related to the difficulty in deriving best responses for strategy. Much of the recent managerial literature on innovation is concerned with altering business models. Yip claims that strategy practice can be enlightened by understanding business models, while other recent authors - such as McGrath (another contributor to this issue) and MacMillan or Govindojaran and Trimble - have developed techniques to help companies come up with such strategies. Even operations management scholars (such as Lee) have pointed out that radical changes in some parts of a firm's business model can have tremendous performance implications.27 designing new business models is closer to an art than a science. [Understanding] how strategy, business models and tactics interconnect and affect each other can help guide the search for novel, interesting and profitable new ways to compete. We conclude that the exercise of designing new business models is closer to an art than to a science. From an academic point of view, we believe that having clear definitions of the constructs that we employ and analyze is a necessary condition for progress in the field. From the practitioners' perspective, it is our hope that having an integrative framework that cleanly separates the realms of strategy, business models and tactics – and illustrates how they interconnect and affect each other - can help guide the search for novel, interesting and profitable new ways to compete.