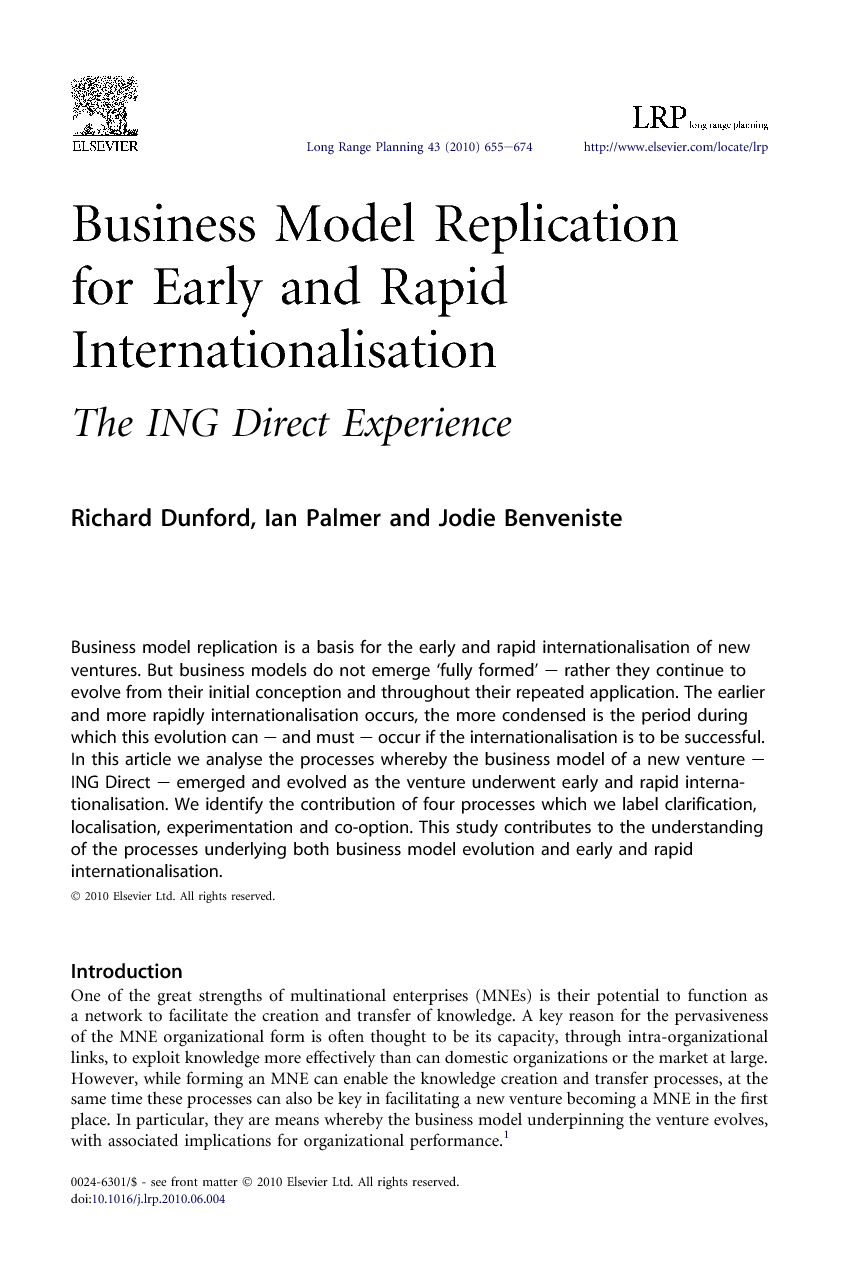 One of the great strengths of multinational enterprises (MNEs) is their potential to function as a network to facilitate the creation and transfer of knowledge. A key reason for the pervasiveness of the MNE organizational form is often thought to be its capacity, through intra-organizational links, to exploit knowledge more effectively than can domestic organizations or the market at large. However, while forming an MNE can enable the knowledge creation and transfer processes, at the same time these processes can also be key in facilitating a new venture becoming a MNE in the first place. In particular, they are means whereby the business model underpinning the venture evolves, with associated implications for organizational performance.1 Where a new venture intends to internationalise both early in its existence and rapidly – the phenomenon of ‘accelerated internationalisation’ – there is likely to be a still greater dependence on effective knowledge creation and transfer. Even where internationalisation is based on a replication strategy, a new venture’s business model is unlikely to have emerged fully formed, and knowledge creation and knowledge transfer will impact both its early fine-tuning and its continuing evolution. Despite the significance of knowledge creation and transfer for the growth of new ventures into MNEs, this aspect has received relatively little attention in the literature, as research on MNEs has tended to focus on their functioning as already established entities rather than on the processes whereby emerging ventures become global players. Similarly, the business model literature has tended to emphasise either the innovative capacity of new business models or the need for them to change over time to meet changing competitive conditions, but far less attention has been given to the specific detail of processes whereby new business models are ‘discovered, adjusted and fine tuned by doing’.2 To address this imbalance, we have researched the processes through which business model replication can provide a basis for the early and rapid internationalisation of a new venture. In particular, we illustrate the role of four processes – which we characterise as clarification, localization, experimentation and co-option – in determining how a business model takes its initial form and subsequently, continues to evolve. Our research was case-based, involving a longitudinal study of ING Direct’s emergence as a global retail bank. This company constitutes a particularly appropriate research site for four mutually reinforcing reasons which, taken together, made the development and international expansion of ING Direct a rewarding case for research study. • First, it internationalised early and rapidly: within five years of the results of the initial trial of its business model (1997–8), ING Direct had entered eight other countries. • Second, ING Direct’s international expansion was through business model replication, and since it occurred in multiple countries over a concentrated time period, it serves as an example of a natural experiment into the processes associated with the emergence and evolution of a replicated business model. • Third, various measures indicate that ING Direct’s accelerated international expansion was successful. Within six years of the initial business model trial it was the largest direct bank (as measured by client funds entrusted) in every country where it operated (see Table 1). Despite still incurring the costs involved in entering further new markets, it became profitable by the final quarter of 2002, and 2003 provided its first full year of profit (see Table 2). Although ING was not a well-known entity in most countries at the time of entry, brand awareness of ING Direct averaged 83% across these markets by 2007. No other direct bank has had a comparable record of success on a global scale to date.3 Fourth, we were permitted access to a range of informants that was exceptional in terms of both their seniority and geographic spread, gaining approval for interviews with the CEOs and other senior executives both at Global Head Office and in each operational country. This breadth of access to the most senior strategic decision-makers involved in the design and implementation of ING Direct’s business model offered us the possibility of exceptional data quality. This article is structured as follows. First, we identify key elements of the existing literatures on early and rapid internationalisation, and on the strategy of business model replication. We then outline our research method (additional details are provided in the Appendix) before presenting our findings. The paper ends with a discussion and conclusion that focuses on the implications of our findings for theory and practice.