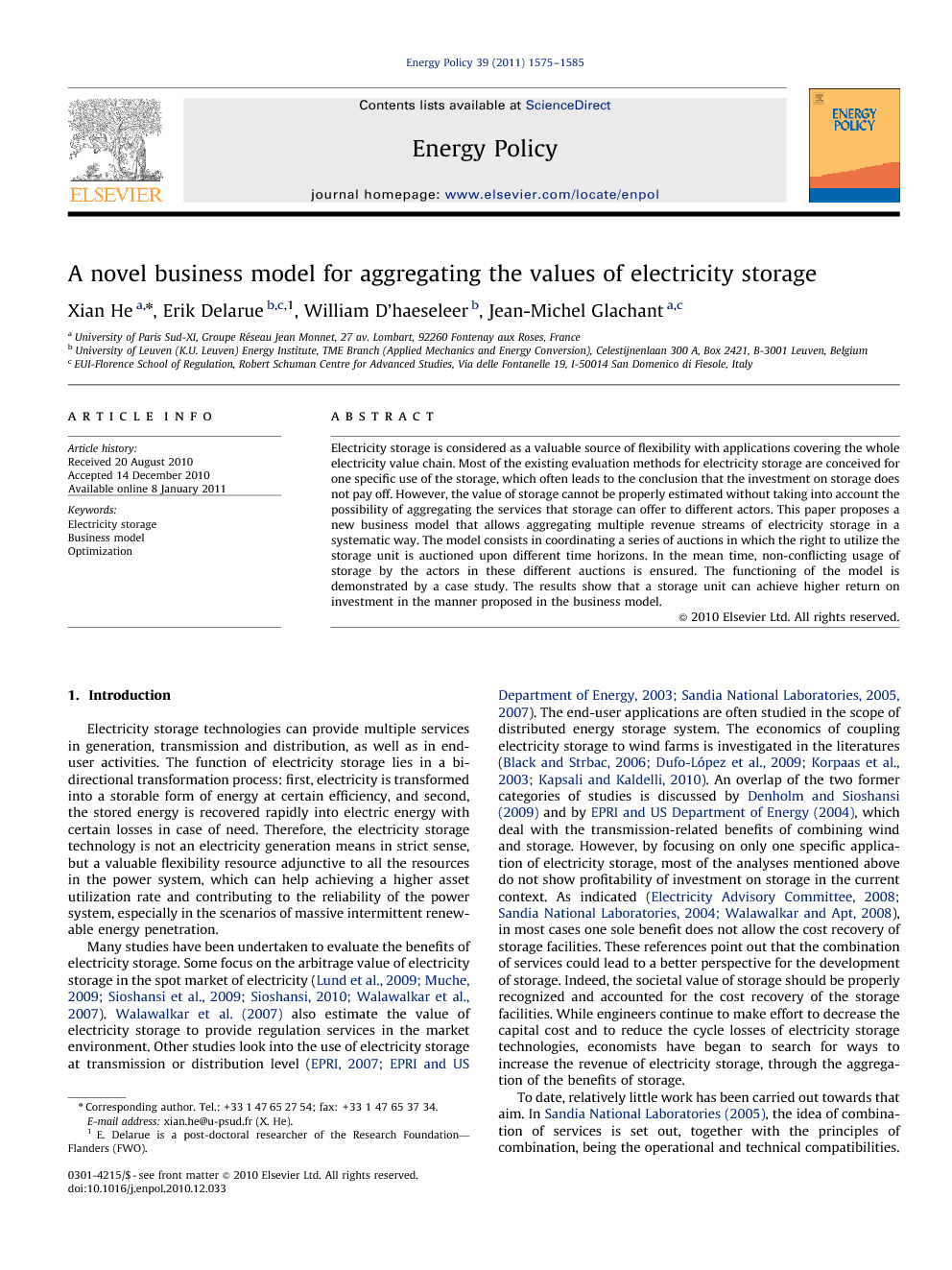 Electricity storage is considered as a valuable source of flexibility with applications covering the whole electricity value chain. Most of the existing evaluation methods for electricity storage are conceived for one specific use of the storage, which often leads to the conclusion that the investment on storage does not pay off. However, the value of storage cannot be properly estimated without taking into account the possibility of aggregating the services that storage can offer to different actors. This paper proposes a new business model that allows aggregating multiple revenue streams of electricity storage in a systematic way. The model consists in coordinating a series of auctions in which the right to utilize the storage unit is auctioned upon different time horizons. In the mean time, non-conflicting usage of storage by the actors in these different auctions is ensured. The functioning of the model is demonstrated by a case study. The results show that a storage unit can achieve higher return on investment in the manner proposed in the business model.

Electricity storage technologies can provide multiple services in generation, transmission and distribution, as well as in end-user activities. The function of electricity storage lies in a bi-directional transformation process: first, electricity is transformed into a storable form of energy at certain efficiency, and second, the stored energy is recovered rapidly into electric energy with certain losses in case of need. Therefore, the electricity storage technology is not an electricity generation means in strict sense, but a valuable flexibility resource adjunctive to all the resources in the power system, which can help achieving a higher asset utilization rate and contributing to the reliability of the power system, especially in the scenarios of massive intermittent renewable energy penetration. Many studies have been undertaken to evaluate the benefits of electricity storage. Some focus on the arbitrage value of electricity storage in the spot market of electricity (Lund et al., 2009, Muche, 2009, Sioshansi et al., 2009, Sioshansi, 2010 and Walawalkar et al., 2007). Walawalkar et al. (2007) also estimate the value of electricity storage to provide regulation services in the market environment. Other studies look into the use of electricity storage at transmission or distribution level (EPRI, 2007, EPRI, US Department of Energy, 2003, Sandia National Laboratories, 2005 and Sandia National Laboratories, 2007). The end-user applications are often studied in the scope of distributed energy storage system. The economics of coupling electricity storage to wind farms is investigated in the literatures (Black and Strbac, 2006, Dufo-López et al., 2009, Korpaas et al., 2003 and Kapsali and Kaldelli, 2010). An overlap of the two former categories of studies is discussed by Denholm and Sioshansi (2009) and by EPRI and US Department of Energy (2004), which deal with the transmission-related benefits of combining wind and storage. However, by focusing on only one specific application of electricity storage, most of the analyses mentioned above do not show profitability of investment on storage in the current context. As indicated (Electricity Advisory Committee, 2008, et al., 2004 and Walawalkar and Apt, 2008), in most cases one sole benefit does not allow the cost recovery of storage facilities. These references point out that the combination of services could lead to a better perspective for the development of storage. Indeed, the societal value of storage should be properly recognized and accounted for the cost recovery of the storage facilities. While engineers continue to make effort to decrease the capital cost and to reduce the cycle losses of electricity storage technologies, economists have began to search for ways to increase the revenue of electricity storage, through the aggregation of the benefits of storage. To date, relatively little work has been carried out towards that aim. In Sandia National Laboratories (2005), the idea of combination of services is set out, together with the principles of combination, being the operational and technical compatibilities. EPRI and US Department of Energy (2004) and Walawalkar and Apt (2008) test several combination options for case studies. Although these studies provide valuable insight of combined benefit of storage, they feature several weaknesses. First, the combination options are case-specific and therefore hard to generalize. This would create difficulty to establish general and non-discriminatory regulation on storage. Second, for a certain combination option, the allocation of storage resource for different services is defined beforehand instead of being the result of an optimization. The common approach for such allocation is to designate a certain period of time during which the storage is dedicated only to one service. As a result, the use of storage at a certain time is still exclusive, which implies in fact a “division” of the storage resource for different services along the time. Third, the combination options studied in these analyses might be specific to the electricity landscape in the US, where the integrated actors can quite easily merge several applications of storage that fall in different spheres of activities. However, the viability of some combination options would be questioned in Europe, where the electricity sector is unbundled and deregulated. In Europe, the challenge of aggregating the values of storage is more related to the questions: (1) how the regulated actors and deregulated actors can share the use of one storage unit, and (2) how the decentralized use of storage by different actors can be effectively coordinated. As an answer to these questions, we propose a business model that allows systematically aggregating the values of storage in deregulated electricity sectors. The new business model distinguishes itself from the existing methods in that it does not predefine the service that the storage is supposed to offer, nor does it reserve the capacities of the storage in advance for a certain service. The model consists in arranging a series of auctions in which the right to utilize the storage unit is auctioned in different time horizons. The aggregation of values of storage is achieved by superposing the utilization profiles of storage resulting from the auctions chain. A non-conflicting usage of the storage unit is ensured by communicating the utilization profiles resulting from the previous auctions to the actors in the next auction, who are required to respect the utilization profiles previously established when elaborating their own strategy on the use of storage. The paper is structured as follows. Section 2 introduces the concept of the business model. The mathematic formulation of the model is presented in Section 3. In Section 4, we demonstrate the functioning of the model by a case study, together with a discussion of the key results. Section 5 concludes the paper.

This paper presents a new business model which enables to aggregate the values of storage in the liberalized electricity sector. The core idea of the model lies in organizing an auction chain in which the right to use available capacities of storage is auctioned among different actors. The aggregation of values is achieved by superposing the utilization profiles resulting from the chaining auctions. The model proves that it is technically possible to coordinate the use of the storage unit by different actors. The simulation results show that a storage unit can better recover its investment cost by aggregating the value of storage to different actors/services in the manner described in this business model. The coordination algorithm proposed in the model is a generic one and is able to coordinate any utilization profiles without the need to know the underlying service. So the model is ready to simulate more case studies on other applications of storage. More importantly, the generic coordination algorithm is crucial to introduce sufficient and fair competitions among all actors in each auction. The business model represents an attempt to solve the current investment puzzle of electricity storage units. The economic viability of electricity storage technologies have been long sought, but never achieved in a general sense. One important reason is the lack of a proper mechanism which allows the investor to capture the overall value of storage by providing multiple services to the power system. The efforts to aggregate several revenue streams of storage often encounter the regulatory obstacles which forbid the exchange of information between different actors, especially between the regulated actors and deregulated actors. In the proposed business model, the information about the use of storage is summarized in the utilization profile resulting from the auction, and is shared among all the actors in the next auction as a common constraint to obey. On top of that, a market rule is applied to select the winner in an auction. The product offered in the auctions is storage in the strict sense. This means that every actor has to ensure the balance between his injections and withdrawals, having a net zero injection or withdrawal at the end of the considered time horizon. Allowing for net-actions (without compensation) might be subject for future research. In the case study, we have shown how a TSO can use the remaining capacities of storage after the closure of commercial exchanges in order to provide regulation power in the real time. This conduct seems to be consistent with the current regulation that prevents the regulated actors to touch the commercial activities. In this model, the TSO neither takes ownership over the storage unit (which is generally not allowed by the regulation in Europe), nor interferes with the commercial use of storage. It is considered as a viable way to allow aggregating the “deregulated” and “regulated” values of storage. Still, regulation is believed to plays the key role in the development of electricity storage. The lack of specific regulation for storage would lead to high investment uncertainties, while a regulation that fails to recognize the value of storage for the whole system would constitute a barrier for the deployment of storage in the power system. Once the storage is recognized as a “system” resource, as it actually is, we have reasons to believe that the cost of storage should be recovered by both the “deregulated” values and “regulated” values. Hence, the challenge for the policymakers and regulators is to design appropriate mechanisms to coordinate the use of storage with credible signals and without bias to specific actors. The business model proposed in the paper could add to the reflections on this issue.