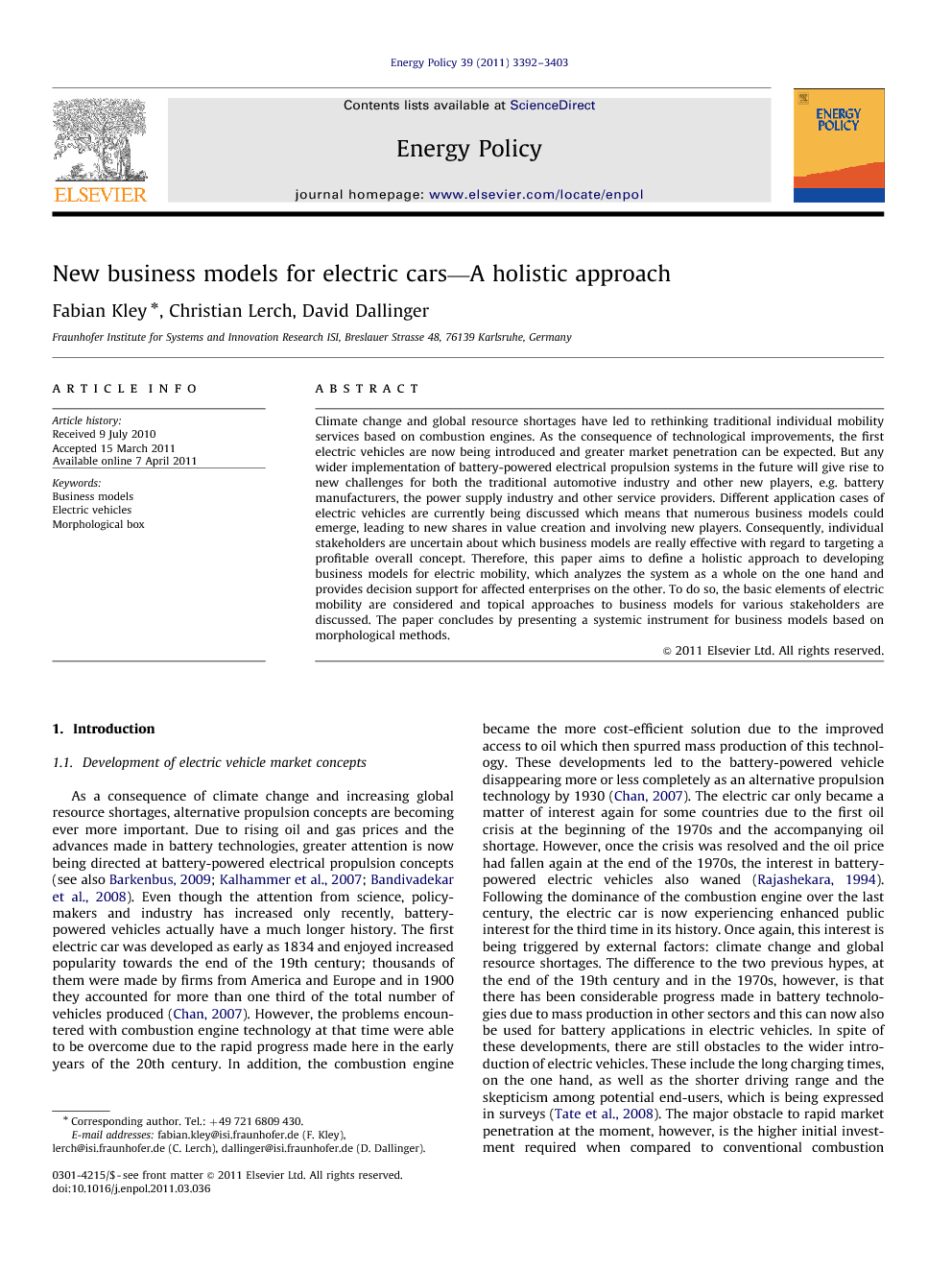 Climate change and global resource shortages have led to rethinking traditional individual mobility services based on combustion engines. As the consequence of technological improvements, the first electric vehicles are now being introduced and greater market penetration can be expected. But any wider implementation of battery-powered electrical propulsion systems in the future will give rise to new challenges for both the traditional automotive industry and other new players, e.g. battery manufacturers, the power supply industry and other service providers. Different application cases of electric vehicles are currently being discussed which means that numerous business models could emerge, leading to new shares in value creation and involving new players. Consequently, individual stakeholders are uncertain about which business models are really effective with regard to targeting a profitable overall concept. Therefore, this paper aims to define a holistic approach to developing business models for electric mobility, which analyzes the system as a whole on the one hand and provides decision support for affected enterprises on the other. To do so, the basic elements of electric mobility are considered and topical approaches to business models for various stakeholders are discussed. The paper concludes by presenting a systemic instrument for business models based on morphological methods.

This article develops an instrument to analyze business models in the field of electric mobility. Morphological boxes were constructed for the domains “vehicle and battery”, “infrastructure” and “system services” to capture the complex interrelations between aspects from the transport and electricity sectors. The article aims at a structured and holistic analysis of business models in the domain of electric mobility. To start with, examples of business models already being practiced were listed and their applications were analyzed. One finding is that activities have been initiated in all the domains, but that these are often being realized as pilot ventures with undefined or unclear business model structures. With the help of theoretical and methodological basic principles, a structured, descriptive model was then developed for business models for battery-powered electric vehicles. As well as showing potential design options, the morphological boxes constructed here also reveal the limitations when designing business models due to technical and organizational restrictions. Combining theory and practice by applying the morphological boxes to the Better Place business model corroborates the viability of the concept and tests its claim of taking a holistic view. The morphological method aims to support companies on a strategic level with a sound concept when developing a business model, to refine first ideas and approaches and list alternatives. Nevertheless, this paper does not attempt to provide detailed individual solutions for all business levels, or to make statements about the general advantages of individual business models. Nor should the morphological boxes be regarded as a fixed, unchanging concept, but rather as the first step towards a structured description and definition of business models in the field of electric mobility. Further developments are conceivable in the future such as more detailed representations of single business areas or overarching concepts which portray electric vehicles as merely one aspect of much broader mobility concepts.