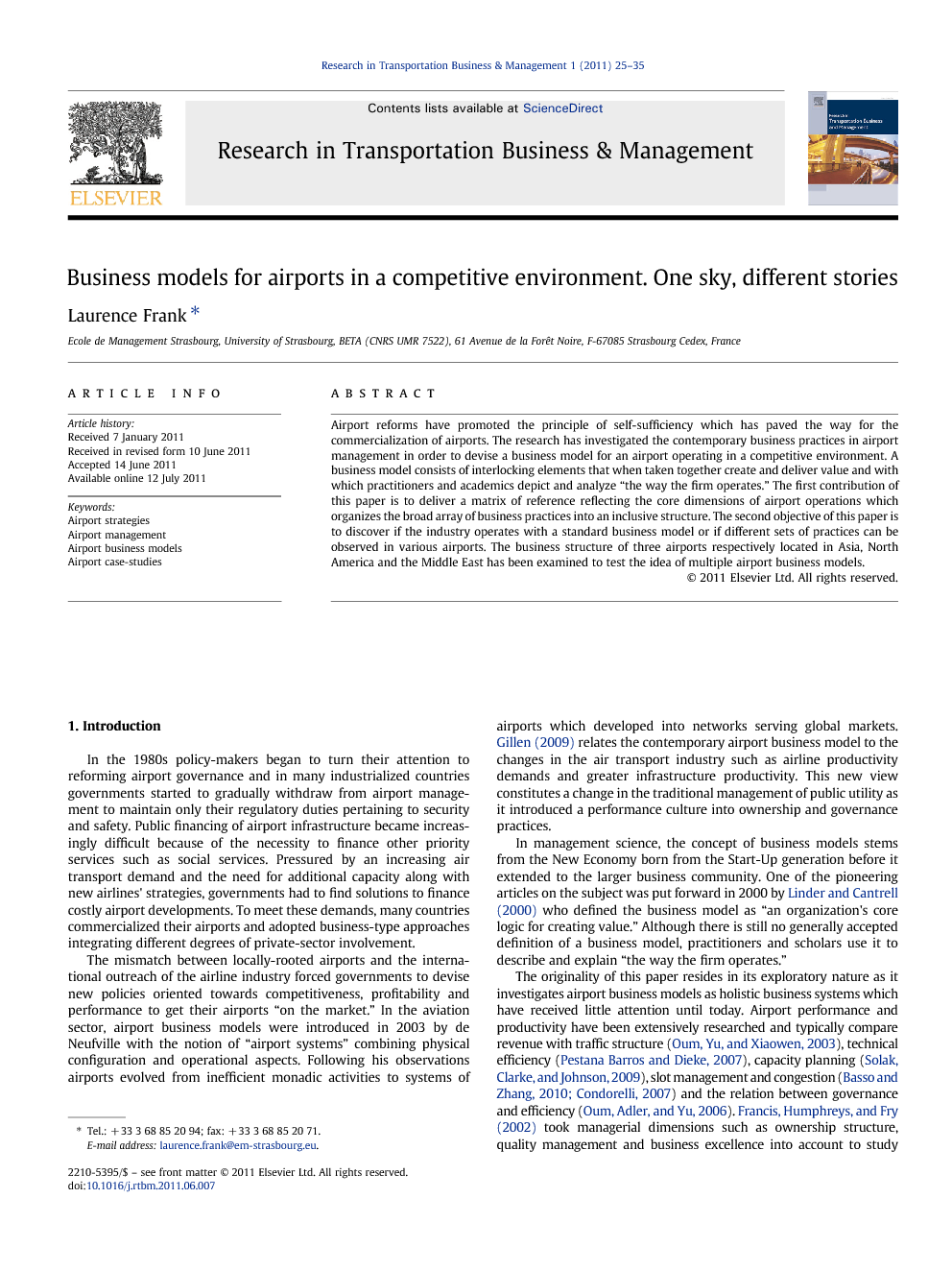 Airport reforms have promoted the principle of self-sufficiency which has paved the way for the commercialization of airports. The research has investigated the contemporary business practices in airport management in order to devise a business model for an airport operating in a competitive environment. A business model consists of interlocking elements that when taken together create and deliver value and with which practitioners and academics depict and analyze “the way the firm operates.” The first contribution of this paper is to deliver a matrix of reference reflecting the core dimensions of airport operations which organizes the broad array of business practices into an inclusive structure. The second objective of this paper is to discover if the industry operates with a standard business model or if different sets of practices can be observed in various airports. The business structure of three airports respectively located in Asia, North America and the Middle East has been examined to test the idea of multiple airport business models.

In the 1980s policy-makers began to turn their attention to reforming airport governance and in many industrialized countries governments started to gradually withdraw from airport management to maintain only their regulatory duties pertaining to security and safety. Public financing of airport infrastructure became increasingly difficult because of the necessity to finance other priority services such as social services. Pressured by an increasing air transport demand and the need for additional capacity along with new airlines' strategies, governments had to find solutions to finance costly airport developments. To meet these demands, many countries commercialized their airports and adopted business-type approaches integrating different degrees of private-sector involvement. The mismatch between locally-rooted airports and the international outreach of the airline industry forced governments to devise new policies oriented towards competitiveness, profitability and performance to get their airports “on the market.” In the aviation sector, airport business models were introduced in 2003 by de Neufville with the notion of “airport systems” combining physical configuration and operational aspects. Following his observations airports evolved from inefficient monadic activities to systems of airports which developed into networks serving global markets. Gillen (2009) relates the contemporary airport business model to the changes in the air transport industry such as airline productivity demands and greater infrastructure productivity. This new view constitutes a change in the traditional management of public utility as it introduced a performance culture into ownership and governance practices. In management science, the concept of business models stems from the New Economy born from the Start-Up generation before it extended to the larger business community. One of the pioneering articles on the subject was put forward in 2000 by Linder and Cantrell (2000) who defined the business model as “an organization's core logic for creating value.” Although there is still no generally accepted definition of a business model, practitioners and scholars use it to describe and explain “the way the firm operates.” The originality of this paper resides in its exploratory nature as it investigates airport business models as holistic business systems which have received little attention until today. Airport performance and productivity have been extensively researched and typically compare revenue with traffic structure (Oum, Yu, and Xiaowen, 2003), technical efficiency (Pestana Barros and Dieke, 2007), capacity planning (Solak, Clarke, and Johnson, 2009), slot management and congestion (Basso and Zhang, 2010 and Condorelli, 2007) and the relation between governance and efficiency (Oum, Adler, and Yu, 2006). Francis, Humphreys, and Fry (2002) took managerial dimensions such as ownership structure, quality management and business excellence into account to study the benchmarking of airport performance. As few studies have examined the business structure in its entirety to assess an airport's global output, the business model concept was deemed appropriate in order to capture what matters in the airport business today. Two central themes are developed in this paper. First, the airport business model builds on a matrix of reference gathering the core dimensions of airport operations in a competitive environment. Second, airports worldwide are endowed with the same mission but vary in terms of scale, function and outreach, and the heterogeneity of these structures is likely to produce multiple business models. Thus, this research is aimed at discussing if the industry operates with a standard model or if the sets of practices observed in various airports shape different business models. Before the three case-studies and their salient features are outlined, the methodology supporting this exploratory field research is presented. The next section then reviews the business model theory and the distinctive attributes of airport operations in order to see if the specifics of the airport industry lead to a sectorized business model. The elements supplied by the case-studies are subsequently analyzed with this theoretical airport business model matrix in order to distinguish similar from diverging business practices. These results will be discussed in the final section to establish whether a standard business model prevails in the airport industry or if several models co-exist as a result of a heterogeneous business environment.

The quality of a business model depends on its capacity to supply a holistic view on the way the airport operates. Whether a standard business matrix leads to a universal airport business model is debated in this paper and the findings reflect a great variety of practices suggesting that most decisions are based on local considerations rather than on pre-established procedures. The case studies show that there are no two identical airport business models within a sample of three. This can be partly explained by the number of possible combinations associated to a single component. Moreover, the overarching philosophy observed in each model materializes in a set of practices deriving from a supra-organizational mindset. With regards to the components themselves, i.e. governance-mix, a great variety of practices and aspirations can be observed in each situation. The industry applies a traditional financial structure splitting income in two categories: aeronautical and non aeronautical income, but the analysis shows that the revenue model varies in each airport due to the range of factors taken into account to design the key profit formula. The findings also indicate that a financial structure depends on a complex arrangement of tangible and intangible dimensions considered on a case-by-case basis by the actors involved. Modernization entailed in all three experiences aligning airports to norms and complying with international standards and regulation. Process organization is similar in all airports especially when it comes to ground-handling, service to aircraft and runway management due to international certifications and regulation. From the three experiences, it was observed that additional resources can arise from the creativity, the imagination of the operators but also from locally available resources. MIL improved the customer value proposition with free translation in 60 languages inside the terminal. MAK avoided potential shortages of drinking water in the city with sea water desalinization. TIA made its food court available to all visitors and employees and provided a leisure area outside the airport. All three airports offer standard facilities such as duty-free stores, souvenir booths and coffee shops. It can therefore be inferred from the sample of airports that all business model components are influenced if not dominated by contextual circumstances. As a result, the possibility that a standard airport business model prevails in the industry is dismissed. The concessionaire of TIA confirmed that modernizing an airport to make it a profitable business involves multiple dimensions pertaining to geographical location, political regimes and economic factors. The findings tend to support this opinion and even suggest that each business model is a “unique object.” The first objective of this paper was to conceptualize a business model reflecting the specifics of the airport industry in order to later compare business practices of different airports with a tool of reference. Accordingly, the first ambition of this exploratory research was to provide a matrix of reference collecting the core dimensions of the airport business leading to a theoretical architecture capturing the “DNA” of the airport business model. The application of the model to practical situations enabled a realization that business model components cannot just be piled up like bricks to reflect the “way the airport operates.” A business model is a dynamic structure subject to interdependencies and hierarchical effects. If the design of the business model matrix can be considered standard, the variety of choices and combinations of practices inventoried in different locations indicates that several combinations of business practices prevail in the airport sector which produce multiple if not unique business schemes. These findings have meant that it can be initially concluded that airport business models are in essence heterogeneous. Although the reduced sample of airports has prevented any possibility to generalize, it can be inferred that business models vary for contextual reasons and that the influential if not determinant nature of local factors requires customized airport business models. Further research on a larger sample of airports would allow these conclusions to be tested on a larger scale and to pay more attention to the structure of the business model itself in order to investigate how business models can enable airports to build a competitive advantage and not just become profitable.