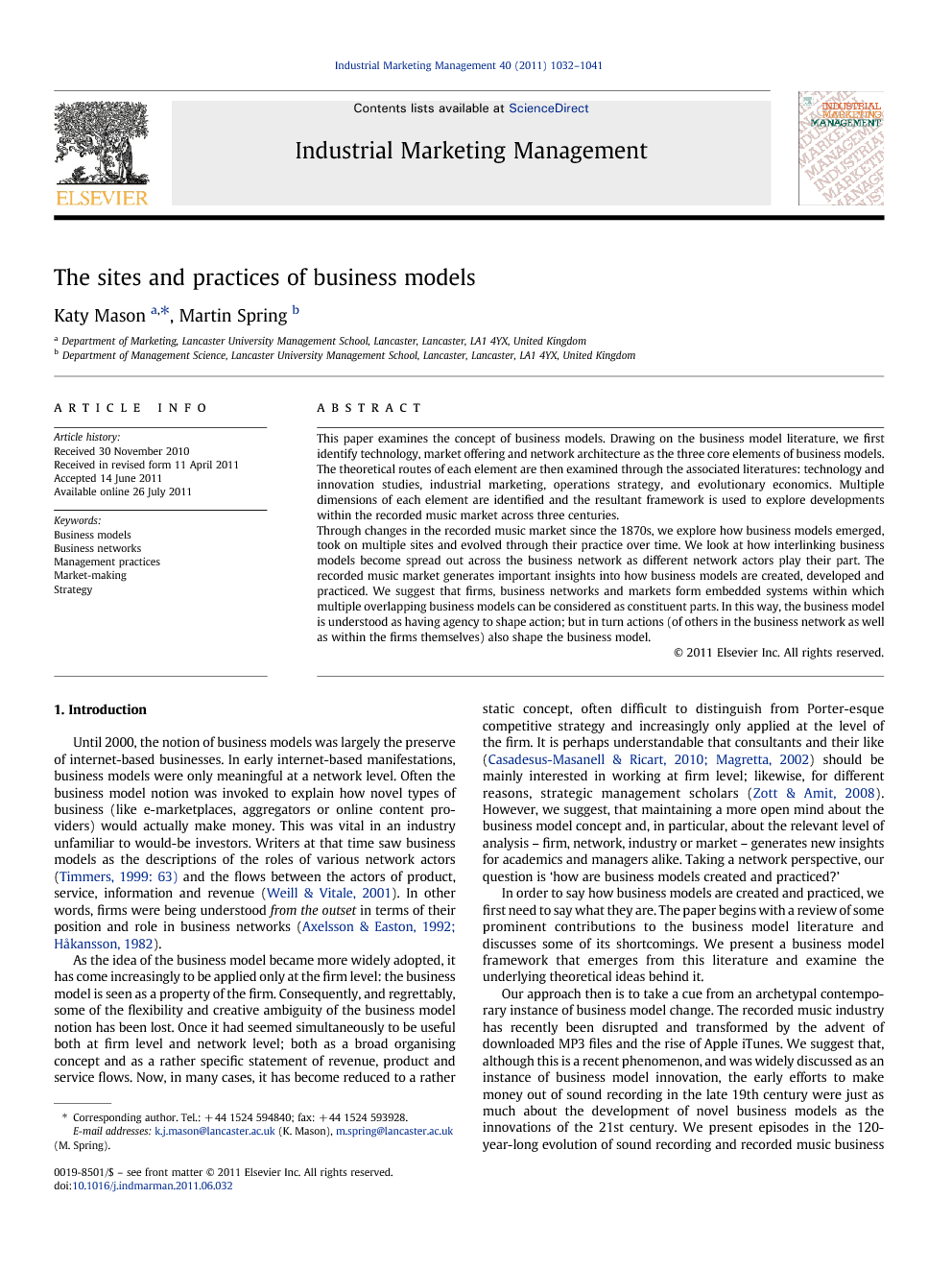 Until 2000, the notion of business models was largely the preserve of internet-based businesses. In early internet-based manifestations, business models were only meaningful at a network level. Often the business model notion was invoked to explain how novel types of business (like e-marketplaces, aggregators or online content providers) would actually make money. This was vital in an industry unfamiliar to would-be investors. Writers at that time saw business models as the descriptions of the roles of various network actors (Timmers, 1999: 63) and the flows between the actors of product, service, information and revenue (Weill & Vitale, 2001). In other words, firms were being understood from the outset in terms of their position and role in business networks ( Axelsson and Easton, 1992 and Håkansson, 1982). As the idea of the business model became more widely adopted, it has come increasingly to be applied only at the firm level: the business model is seen as a property of the firm. Consequently, and regrettably, some of the flexibility and creative ambiguity of the business model notion has been lost. Once it had seemed simultaneously to be useful both at firm level and network level; both as a broad organising concept and as a rather specific statement of revenue, product and service flows. Now, in many cases, it has become reduced to a rather static concept, often difficult to distinguish from Porter-esque competitive strategy and increasingly only applied at the level of the firm. It is perhaps understandable that consultants and their like (Casadesus-Masanell and Ricart, 2010 and Magretta, 2002) should be mainly interested in working at firm level; likewise, for different reasons, strategic management scholars (Zott & Amit, 2008). However, we suggest, that maintaining a more open mind about the business model concept and, in particular, about the relevant level of analysis – firm, network, industry or market – generates new insights for academics and managers alike. Taking a network perspective, our question is ‘how are business models created and practiced?’ In order to say how business models are created and practiced, we first need to say what they are. The paper begins with a review of some prominent contributions to the business model literature and discusses some of its shortcomings. We present a business model framework that emerges from this literature and examine the underlying theoretical ideas behind it. Our approach then is to take a cue from an archetypal contemporary instance of business model change. The recorded music industry has recently been disrupted and transformed by the advent of downloaded MP3 files and the rise of Apple iTunes. We suggest that, although this is a recent phenomenon, and was widely discussed as an instance of business model innovation, the early efforts to make money out of sound recording in the late 19th century were just as much about the development of novel business models as the innovations of the 21st century. We present episodes in the 120-year-long evolution of sound recording and recorded music business models as a way to illustrate and explore the framework. Using aspects of practice theory, we examine the multiple and changing sites of the business models, and the various combinations of practices through which this happens. We argue that a multi-level, multi-site approach to business models is useful in helping managers understand how to frame and co-ordinate collective action.

This paper set out to explore the sites and practices of business models. We have argued that the value of business models lies in their ability to frame action and reveal connexions between those actions, across multiple levels of analysis. We seek here to connect micro to the macro level practices: from individual actions of front-line workers to the market level actions of networked organisations. We argue that it is through the practice of business models that the sites of business models proliferate and the dynamics of business models allow them to evolve. In so doing, the paper offers three key contributions. First, it presents a business model framework through theoretical synthesis that identifies what business models are. Drawing together concepts from technology and innovation studies, industrial marketing, operations and service strategy, and evolutionary economics, the paper provides a much deeper understanding of what business models are and how they are theorised. The key contribution of the business model framework lies in the examination of the underlying theory of the three business model elements. We use this theory to identify multiple dimensions of each element and the connexions between them. As Van Maanen, Sörensen, and Mitchell (2007) explain so compellingly, theory and method are deeply inter-connected. Hence, if we are to maintain the multi-level approach to business model analysis that makes it so effective, we must resist the temptation to fix it within any one established literature. Economists study industries, innovation scholars study technologies, strategy researchers study firms: all have their part to play in explaining the phenomena of interest here, but there is a risk that the adoption of any one theoretical grounding will unduly restrict the framing of a research programme. In this way, business model theory stands to contribute to management practice by offering a framework that, when populated by managers, may help frame purpose-oriented action (Latour, 2005). Business models may adopt multiple manifestations in the form of PowerPoint presentations, strategy documents or targets used for directing action of the business and even the businesses of their collaborative partners, within any given market context (Geiger & Finch, 2009). Second, the business model framework presented here offers an analytical framework through which managers can seek to make sense of and share understanding between individuals, groups and organisations of what the situation is in order to ‘work out’ what is to be done. Such framing of action is consistent with understanding not only what business models are, but what they do. That is, how they become embedded in markets, becoming a constituent part of what the market and what the firm is and does. This recognises that the ‘doing’ of business models is dependent on interactions with others in the market-place (Håkansson, 1982) and that the types of practices and spaces that form markets (and the models that describe them) are likely to be contingent, and context specific (Araujo, 2007). We find considerable benefit in using the framework, to understand how managers ‘do’ business models in ways that balance change and stability; innovation and risk. The framework is flexible in the sense that, being non-sequential, analysis can begin in any element or elements, depending on current concerns or opportunities. It also seems that there is considerable path dependence in the susceptibility of the various elements to innovation, as well as unanticipated dynamic interconnections between elements. In this way, business models are understood to have multiplying sites over time (Schatzki, 2005). Third, by understanding business models as a framing device for programmes of action, we explore the dynamic nature of business models as well as attributing agency to them; positioning them as a constituent part of any business that iteratively influences and is influenced by firm, inter-firm and market practices (Hagberg & Kjellberg, 2010). In this sense, business models might be understood as bundles of interconnecting practices that evolve with the context within which they are practiced – but that in turn influence and shape the context. Thus, changes in technology practices are likely to lead to changes in network architecture and so on (see for example, Geiger & Finch, 2009). In this way, the business model framework identifies different types of management practices that drive the development of business models in manufacturing and service settings; technology practices; market offering practices and network architecture practices. But, in the process of business these practices interconnect and enable the business to operate as a whole, making and shaping markets. In sum, the paper represents one of the first attempts to link a conceptualisation of what business models are with what they do, through an examination of the theory behind business models in parallel with an historical analysis of the recorded music industry. The paper suggests that what managers do with and to business models as they develop is a central part of management innovation practice (Birkinshaw et al., 2008). However, this is not a sustained empirical study. We need in-depth, longitudinal, ethnographic studies to help us understand how managers develop, represent, translate and transform business models through situated management practice. Such studies would shed light on the managerial tools used to represent and circulate knowledge within and between organisations, industries and across multiple geographies as managers zoom out and take the macro lens on their business and markets. Similarly, such studies stand to generate insights that might help international managers successfully translate a single business model from one geography to another while embracing (rather than ignoring) the heterogeneity of markets. This research would foreground managers zooming in to focus on the performance and practices of specific, individual markets (Nicolini, 2010). Future research might also focus on generating insights into the proliferation of business models across business networks as technologies, market offerings and network architectures become shared, overlapping and interlinked. For now, it seems that we are just beginning to understand the practices of business models and their agency in making markets, but there is much work to be done.