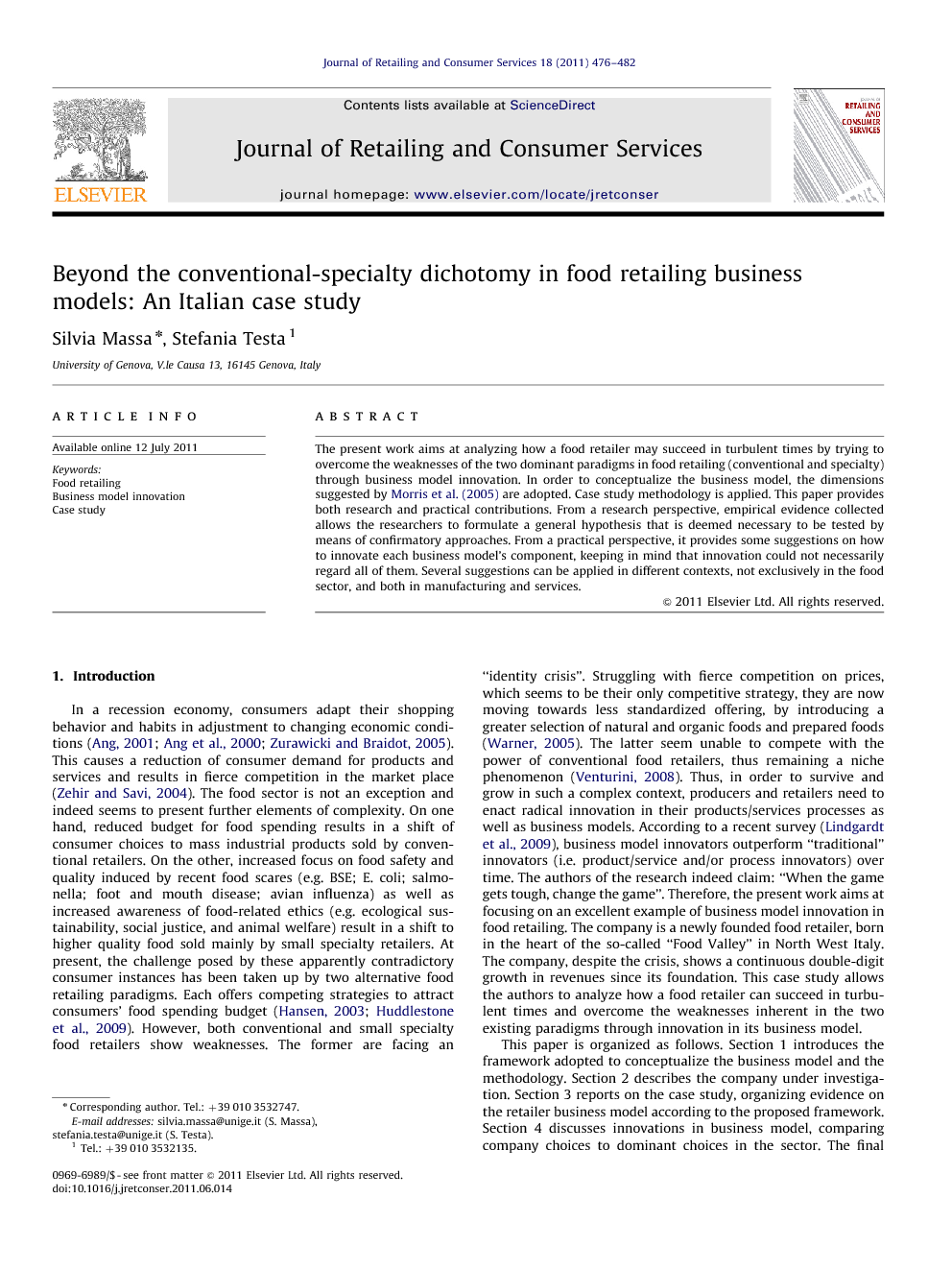 The present work aims at analyzing how a food retailer may succeed in turbulent times by trying to overcome the weaknesses of the two dominant paradigms in food retailing (conventional and specialty) through business model innovation. In order to conceptualize the business model, the dimensions suggested by Morris et al. (2005) are adopted. Case study methodology is applied. This paper provides both research and practical contributions. From a research perspective, empirical evidence collected allows the researchers to formulate a general hypothesis that is deemed necessary to be tested by means of confirmatory approaches. From a practical perspective, it provides some suggestions on how to innovate each business model's component, keeping in mind that innovation could not necessarily regard all of them. Several suggestions can be applied in different contexts, not exclusively in the food sector, and both in manufacturing and services.

In a recession economy, consumers adapt their shopping behavior and habits in adjustment to changing economic conditions (Ang, 2001, Ang et al., 2000 and Zurawicki and Braidot, 2005). This causes a reduction of consumer demand for products and services and results in fierce competition in the market place (Zehir and Savi, 2004). The food sector is not an exception and indeed seems to present further elements of complexity. On one hand, reduced budget for food spending results in a shift of consumer choices to mass industrial products sold by conventional retailers. On the other, increased focus on food safety and quality induced by recent food scares (e.g. BSE; E. coli; salmonella; foot and mouth disease; avian influenza) as well as increased awareness of food-related ethics (e.g. ecological sustainability, social justice, and animal welfare) result in a shift to higher quality food sold mainly by small specialty retailers. At present, the challenge posed by these apparently contradictory consumer instances has been taken up by two alternative food retailing paradigms. Each offers competing strategies to attract consumers' food spending budget (Hansen, 2003 and Huddlestone et al., 2009). However, both conventional and small specialty food retailers show weaknesses. The former are facing an “identity crisis”. Struggling with fierce competition on prices, which seems to be their only competitive strategy, they are now moving towards less standardized offering, by introducing a greater selection of natural and organic foods and prepared foods (Warner, 2005). The latter seem unable to compete with the power of conventional food retailers, thus remaining a niche phenomenon (Venturini, 2008). Thus, in order to survive and grow in such a complex context, producers and retailers need to enact radical innovation in their products/services processes as well as business models. According to a recent survey (Lindgardt et al., 2009), business model innovators outperform “traditional” innovators (i.e. product/service and/or process innovators) over time. The authors of the research indeed claim: “When the game gets tough, change the game”. Therefore, the present work aims at focusing on an excellent example of business model innovation in food retailing. The company is a newly founded food retailer, born in the heart of the so-called “Food Valley” in North West Italy. The company, despite the crisis, shows a continuous double-digit growth in revenues since its foundation. This case study allows the authors to analyze how a food retailer can succeed in turbulent times and overcome the weaknesses inherent in the two existing paradigms through innovation in its business model. This paper is organized as follows. Section 1 introduces the framework adopted to conceptualize the business model and the methodology. Section 2 describes the company under investigation. Section 3 reports on the case study, organizing evidence on the retailer business model according to the proposed framework. Section 4 discusses innovations in business model, comparing company choices to dominant choices in the sector. The final section summarizes the paper's main findings and contributions to literature, as well as suggesting further research.

This paper aimed at analyzing how a food retailer can succeed in turbulent times as a result of business model innovations. The case presented is an example of total business model innovation in a sector that seems to be dominated by hypermarkets engaging in fierce cost-based competition and by specialty shops targeting niche markets. The data collected show that a third way is possible, a new effective way of competing that faces the weaknesses of conventional as well as specialty food retailer paradigms. Eataly is fostering a cultural revolution, by following the dictates of the experience economy and trying to convince customers that they can, and perhaps must, spend more to have top quality products. What seems to emerge from empirical evidence is that this revolution is possible only through pervasive innovation in the company's business model, which changes in all its components. Thus, this paper has attempted to provide both research-related and practical contributions. From the research perspective, empirical evidence collected has allowed the researchers to formulate a general hypothesis that is deemed necessary to be tested by means of confirmatory approaches: “H1: In order to gain a new effective way of competing in a given sector, innovation in all components of the business model is necessary”. This paper also provides some practical suggestions on how to innovate each component in a business model, bearing in mind that innovation need not necessarily regard all of them. For example, the suggestion of not treating customers like idiots can be useful advice not only in the food sector, but also in both manufacturing and services. In fact, consumers today seem to be increasingly able to thwart companies' tricks and attribute growing importance to authenticity from providers of goods and services. In an increasingly unreal world, consumers choose whether or not to buy based on how real they perceive an offering to be, thus authenticity becomes a marketing lever (Pine and Gilmore, 2007). In the same vein, the suggestion of explaining what the food price does not say, i.e. the ratio behind pricing, is another useful suggestion that can be applied in various contexts. A direct consequence of not treating customers like idiots is to explain how the price of products is generated. In the food sector, literature reports increased willingness among consumers to pay more as an effect of more detailed label information (Gao and Schroeder, 2009), which is one of the possible choices to explain what the food price does not say. Some limitations of this paper concern both methodology and findings. The methodology of this study tries to attenuate some of the reliability problems inherent in qualitative research by interviewing multiple informants with different positions inside the company. Triangulation using different types of data sources and systematic data analysis also serve to attenuate reliability concerns. Indeed, generalizability remains more of an issue. The discussion section frequently compares the findings of the case with conventional distribution chains, thus businesses with varying dimensions are considered on the same plane. Moreover, a start-up enterprise, which is by definition freer and faster in adopting innovative business model solutions, is compared to more mature businesses, which on the contrary are slower and more locked-in. Further research is needed to address any inconsistencies involved in these issues as well as make the methodology more robust by incorporating, for example, comparison with the business models of industry competitors and enlarging the informant base to include external stakeholders.