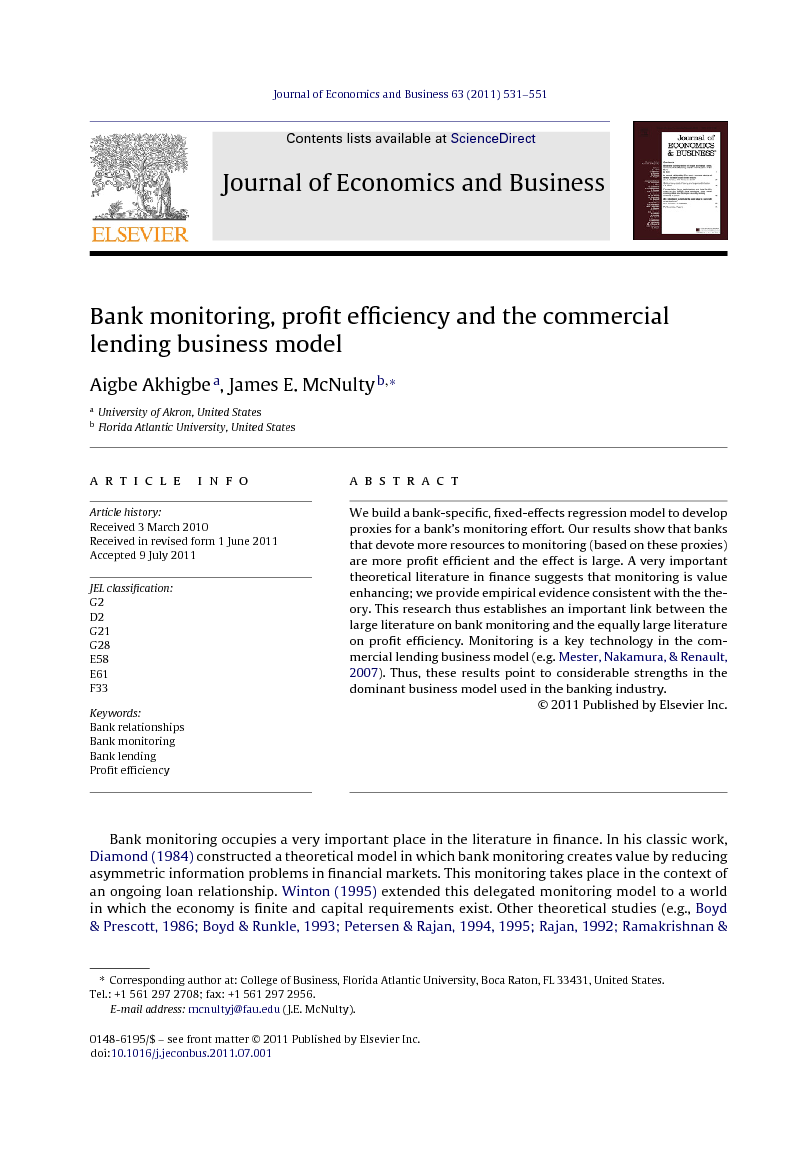 We build a bank-specific, fixed-effects regression model to develop proxies for a bank's monitoring effort. Our results show that banks that devote more resources to monitoring (based on these proxies) are more profit efficient and the effect is large. A very important theoretical literature in finance suggests that monitoring is value enhancing; we provide empirical evidence consistent with the theory. This research thus establishes an important link between the large literature on bank monitoring and the equally large literature on profit efficiency. Monitoring is a key technology in the commercial lending business model (e.g. Mester, Nakamura, & Renault, 2007). Thus, these results point to considerable strengths in the dominant business model used in the banking industry.

Bank monitoring occupies a very important place in the literature in finance (Boyd and Prescott, 1986, Boyd and Runkle, 1993, Diamond, 1984, Petersen and Rajan, 1994, Petersen and Rajan, 1995, Rajan, 1992 and Ramakrishnan and Thakor, 1984). Mester et al. (2007) provide an important empirical application. An implication of this literature is that banks that devote more resources to monitoring should have superior financial performance. We provide empirical evidence consistent with the theory. (We use the term monitoring to include both the initial underwriting decision and the subsequent screening of the borrowing firm.) We develop proxy variables based on labor input into the monitoring process to estimate which banks spend more resources in monitoring their loans than other banks. We estimate fixed-effects salary regressions for 2,295 banks classified as commercial lenders for the period from 1999 to 2005 and use the bank-specific fixed-effect coefficients as monitoring proxies. We focus on banks that are characterized by the FDIC as commercial lenders. This is the dominant business model in the banking industry. There are no mega banks in our sample. The sign of the monitoring proxies is positive and significant in the profit efficiency regression equation, suggesting that monitoring improves profit efficiency. Further, monitoring is one of the most important variables affecting profit efficiency. One reason for average levels of profit efficiency of only 76% (a finding in most profit efficiency studies, including this one) may be inadequate attention to monitoring. Our out-of-sample tests show that the monitoring proxies predict problem loan ratios 4 years in advance even during the period of the financial crisis. The weak incentives in the “originate-to-distribute” business model used in mortgage lending led to poor lending decisions which contributed significantly to the recent financial crisis. What is less apparent in popular discussion of the crisis is the point that the commercial lending business model is the dominant business model used in the industry. This model does not have comparable weaknesses because the loans are generally quite large and are kept on a bank's books, so there are major incentives to invest in monitoring. These are often relationship loans. Because of asymmetric information, relationship loans have more value to the originating bank than to any other bank, and are thus much less likely to be sold. Our results are consistent with the notion that the commercial lending business model creates value when the bank devotes adequate resources to the process. Our results should help banking practitioners and regulators consider the strengths of various business models as the industry emerges from the crisis.