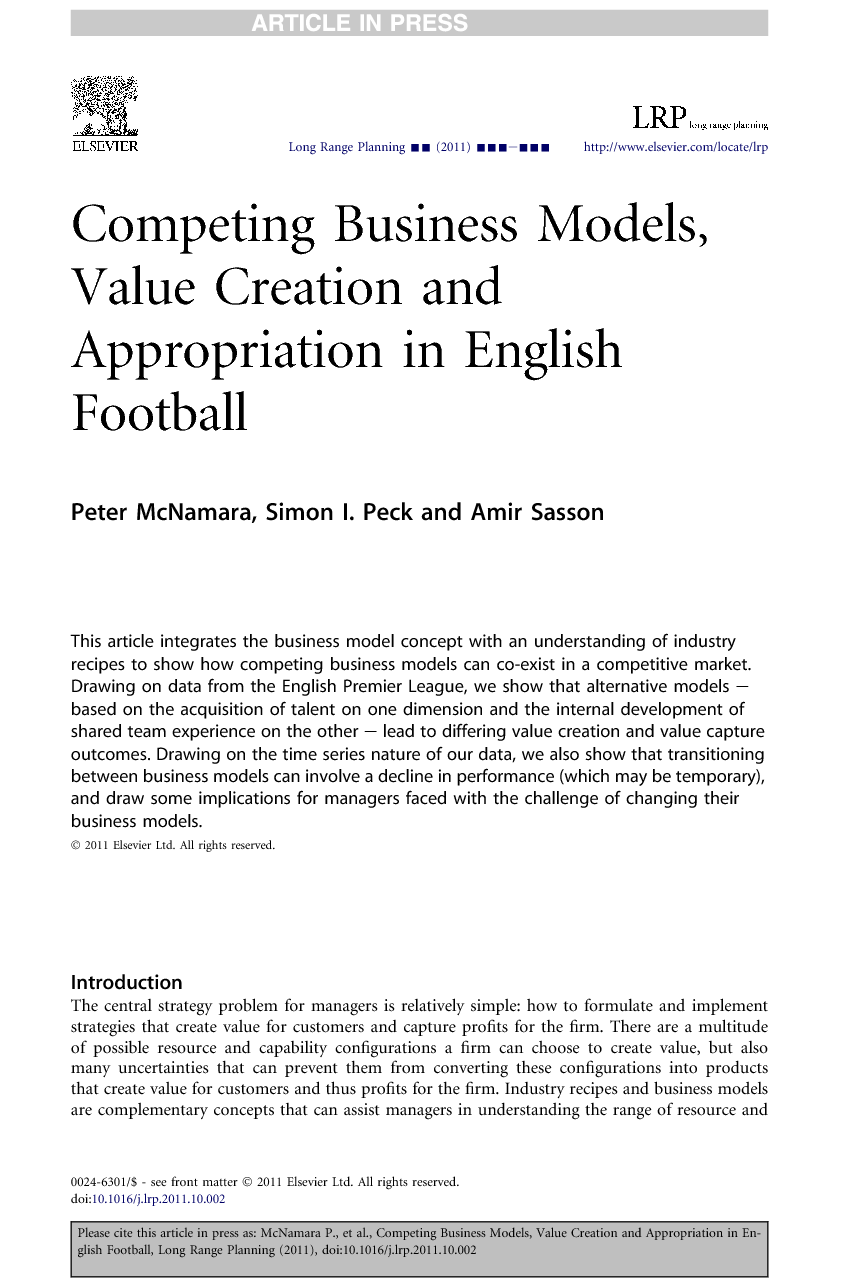 This article integrates the business model concept with an understanding of industry recipes to show how competing business models can co-exist in a competitive market. Drawing on data from the English Premier League, we show that alternative models – based on the acquisition of talent on one dimension and the internal development of shared team experience on the other – lead to differing value creation and value capture outcomes. Drawing on the time series nature of our data, we also show that transitioning between business models can involve a decline in performance (which may be temporary), and draw some implications for managers faced with the challenge of changing their business models.

The central strategy problem for managers is relatively simple: how to formulate and implement strategies that create value for customers and capture profits for the firm. There are a multitude of possible resource and capability configurations a firm can choose to create value, but also many uncertainties that can prevent them from converting these configurations into products that create value for customers and thus profits for the firm. Industry recipes and business models are complementary concepts that can assist managers in understanding the range of resource and capability configurations and uncertainties they face in selecting a strategy with a realistic probability of generating value for customers and capturing profits for their firm. The essence of an industry recipe, as espoused by Spender, is as “the shared knowledge base that those socialized into an industry take as familiar professional common sense” which can be used as aids in the management of strategic uncertainties (Spender, 1989: 63). A challenge in researching industry recipes is that the process by which an industry recipe is identified and the links between resource configuration options, value creation for customers and value capture for the firm is not only particular to the industry and firm, but also must be measured qualitatively to account for the unique perspectives of both managers and the industry. While in their broadest form recipes are shared, taken for granted understandings of the industry, in practice they are overlaid by the specific assumptions and practices of individual decision makers and firm contexts, thus moving the focus from general guidelines towards the challenge noted above. Teece (2010) notes that one of the key contributions of the business model approach is that it offers clear guidance as to “how a firm delivers value to customers and converts payment into profit” a point captured by Baden-Fuller and Morgan’s (2010) business models definitions table in their overview of the contributions to this journal’s Business Models Special Issue. In this article we outline the essential recipe that applies to English Premiership Football industry – which we term a ‘talent-based recipe’ – and use the business model approach to define four business model types based on two value creating resources and capabilities that are central to such industry recipes – the talent of the team’s players and the shared team experience they accumulate. While Teece (2010) argues that it is sufficient for a business model to focus on what resources and capabilities are associated with the creation and capture of value, this article is motivated by the problem that prior research in the talent war literature has told us little about the different resource and capability configurations of talent and accumulated shared team experience that can create both value for customers and capture profits for firms. Firms in the same industry differentiate themselves from each other, so not all will have the same strategy and associated business model, but it is important that they know what kinds of business model configurations are possible within an industry recipe, and more importantly whether and how firms can change between models. Must a firm choose a single business model, which cannot be changed afterwards, or can it evolve one successful business model configuration into another? The empirical question we seek to explore in this article is whether more than one stable business model configuration can exist within an industry. We consider the stability of a business model in terms of its ability to generate both value for the customer and adequate financial returns for the firm. If a firm’s business model cannot generate value for its customers, the stability of that typology over time must be questionable – will they continue to support such a firm with their custom? Nor can it regarded as being stable over the long term if it cannot deliver a financial return for the firm relative to the industry benchmark. Our research demonstrates that some resource and capability configurations of talent and accumulated shared team experience are associated with both success on the field of play (which we see as being akin to value creation for customers) and with higher financial performance relative to the industry for the firm (i.e., value capture). We find it is possible for firms to move between business models, but that doing so involves shifting via an uncertain transitional state business model – a ‘valley of death’ – where there is likely to be a precipitous decline in the profits captured by the firm. If the firm succeeds in managing these risks, then it can move onwards to another stable business model which is likely to increase value creation for its customers, but not increase profitability for the firm. We first offer an overview of the business model concept and then develop four business model typologies drawing on the ‘talent-based’ industry recipe, which we test using a decade of data recording the performance of English Premiership Football teams.