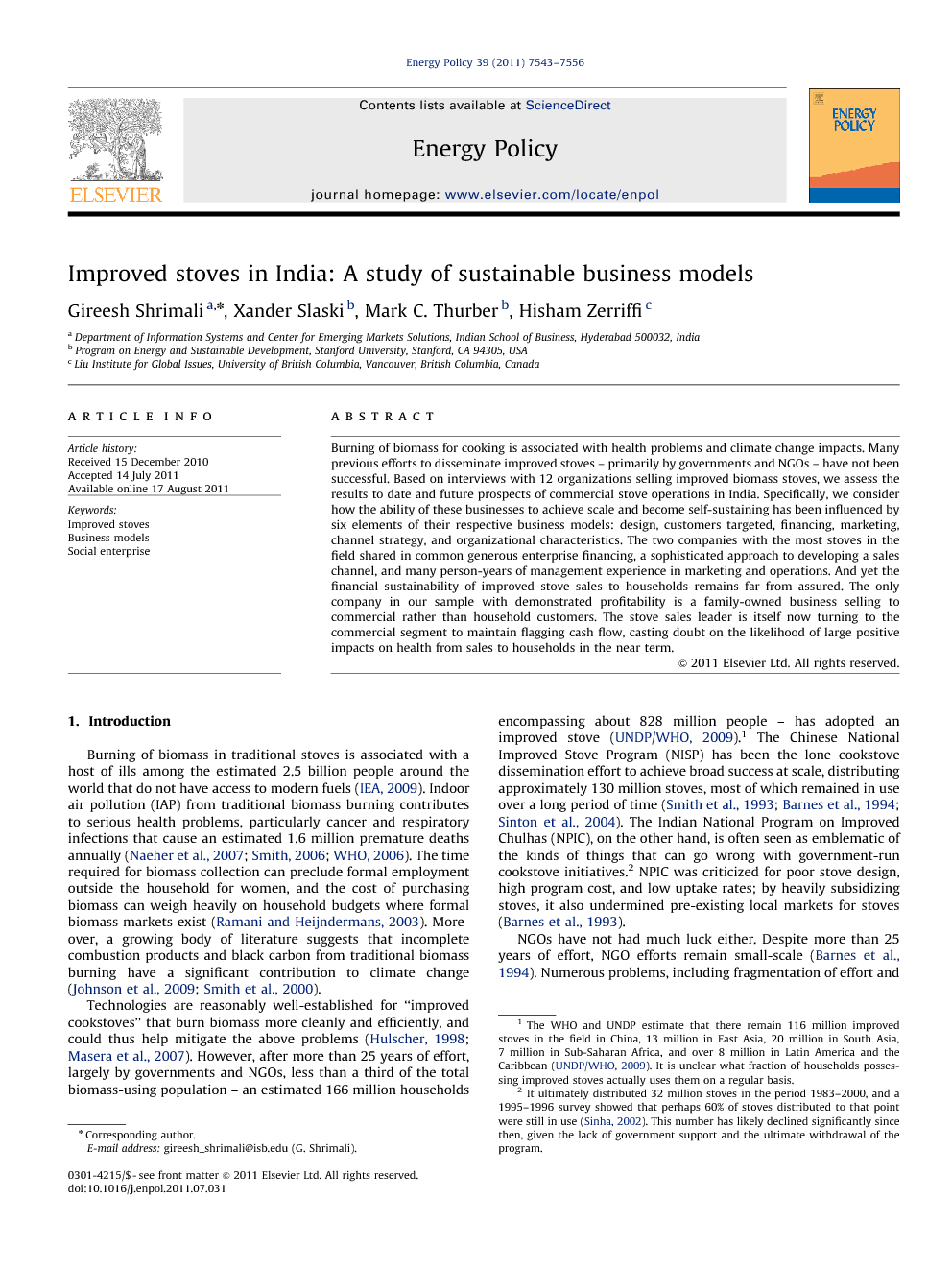 Burning of biomass for cooking is associated with health problems and climate change impacts. Many previous efforts to disseminate improved stoves – primarily by governments and NGOs – have not been successful. Based on interviews with 12 organizations selling improved biomass stoves, we assess the results to date and future prospects of commercial stove operations in India. Specifically, we consider how the ability of these businesses to achieve scale and become self-sustaining has been influenced by six elements of their respective business models: design, customers targeted, financing, marketing, channel strategy, and organizational characteristics. The two companies with the most stoves in the field shared in common generous enterprise financing, a sophisticated approach to developing a sales channel, and many person-years of management experience in marketing and operations. And yet the financial sustainability of improved stove sales to households remains far from assured. The only company in our sample with demonstrated profitability is a family-owned business selling to commercial rather than household customers. The stove sales leader is itself now turning to the commercial segment to maintain flagging cash flow, casting doubt on the likelihood of large positive impacts on health from sales to households in the near term.

Burning of biomass in traditional stoves is associated with a host of ills among the estimated 2.5 billion people around the world that do not have access to modern fuels (IEA, 2009). Indoor air pollution (IAP) from traditional biomass burning contributes to serious health problems, particularly cancer and respiratory infections that cause an estimated 1.6 million premature deaths annually (Naeher et al., 2007, Smith, 2006 and WHO, 2006). The time required for biomass collection can preclude formal employment outside the household for women, and the cost of purchasing biomass can weigh heavily on household budgets where formal biomass markets exist (Ramani and Heijndermans, 2003). Moreover, a growing body of literature suggests that incomplete combustion products and black carbon from traditional biomass burning have a significant contribution to climate change (Johnson et al., 2009 and Smith et al., 2000). Technologies are reasonably well-established for “improved cookstoves” that burn biomass more cleanly and efficiently, and could thus help mitigate the above problems (Hulscher, 1998 and Masera et al., 2007). However, after more than 25 years of effort, largely by governments and NGOs, less than a third of the total biomass-using population – an estimated 166 million households encompassing about 828 million people – has adopted an improved stove (UNDP/WHO, 2009).1 The Chinese National Improved Stove Program (NISP) has been the lone cookstove dissemination effort to achieve broad success at scale, distributing approximately 130 million stoves, most of which remained in use over a long period of time (Smith et al., 1993, Barnes et al., 1994 and Sinton et al., 2004). The Indian National Program on Improved Chulhas (NPIC), on the other hand, is often seen as emblematic of the kinds of things that can go wrong with government-run cookstove initiatives.2 NPIC was criticized for poor stove design, high program cost, and low uptake rates; by heavily subsidizing stoves, it also undermined pre-existing local markets for stoves (Barnes et al., 1993). NGOs have not had much luck either. Despite more than 25 years of effort, NGO efforts remain small-scale (Barnes et al., 1994). Numerous problems, including fragmentation of effort and insufficient attention to scalability and sustainability, have prevented such operations from expanding to serve a larger customer base (Edwards and Hulme, 1992 and Uvin et al., 2000). Overall, NGOs have not made a significant impact in increasing access to improved stoves; the vast majority of stoves now in use were distributed by government programs—particularly the Chinese and Indian programs (Barnes et al., 1994). The poor track records of government and strictly charitable efforts at large-scale and sustained diffusion of improved cookstoves have contributed to an increased focus on complementary commercial and market-driven solutions. In fact, the most successful stove program to date, China's NISP, combined a central push with locally coordinated efforts to create functioning markets for stoves. Similarly, the Kenya Ceramic Jiko (KCJ) charcoal stove is an example of an improved cookstove that has seen wide distribution on a commercial basis, with approximately 2 million stoves in use as of 2002 (Ministry of Energy, 2002). The KCJ was originally developed with substantial NGO funding in the early 1980s but over time has made the leap to commercial sustainability (Hyman, 1986, Hyman, 1987, Bailis et al., 2009 and Kammen, 2001). The emphasis on commercially sustainable solutions also reflects a broader shift in the conventional wisdom on how to improve the welfare of the poor, with donors focusing on catalyzing markets rather than providing indefinite support (Bailis et al., 2009). In this context, a hybrid model of a “social enterprise”, which attempts to blend a commercial approach in operations with relaxed requirements on returns in order to fulfill a social need, is increasingly being used (Borzaga and Defourny, 2001). Though the exact definition of a “social enterprise” is often left vague, commercial or semi-commercial operations offer the potential in theory of being both more scalable and more sustainable than fully subsidized efforts because they develop viable supply chains and customer-responsive business models rather than relying on centralized distribution mechanisms and ongoing funding support. Recently, organizations aiming to sell cookstoves commercially have emerged around the world, with operations in Latin America, Africa, South Asia, and the Asia Pacific region. However, there are few demonstrations thus far of self-sustaining commercial distribution of improved stoves, and there is a need to assess what would make commercial cookstove programs successful. As part of a larger study directed toward this need, this paper focuses on commercial cookstove companies in India, given that India has been a focal area for commercial cookstove operations. Reasons include its large population centers, relatively supportive and stable policy environment, comparatively well-developed infrastructure, and rapid economic growth. In particular, India offers a large potential market for improved stoves—approximately 75–100 million households (Venkataraman et al., 2010).3 An assessment of commercial approaches in India is especially timely as the Indian government considers various approaches for its newest biomass cookstove initiative (Venkataraman et al., 2010). Several fledgling efforts now exist to serve the Indian market on a commercial basis. The two companies that have achieved the largest market penetration had sold approximately 450,000 and 120,000 stoves, at the time of the June 2010 interviews on which this paper is primarily based.4 The goal of this paper is to perform an initial assessment of the progress of these and other commercial stove distribution efforts in India in order to extract broader insights into the conditions under which commercial business models for cookstove distribution might be able to overcome the obstacles to cookstove diffusion. We note that few of the efforts in India are at a sufficiently advanced stage to conclusively evaluate their performance. However, many of them have been in operation for long enough that their experiences thus far offer preliminary indications of the key factors that affect the ability both to achieve scale in improved stove sales and to be self-sustaining.5