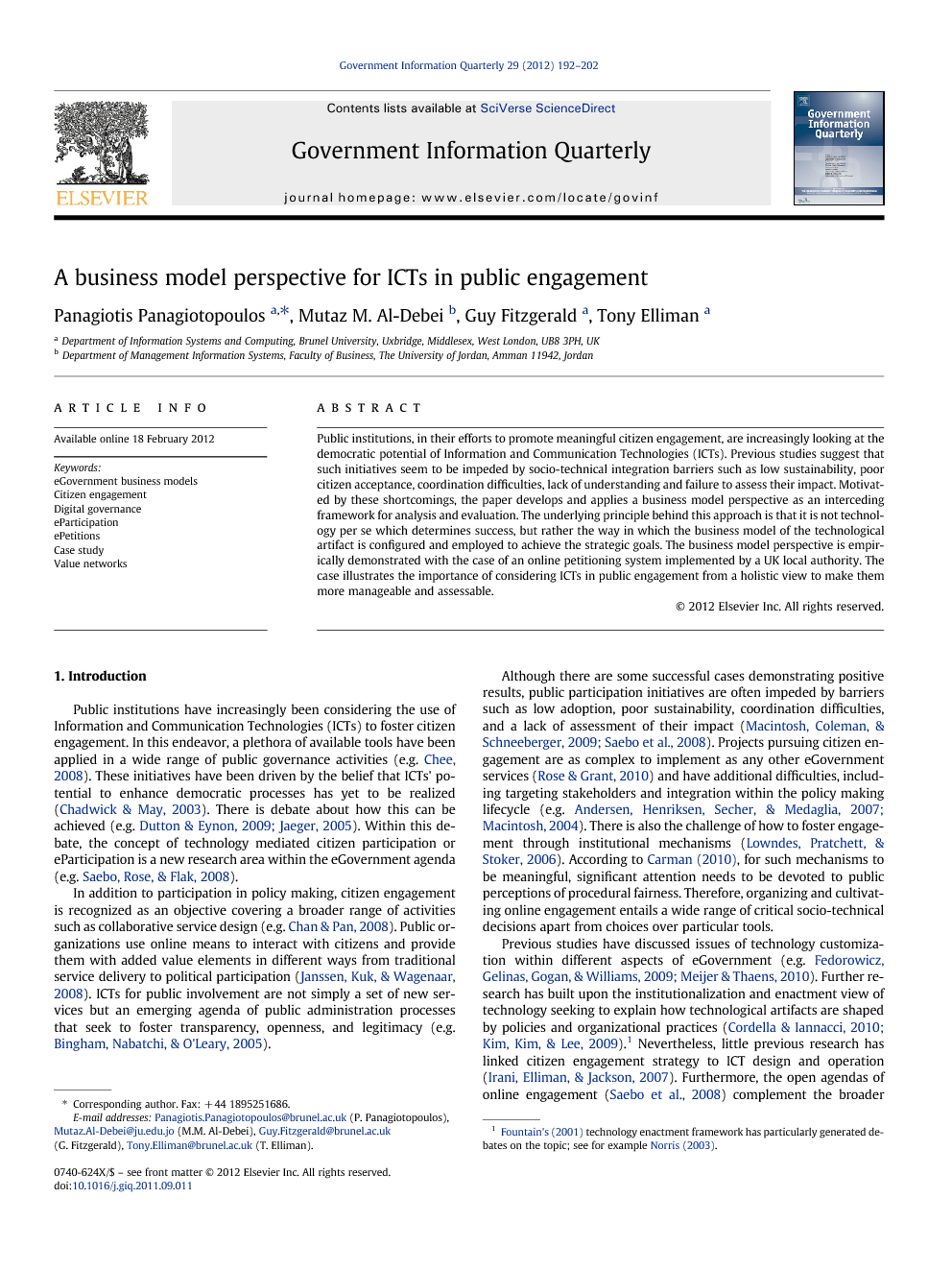 Public institutions, in their efforts to promote meaningful citizen engagement, are increasingly looking at the democratic potential of Information and Communication Technologies (ICTs). Previous studies suggest that such initiatives seem to be impeded by socio-technical integration barriers such as low sustainability, poor citizen acceptance, coordination difficulties, lack of understanding and failure to assess their impact. Motivated by these shortcomings, the paper develops and applies a business model perspective as an interceding framework for analysis and evaluation. The underlying principle behind this approach is that it is not technology per se which determines success, but rather the way in which the business model of the technological artifact is configured and employed to achieve the strategic goals. The business model perspective is empirically demonstrated with the case of an online petitioning system implemented by a UK local authority. The case illustrates the importance of considering ICTs in public engagement from a holistic view to make them more manageable and assessable.

Public institutions have increasingly been considering the use of Information and Communication Technologies (ICTs) to foster citizen engagement. In this endeavor, a plethora of available tools have been applied in a wide range of public governance activities (e.g. Chee, 2008). These initiatives have been driven by the belief that ICTs' potential to enhance democratic processes has yet to be realized (Chadwick & May, 2003). There is debate about how this can be achieved (e.g. Dutton and Eynon, 2009 and Jaeger, 2005). Within this debate, the concept of technology mediated citizen participation or eParticipation is a new research area within the eGovernment agenda (e.g. Saebo, Rose, & Flak, 2008). In addition to participation in policy making, citizen engagement is recognized as an objective covering a broader range of activities such as collaborative service design (e.g. Chan & Pan, 2008). Public organizations use online means to interact with citizens and provide them with added value elements in different ways from traditional service delivery to political participation (Janssen, Kuk, & Wagenaar, 2008). ICTs for public involvement are not simply a set of new services but an emerging agenda of public administration processes that seek to foster transparency, openness, and legitimacy (e.g. Bingham, Nabatchi, & O'Leary, 2005). Although there are some successful cases demonstrating positive results, public participation initiatives are often impeded by barriers such as low adoption, poor sustainability, coordination difficulties, and a lack of assessment of their impact (Macintosh et al., 2009 and Saebo et al., 2008). Projects pursuing citizen engagement are as complex to implement as any other eGovernment services (Rose & Grant, 2010) and have additional difficulties, including targeting stakeholders and integration within the policy making lifecycle (e.g. Andersen et al., 2007 and Macintosh, 2004). There is also the challenge of how to foster engagement through institutional mechanisms (Lowndes, Pratchett, & Stoker, 2006). According to Carman (2010), for such mechanisms to be meaningful, significant attention needs to be devoted to public perceptions of procedural fairness. Therefore, organizing and cultivating online engagement entails a wide range of critical socio-technical decisions apart from choices over particular tools. Previous studies have discussed issues of technology customization within different aspects of eGovernment (e.g. Fedorowicz et al., 2009 and Meijer and Thaens, 2010). Further research has built upon the institutionalization and enactment view of technology seeking to explain how technological artifacts are shaped by policies and organizational practices (Cordella and Iannacci, 2010 and Kim et al., 2009).1 Nevertheless, little previous research has linked citizen engagement strategy to ICT design and operation (Irani, Elliman, & Jackson, 2007). Furthermore, the open agendas of online engagement (Saebo et al., 2008) complement the broader call by Yildiz (2007) for new eGovernment theoretical approaches to enhance our understanding of policies and actors within complex public sector environments. Indeed, the rapid pragmatic evolution of online interactions fails to make clear or coherent their underlying logic. Importantly, this chaotic appearance has sometimes resulted in them being ignored in public sector organizations. This paper explores the business model (BM) concept, with its power to link theory and practice, as an approach to create opportunities and foster sustainability in public sector technological initiatives. The underlying principle behind the BM concept is that it is not technology per se which can determine success, but rather the way in which the BM of technological artifact is configured so that strategic objectives can be achieved and aligned with practice. The BM concept represents a holistic view useful for connecting internal structure and functions with the external environment and associated interactions. It has been described as an “abstract representation” (Al-Debei & Avison, 2010), a “logical story” (Magretta, 2002), or a “blueprint” (Chesbrough & Rosenbloom, 2002). For this study, we draw from the unified framework of the BM concept developed by Al-Debei and Avison (2010). We explore its main components within the public sector and particularly examine how BM thinking can enhance the use of ICTs in public engagement. On this basis, a context-specific BM framework is developed which is then empirically applied using the case of an online petitioning system developed by a UK local authority. The practical implications suggest that policy makers can benefit from BMs in order to plan and evaluate manageable institutional mechanisms that will improve the impact of digital governance initiatives. The rest of this paper is structured as follows. First, Section 2 introduces the business model perspective with respect to eGovernment research and reviews its four dimensions. Section 3 states the research approach adopted for the case study in Section 4, along with the analysis using the business model as a theoretical lens. Section 5 presents reflections and implications of this study, and Section 6 summarizes and develops issues for future research.

In this paper, the BM perspective was explored as a theoretical lens to understand, analyze, and stimulate ways of thinking on the use of ICTs in public engagement. For this purpose, we drew from the Al-Debei and Avison (2010) integrative framework of the BM concept and developed a context-specific framework. The case of Kingston's ePetitions was presented to illustrate the potential of BMs and BM thinking by providing a notable empirical example of online engagement tools. The study suggests that BM thinking, as a view on technological initiatives, can be beneficial to organize and evaluate the impact of digital governance activities. This paper addressed the call to conduct in-depth studies which capture elements that compose BMs (Janssen et al., 2008). The integrative BM framework adopted here provides a good start to unite the analytical dimensions proposed by Janssen and Kuk, 2007 and Janssen and Kuk, 2008. Additionally, the motivation was to increase consensus over public sector BM elements and make it less independent of taxonomies which might change over time. The BM principle of technological artifacts being configured to achieve strategic goals is in line with previous approaches in eGovernment research. Similar to the enactment view of technology, the BM concept emphasizes the ways in which strategies and structures enable technological characteristics to become part of functions and operations (Cordella and Iannacci, 2010 and Fountain, 2001). Complementary, BMs describe and communicate the transition between policies and their operationalization details. This study has three main limitations. The first comes from the fact that the single case examined is in some of its aspects exceptional and in any case constrained by the UK local government context. The second relates to the BM framework's general applicability. Regardless of the context-specific model developed in Fig. 1, whether such a generic framework is optimal for organizations across different hierarchies remains an open one. The third limitation comes from the fact that our study, despite certain positive indications, does not entail systematic evaluation of citizens' views on the ePetitioning initiative. As a result, there is limited knowledge on how the intended BM elements were actually communicated to citizens. One interesting direction for future research is validating and focusing the BM framework across different technological and socio-political settings. The framework remains generic enough to be useful and inclusive of ICT-enabled engagement efforts. Starting from this framework, depending on particular tools and context, more specific models can be built. For example, this can relate to different levels of context (e.g. national) or to historical studies of how BMs evolved dynamically stimulated by changes in technologies or institutional structures. Another interesting direction might be to exploit BM thinking in assessing citizens' responses and expectations regarding participation. This assessment could more comprehensively link the impact of BM design with citizen acceptance by examining the benefits that citizens perceive, as well as their understanding of engagement processes. Such examinations can be complemented by overview research that uses elements of BM thinking to survey the adoption of particular characteristics behind digital governance initiatives; Janssen et al. (2008) also point to this direction in their more broad survey of eGovernment BMs in the Netherlands. Finally it should be noted that, although this paper focuses on the citizen participation aspects of eGovernment research, the conclusions could potentially be extendable beyond this domain. Studies of emerging public sector BMs can be undertaken on recent eGovernment initiatives to facilitate the establishment of closer links between theory and practice. Moreover, the BM concept can be relevant for other institutional actors such as political parties, trade unions, or other communities which face similar challenges in their online interactions.