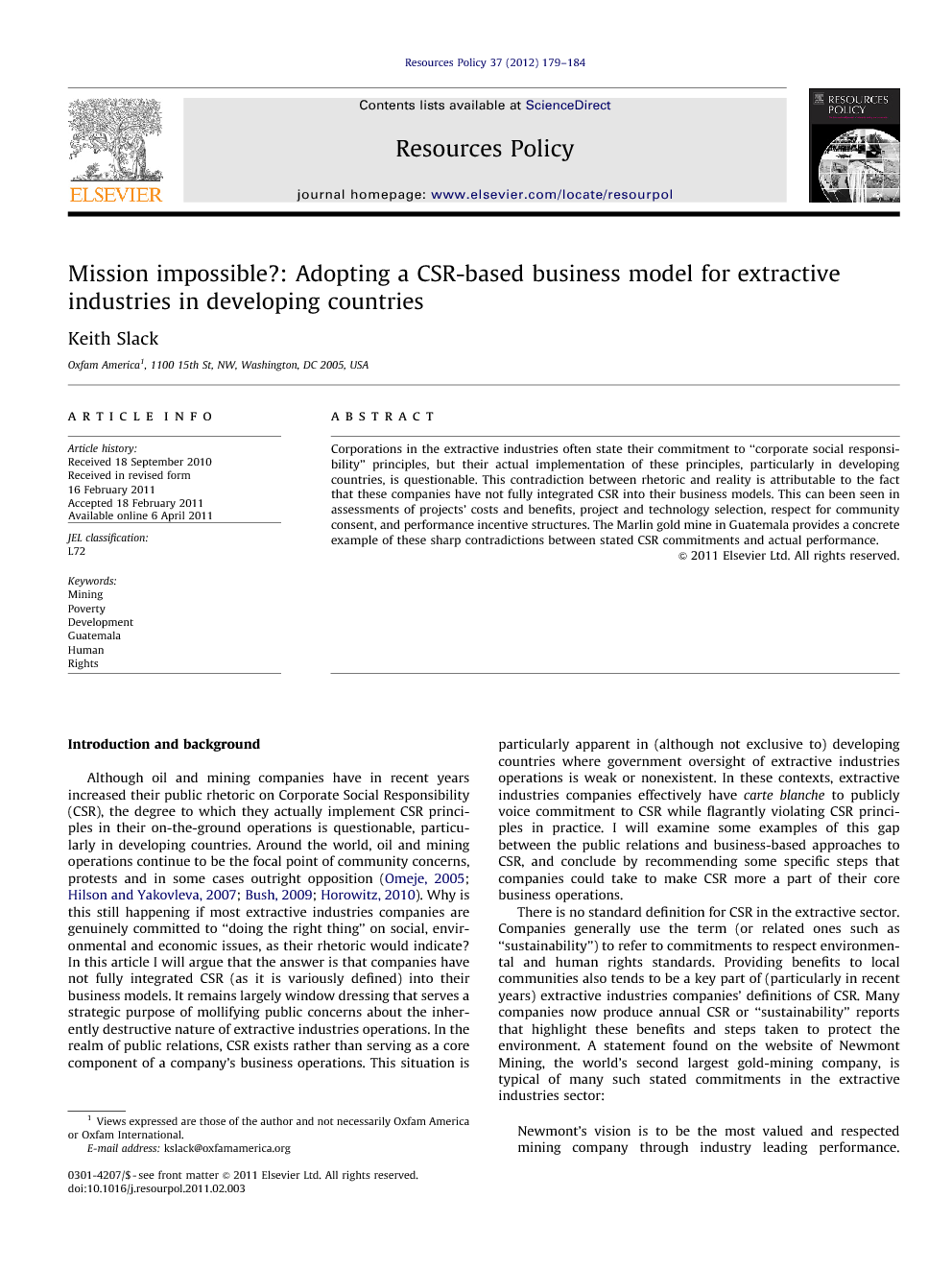 Corporations in the extractive industries often state their commitment to “corporate social responsibility” principles, but their actual implementation of these principles, particularly in developing countries, is questionable. This contradiction between rhetoric and reality is attributable to the fact that these companies have not fully integrated CSR into their business models. This can been seen in assessments of projects' costs and benefits, project and technology selection, respect for community consent, and performance incentive structures. The Marlin gold mine in Guatemala provides a concrete example of these sharp contradictions between stated CSR commitments and actual performance.

Although oil and mining companies have in recent years increased their public rhetoric on Corporate Social Responsibility (CSR), the degree to which they actually implement CSR principles in their on-the-ground operations is questionable, particularly in developing countries. Around the world, oil and mining operations continue to be the focal point of community concerns, protests and in some cases outright opposition (Omeje, 2005; Hilson and Yakovleva, 2007; Bush, 2009; Horowitz, 2010). Why is this still happening if most extractive industries companies are genuinely committed to “doing the right thing” on social, environmental and economic issues, as their rhetoric would indicate? In this article I will argue that the answer is that companies have not fully integrated CSR (as it is variously defined) into their business models. It remains largely window dressing that serves a strategic purpose of mollifying public concerns about the inherently destructive nature of extractive industries operations. In the realm of public relations, CSR exists rather than serving as a core component of a company's business operations. This situation is particularly apparent in (although not exclusive to) developing countries where government oversight of extractive industries operations is weak or nonexistent. In these contexts, extractive industries companies effectively have carte blanche to publicly voice commitment to CSR while flagrantly violating CSR principles in practice. I will examine some examples of this gap between the public relations and business-based approaches to CSR, and conclude by recommending some specific steps that companies could take to make CSR more a part of their core business operations. There is no standard definition for CSR in the extractive sector. Companies generally use the term (or related ones such as “sustainability”) to refer to commitments to respect environmental and human rights standards. Providing benefits to local communities also tends to be a key part of (particularly in recent years) extractive industries companies' definitions of CSR. Many companies now produce annual CSR or “sustainability” reports that highlight these benefits and steps taken to protect the environment. A statement found on the website of Newmont Mining, the world's second largest gold-mining company, is typical of many such stated commitments in the extractive industries sector: Newmont's vision is to be the most valued and respected mining company through industry leading performance. Key to achieving that vision is our ability to make a lasting and positive contribution toward sustainable development through environmental stewardship, social responsibility, and the protection of the health and well-being of our people (Newmont Mining Corporation, 2010). Industry associations like the International Council on Mining and Metals and the International Petroleum Industry Environmental Conservation Association have also done extensive work to define CSR elements for their respective industries. Multilateral institutions like the International Finance Corporation, the private sector arm of the World Bank, have an array of CSR-related performance standards that they expect their corporate clients to uphold. A collection of private banks, including Citigroup, Barclays and the Royal Bank of Scotland, that provide capital to extractive industries companies have adopted most of IFC's standards in an initiative known as the “Equator Principles” (Equator Principles, 2010). Likewise, global CSR initiatives relating to extractive industries have emerged in recent years. Most notable among these are the Voluntary Principles on Security and Human Rights (Voluntary Principles, 2010), in which oil and mining companies commit to human rights standards for their security operations, and the Extractive Industries Transparency Initiative (Extractive Industries Transparency Initiative, 2010), in which companies agree to voluntary disclose their payments to national governments. Participation in, or support for the principles of, the Voluntary Principles and the EITI have become important touchstones in the extractive sector for demonstrating corporate support for CSR (Hilson and Maconachie, 2009, Kostad and Wiig, 2009 and Haufler, 2010). Additionally, a number of organizations, law firms and consultancies have emerged to advise extractive industries corporations on CSR issues. Among these is Business for Social Responsibility, which works in a range of corporate sectors, and has been involved in a number of high-profile extractive projects in recent years (Business for Social Responsibility, 2010). Several large international NGOs, such as Pact, CARE and Conservation International, receive funding from major extractive companies to implement community development or environmental protection projects around oil and mining operations. Companies cite such projects as evidence of their commitment to CSR. Thus, what could be called the CSR “rhetorical infrastructure” in the extractive sectors is vast and well-established. In part, this reflects companies' public relations strategies. It costs companies little or nothing to voice support for CSR principles, and doing so can reap tangible benefits, such as access to capital (via multilateral or bilateral lending institutions or banks that endorse The Equator Principles). This also reflects pressure from community groups and NGOs who have successfully tarnished the public image of extractive companies and pressured companies to improve social and environmental performance. The array of corporate CSR rhetoric, multilateral initiatives, and partnerships, however, has failed to allay real and in some cases growing concerns and opposition to extractive activity in developing countries. In recent years, local communities in Latin America, Africa and Asia have protested and in some cases opposed outright EI operations. Some protests have been met with violent suppression by police and security forces as in Guatemala, Peru, Nigeria and Indonesia (Haarstad and Floysand, 2007, Bebbington et al., 2008 and Obi, 2010). Of course, not all of the concerns and opposition to extractive activity are directly attributable to specific activities of extractive companies. Some grievances are deep-rooted and have historical or cultural origins that pre-date the entrance of extractive activity into a community (Idemudia, 2007). Nevertheless, the existence of these conflicts and opposition despite of the extensive rhetorical commitment to CSR by extractive companies (arguably the most extensive of any corporate sector) does present a paradox. Why has the CSR rhetoric not contributed to a marked reduction in conflict around extractive industries? Why do companies not get more credit for these commitments from affected communities? The explanation lies in the nature of large-scale resource extraction itself, and the degree to which corporations move beyond CSR rhetoric towards actual integration of CSR into their ways of operating.

The Guatemala case above provides examples of the “rhetoric vs. reality” contradictions around CSR that are all too common in the extractive industries sector. This is particularly true in developing countries, although it is also evident in developed countries, as BP's recent disaster in the Gulf of Mexico amply demonstrated. The conflict and tension that the Marlin project has generated also help to demonstrate why it is important that these contradictions be reduced and that there be less disconnect between companies' stated commitment to CSR and their actually performance. Doing so will be exceedingly difficult and will require a major rethinking of corporations' business models. But these kinds of changes are not impossible. There are examples, although few, in which extractive industries companies do enjoy relatively harmonious relations with affected communities. One such case is the Tintaya mining project in Peru, in which the mining company committed itself to a truly participatory and respectful process of dialog to resolve long-standing community concerns (De Echave et al., 2005). This has contributed to the community's support for the project and relatively little conflict, unlike many other extractive projects in that country (Slack, 2009). Systemic change is never easy. The extractive sector will be under intense pressure from investors, governments and other interested parties to continue business as usual. However, if these industries are to remain viable as they face increased public scrutiny in an era of growing natural resource scarcity, they will have no choice but to implement in a more rigorous and operational way their rhetorical commitment to CSR.