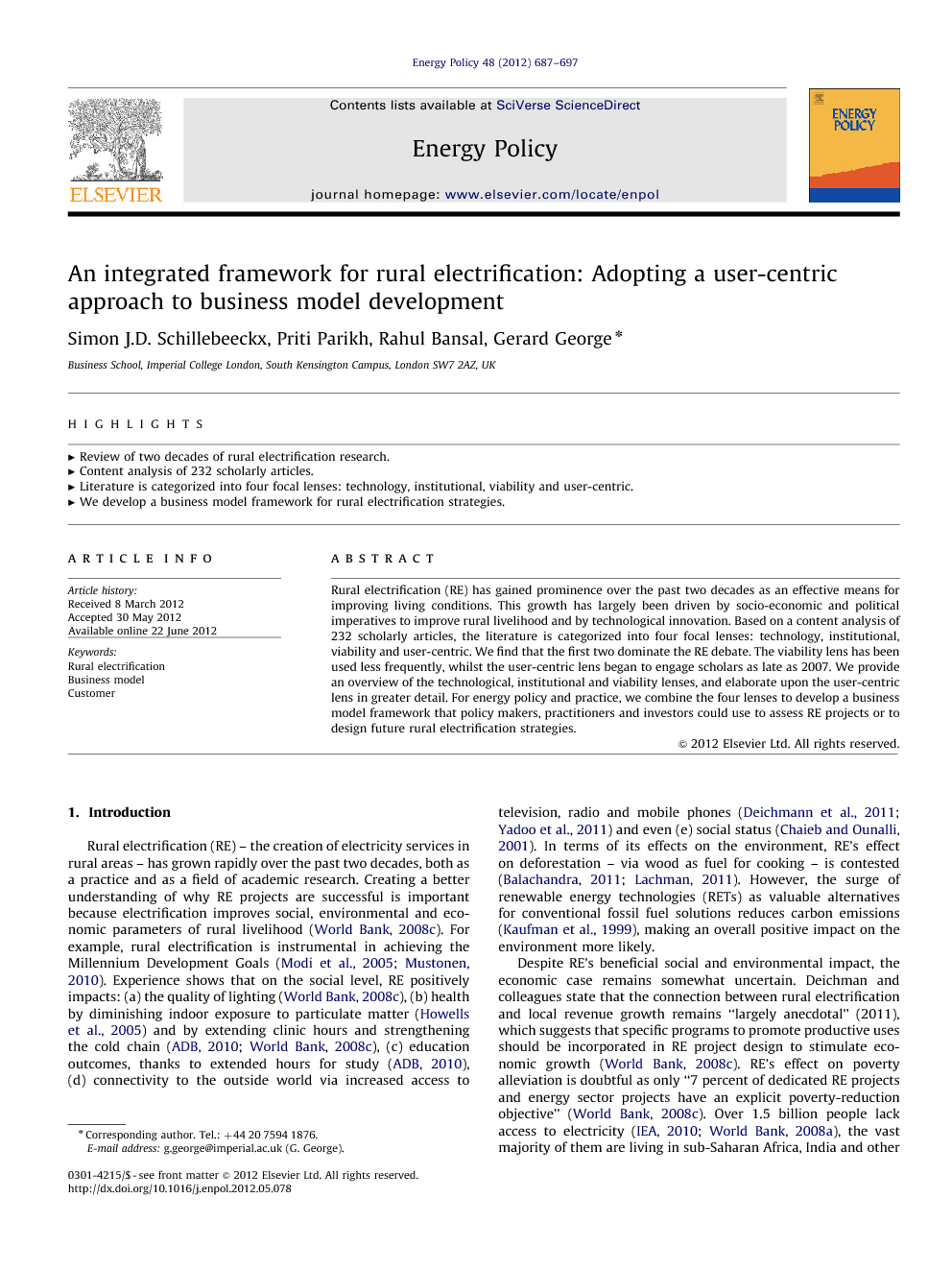 Rural electrification (RE) has gained prominence over the past two decades as an effective means for improving living conditions. This growth has largely been driven by socio-economic and political imperatives to improve rural livelihood and by technological innovation. Based on a content analysis of 232 scholarly articles, the literature is categorized into four focal lenses: technology, institutional, viability and user-centric. We find that the first two dominate the RE debate. The viability lens has been used less frequently, whilst the user-centric lens began to engage scholars as late as 2007. We provide an overview of the technological, institutional and viability lenses, and elaborate upon the user-centric lens in greater detail. For energy policy and practice, we combine the four lenses to develop a business model framework that policy makers, practitioners and investors could use to assess RE projects or to design future rural electrification strategies.

Rural electrification (RE) – the creation of electricity services in rural areas – has grown rapidly over the past two decades, both as a practice and as a field of academic research. Creating a better understanding of why RE projects are successful is important because electrification improves social, environmental and economic parameters of rural livelihood (World Bank, 2008c). For example, rural electrification is instrumental in achieving the Millennium Development Goals (Modi et al., 2005 and Mustonen, 2010). Experience shows that on the social level, RE positively impacts: (a) the quality of lighting (World Bank, 2008c), (b) health by diminishing indoor exposure to particulate matter (Howells et al., 2005) and by extending clinic hours and strengthening the cold chain (ADB, 2010 and World Bank, 2008c), (c) education outcomes, thanks to extended hours for study (ADB, 2010), (d) connectivity to the outside world via increased access to television, radio and mobile phones (Deichmann et al., 2011 and Yadoo et al., 2011) and even (e) social status (Chaieb and Ounalli, 2001). In terms of its effects on the environment, RE's effect on deforestation – via wood as fuel for cooking – is contested (Balachandra, 2011 and Lachman, 2011). However, the surge of renewable energy technologies (RETs) as valuable alternatives for conventional fossil fuel solutions reduces carbon emissions (Kaufman et al., 1999), making an overall positive impact on the environment more likely. Despite RE’s beneficial social and environmental impact, the economic case remains somewhat uncertain. Deichman and colleagues state that the connection between rural electrification and local revenue growth remains “largely anecdotal” (2011), which suggests that specific programs to promote productive uses should be incorporated in RE project design to stimulate economic growth (World Bank, 2008c). RE's effect on poverty alleviation is doubtful as only “7 percent of dedicated RE projects and energy sector projects have an explicit poverty-reduction objective” (World Bank, 2008c). Over 1.5 billion people lack access to electricity (IEA, 2010 and World Bank, 2008a), the vast majority of them are living in sub-Saharan Africa, India and other developing countries whose population growth rates exceed electrification rates (Barnes and Foley, 2001 and IEA, 2010). Consequently, future RE policies, technologies, and strategies could potentially affect a significant base of the pyramid market. The academic literature on rural electrification is largely populated with country-based approaches which focus on the implementation, problems and outcomes of a project (e.g., Gaunt, 2005, Ghosh et al., 2004 and Langevine, 1996) or address the local potential for electrification (e.g., Gulberg et al., 2005, Rabah, 2005 and Stutenbäumer et al., 1999). Various studies exclusively discuss aspects of certain technologies (e.g., Krauter and Ochs, 2004, Lubis and Udin, 1991 and Munro and Blaesser, 1994) while others focus chiefly on policy and institutional issues (Bond et al., 2007 and Ketlogetswe et al., 2006). Comparative studies that analyze different technologies (ARE, 2010), investigate the impact of policy reforms across different countries (Moonga Haanyika, 2006) or try to unpack the drivers of success in the context of particular case studies (Miller and Hope, 2000 and Zerriffi, 2007), prove very insightful, but remain rather rare. Although in-depth technological and country-specific research have great value, multifocal research across technological, institutional and financial boundaries is more likely to overcome the general failure to capitalize on past success and generate “a replicable model for rural electrification” (Zerriffi, 2007). This article attempts to build such an integrated ‘replicable model' by linking four focal lenses – technology, institutional, viability and user-centric – that are generally used separately to discuss RE projects. Interlinking these four lenses provides a powerful way of thinking about the building blocks of project or organizational success, as demonstrated by the literature on business models (Afuah, 2001, Amit and Zott, 2001 and George and Bock, 2011). Our goal is not to provide a single recipe for RE. Instead, we highlight the building blocks of an integrated framework for design and/or assessment of RE projects. By using the business model logic to analyze RE projects, we build on a young tradition that applies business model thinking to address social and environmental issues (George et al., 2012, Jenkins, 2009, Schillebeeckx, 2011 and Seelos and Mair, 2005). In the following sections, we describe the methodology used to assess the literature and report our findings. We deduce and discuss four focal lenses: technology, institutional, viability and user-centric. The user-centric lens is developed in greater detail than the other three because we believe a better understanding of the underlying ‘user' needs is fundamental to increasing the economic success rate of RE projects. Yet, such an approach has, until recently, been largely absent from the literature on RE. Finally, we develop a generic business model checklist that could act as a framework for practitioners to develop a toolkit that can help turn this sustainability challenge into a business opportunity.

Thus far, we have drawn insights from the various lenses used to discuss RE projects. Our content analysis of 232 papers showed a clear dominance of technology and institutional lenses while highlighting a much smaller incidence of viability and user-centric lenses. This finding shows that less attention has been paid to understanding user needs and revenue models than to understanding technology and institutional contexts. While our exploration of the viability lens has been brief, we have highlighted the importance of the subsidy-commercial continuum and explicitly incorporated the time dimension. We recommend including a post-project plan for after the subsidization period to increase the likelihood of self-sufficiency and long-term viability. Our conceptualization of the user-centric lens underlines the importance of affordability, reliability and local embeddedness for project uptake and diffusion of RETs. Our final step is to collate these four lenses to create an integrated business model toolkit for RE projects. We have used business model thinking in a new context that does not focus on a single business but on cooperative projects between various partners, without an obvious profit-orientation and with a socially responsible endgame. While this context is novel, we follow Zott et al. (2011) in our emphasis on a holistic approach, our focus on systemic perspectives and our exploration of the value-creating, beyond mere value-capturing, potential of the business models involved. The important lesson is that in RE projects, the whole is more than the sum of the parts. By integrating the four lenses into a coherent framework, represented by the toolkit in Table 3, we stress the importance of understanding the links between the choices that need be made both in design and assessment of RE projects. As suggested by George and Bock (2012), often it is the coherence of the business model narrative that determines the difference between success and failure. Without integration of the various lenses, the construction of a coherent RE narrative seems almost impossible. We believe that a better understanding of users and more community-involvement is likely to increase long-term sustainability of RE projects, thereby increasing the effect of limited governmental resources. Our proposed business model toolkit not only provides a powerful summary to the paper but also provides policy makers, practitioners and investors with a checklist of pre-requisites for a sustainable and viable rural electrification project Table 3. Although our toolkit focuses specifically on RE, it could be interesting to see whether it could be applied to other forms of infrastructure, such as water, transportation, or even healthcare. The technology lens would clearly have to be adapted, but the other three might prove to be more generic than initially intended. In a similar vein, our approach of using business model thinking to explore project-based cooperations opens up new research avenues. While business model thinking has to this point been largely confined to the world of firms, a consortium-approach to business models provides new challenges for future research. The cooperation of corporate, non-governmental and governmental actors in a single project makes the development of a coherent business model and according narrative very challenging. Nonetheless, these cooperative endeavors are fundamental to the success of RE projects and many other projects in the fields of sustainable development. It is only through consortia that the necessary resources and capabilities can be effectively brought to bear on the social ills that are being faced at the bottom of the pyramid. With a market expected to grow to 3.5 billion in the foreseeable future, the potential for creating radically innovative business models built on cooperation is great. We hope our paper can make a contribution to tackling this important challenge.