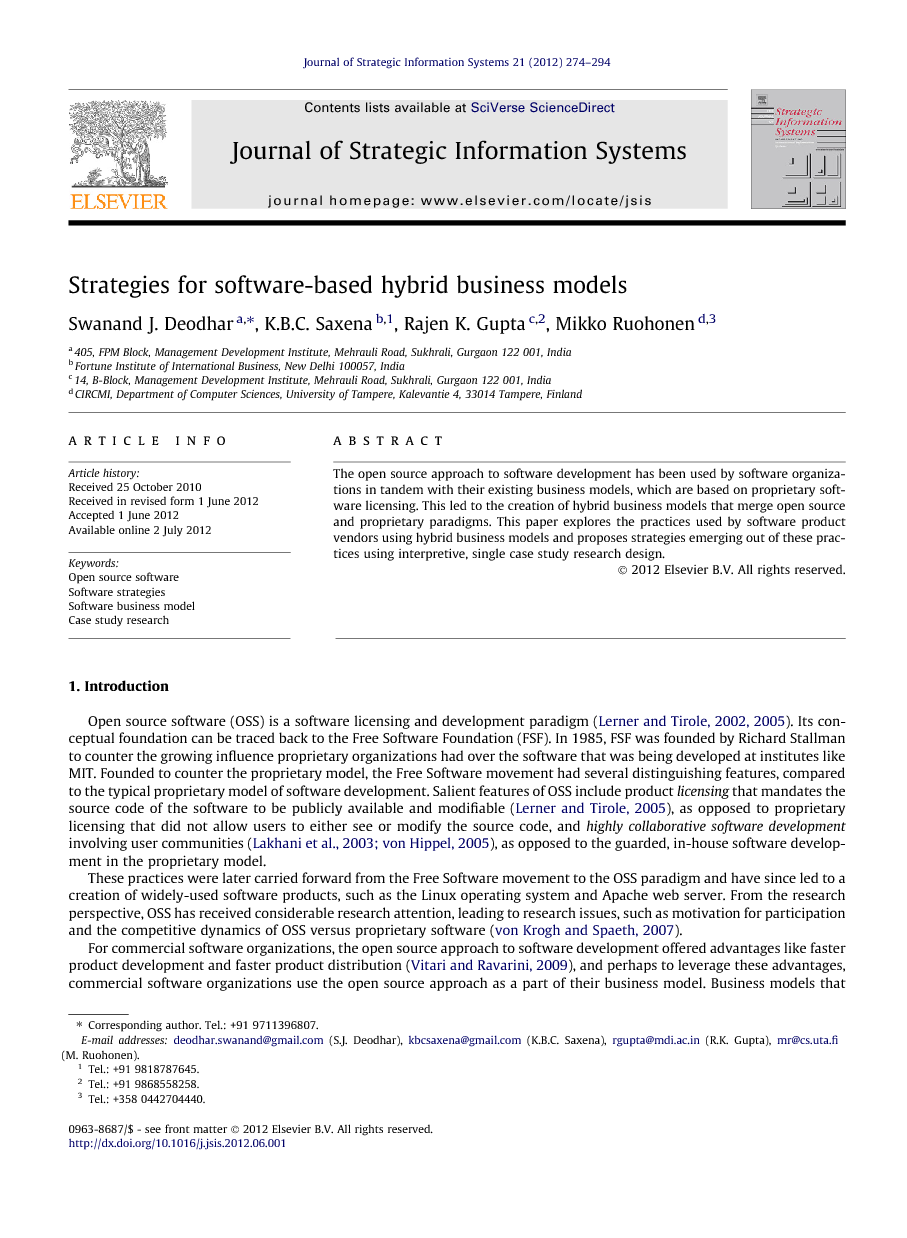 Open source software (OSS) is a software licensing and development paradigm (Lerner and Tirole, 2002 and Lerner and Tirole, 2005). Its conceptual foundation can be traced back to the Free Software Foundation (FSF). In 1985, FSF was founded by Richard Stallman to counter the growing influence proprietary organizations had over the software that was being developed at institutes like MIT. Founded to counter the proprietary model, the Free Software movement had several distinguishing features, compared to the typical proprietary model of software development. Salient features of OSS include product licensing that mandates the source code of the software to be publicly available and modifiable (Lerner and Tirole, 2005), as opposed to proprietary licensing that did not allow users to either see or modify the source code, and highly collaborative software development involving user communities ( Lakhani et al., 2003 and von Hippel, 2005), as opposed to the guarded, in-house software development in the proprietary model. These practices were later carried forward from the Free Software movement to the OSS paradigm and have since led to a creation of widely-used software products, such as the Linux operating system and Apache web server. From the research perspective, OSS has received considerable research attention, leading to research issues, such as motivation for participation and the competitive dynamics of OSS versus proprietary software (von Krogh and Spaeth, 2007). For commercial software organizations, the open source approach to software development offered advantages like faster product development and faster product distribution (Vitari and Ravarini, 2009), and perhaps to leverage these advantages, commercial software organizations use the open source approach as a part of their business model. Business models that integrate the open source approach with the traditional proprietary software business model are called hybrid business models in the literature (Bonaccorsi et al., 2006). Since its conceptualization by Mahadevan (2000), the idea of the business model has been examined through numerous frameworks (Morris et al., 2005). Although there is no well-accepted definition of the term business model (Hedman and Kalling, 2003), it is understood to represent a map of activities that link value creation, value delivery, and revenue generation. Thus, in order to understand the business model of a firm, it is important to understand these interrelated activities. Organizational research is full of concepts that talk about an organization’s operations. For example, organizational process refers to an interrelated set of activities that are coordinated to achieve a certain goal. However, business models are highly contextualized to particular organizational settings because, in addition to activities, business models interface with the people and other resources. Hence, it is important to view the underlying activities by keeping the context of their execution intact. Organizational practice is one of the useful theoretical perspectives that can link the activities or actions of a business to its existence (Kostova and Roth, 2002). Organizational practices are defined as an organization’s routine use of knowledge for conducting a particular function that has evolved over time under the influence of the organization’s history, people, interests, and actions. Perceived from the practice perspective, a general business model and a hybrid business model can be viewed as configurations of organizational practices. Consequently, it can be argued that in order to employ a hybrid business model, an organization must employ and configure the organizational practices that aid in hybridization. However, what these practices are is not known. Hence, there is a need for further exploration and elaboration ( West, 2003 and Fitzgerald, 2006). In this study, our goal is to partially address this gap through a single case study research design. The product chosen for the case study was a successful OSS product created by a commercial software organization that has a hybrid business model. The success of an OSS product implies community participation and software usage. This is in line with the existing literature on OSS product success ( Grewal et al., 2006, Stewart et al., 2006, Subramanian et al., 2009, Lee et al., 2009 and Comino et al., 2007). Through our case-based research, we report five management practices and three emergent strategies used in formulating the organization’s hybrid business model. The authors believed that the study provides a fresh conceptualization of the phenomenon at hand, and it has theoretical and practical implications for undertaking and using OSS-based hybrid business models. The paper is structured as follows: In the next section, we elaborate on the evolution of OSS from its ideological origins in Free Software to an approach for software development that can be merged with the proprietary business model. We end the section by highlighting the research gap. In the next section, we provide an explanation of the research methodology, including data collection and data analysis processes. Next, we outline the inferred management practices and strategies. The paper concludes by highlighting the contributions and limitations of the study along with future research directions.