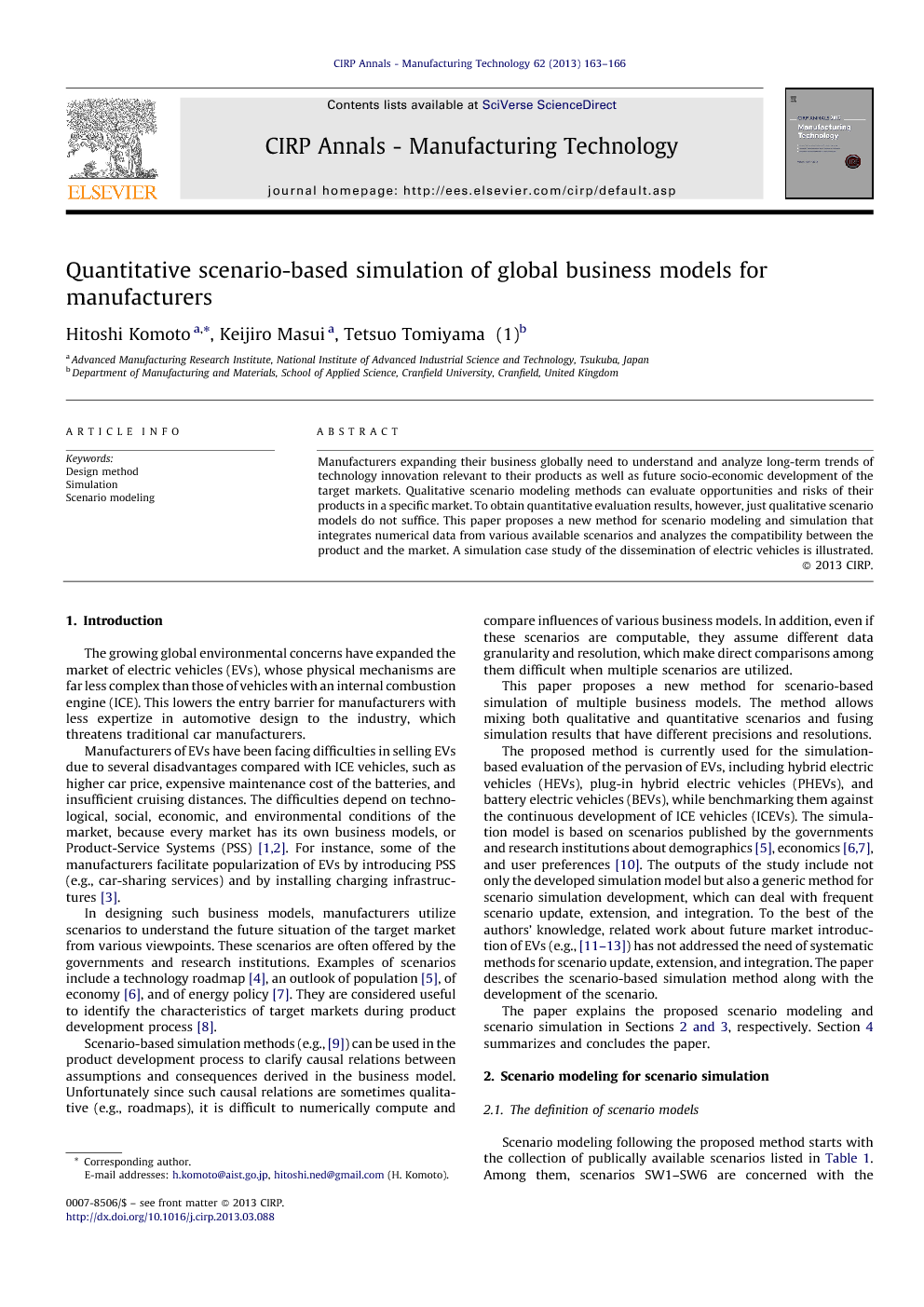 Manufacturers expanding their business globally need to understand and analyze long-term trends of technology innovation relevant to their products as well as future socio-economic development of the target markets. Qualitative scenario modeling methods can evaluate opportunities and risks of their products in a specific market. To obtain quantitative evaluation results, however, just qualitative scenario models do not suffice. This paper proposes a new method for scenario modeling and simulation that integrates numerical data from various available scenarios and analyzes the compatibility between the product and the market. A simulation case study of the dissemination of electric vehicles is illustrated.

The growing global environmental concerns have expanded the market of electric vehicles (EVs), whose physical mechanisms are far less complex than those of vehicles with an internal combustion engine (ICE). This lowers the entry barrier for manufacturers with less expertize in automotive design to the industry, which threatens traditional car manufacturers. Manufacturers of EVs have been facing difficulties in selling EVs due to several disadvantages compared with ICE vehicles, such as higher car price, expensive maintenance cost of the batteries, and insufficient cruising distances. The difficulties depend on technological, social, economic, and environmental conditions of the market, because every market has its own business models, or Product-Service Systems (PSS) [1] and [2]. For instance, some of the manufacturers facilitate popularization of EVs by introducing PSS (e.g., car-sharing services) and by installing charging infrastructures [3]. In designing such business models, manufacturers utilize scenarios to understand the future situation of the target market from various viewpoints. These scenarios are often offered by the governments and research institutions. Examples of scenarios include a technology roadmap [4], an outlook of population [5], of economy [6], and of energy policy [7]. They are considered useful to identify the characteristics of target markets during product development process [8]. Scenario-based simulation methods (e.g., [9]) can be used in the product development process to clarify causal relations between assumptions and consequences derived in the business model. Unfortunately since such causal relations are sometimes qualitative (e.g., roadmaps), it is difficult to numerically compute and compare influences of various business models. In addition, even if these scenarios are computable, they assume different data granularity and resolution, which make direct comparisons among them difficult when multiple scenarios are utilized. This paper proposes a new method for scenario-based simulation of multiple business models. The method allows mixing both qualitative and quantitative scenarios and fusing simulation results that have different precisions and resolutions. The proposed method is currently used for the simulation-based evaluation of the pervasion of EVs, including hybrid electric vehicles (HEVs), plug-in hybrid electric vehicles (PHEVs), and battery electric vehicles (BEVs), while benchmarking them against the continuous development of ICE vehicles (ICEVs). The simulation model is based on scenarios published by the governments and research institutions about demographics [5], economics [6] and [7], and user preferences [10]. The outputs of the study include not only the developed simulation model but also a generic method for scenario simulation development, which can deal with frequent scenario update, extension, and integration. To the best of the authors’ knowledge, related work about future market introduction of EVs (e.g., [11], [12] and [13]) has not addressed the need of systematic methods for scenario update, extension, and integration. The paper describes the scenario-based simulation method along with the development of the scenario. The paper explains the proposed scenario modeling and scenario simulation in Sections 2 and 3, respectively. Section 4 summarizes and concludes the paper.

This paper has proposed a method to model and simulate long-term scenarios, which can integrate the numerical data of existing scenarios defined from various aspects and resolutions. The advantages of the model description employed in the method have been observed in terms of (1) the integration of scenario models, (2) variable partitions of scenario models in order to adapt variations in the degree of simulation precision and computational costs, and (3) the definition of an indicator to quantify the compatibility among the employed numerical data. The method is novel in the following three aspects. First, simulation results of multiple scenarios that have different precision and resolution can be integrated at the level of numerical data through the analysis of common parameters defined in scenarios. Recently, the background data of scenarios (e.g., statistics information) has become increasingly available with the releases of APIs (Application Programming Interfaces). This makes it easy to carry out such an analysis; various web-based applications using such data have been developed (e.g., [19]). Second, the simulation of an integrated scenario model is conducted after partitioning the scenario model into a number of elements, each of which represents a specific region of the global market. The size of partition controls the precision and computational costs of a scenario simulation, while it is independent of the model description. The mechanism can be a comparable to mesh partition used in finite element analysis. Finally, the simulation result is evaluated by means of the compatibility between two scenario models, which describe the progress of the number of products satisfying a specific set of requirements (e.g., vehicle performances) and the number of customers, who specify the requirements. The status of the customers is defined by a set of parameters representing their product usage and economic status.