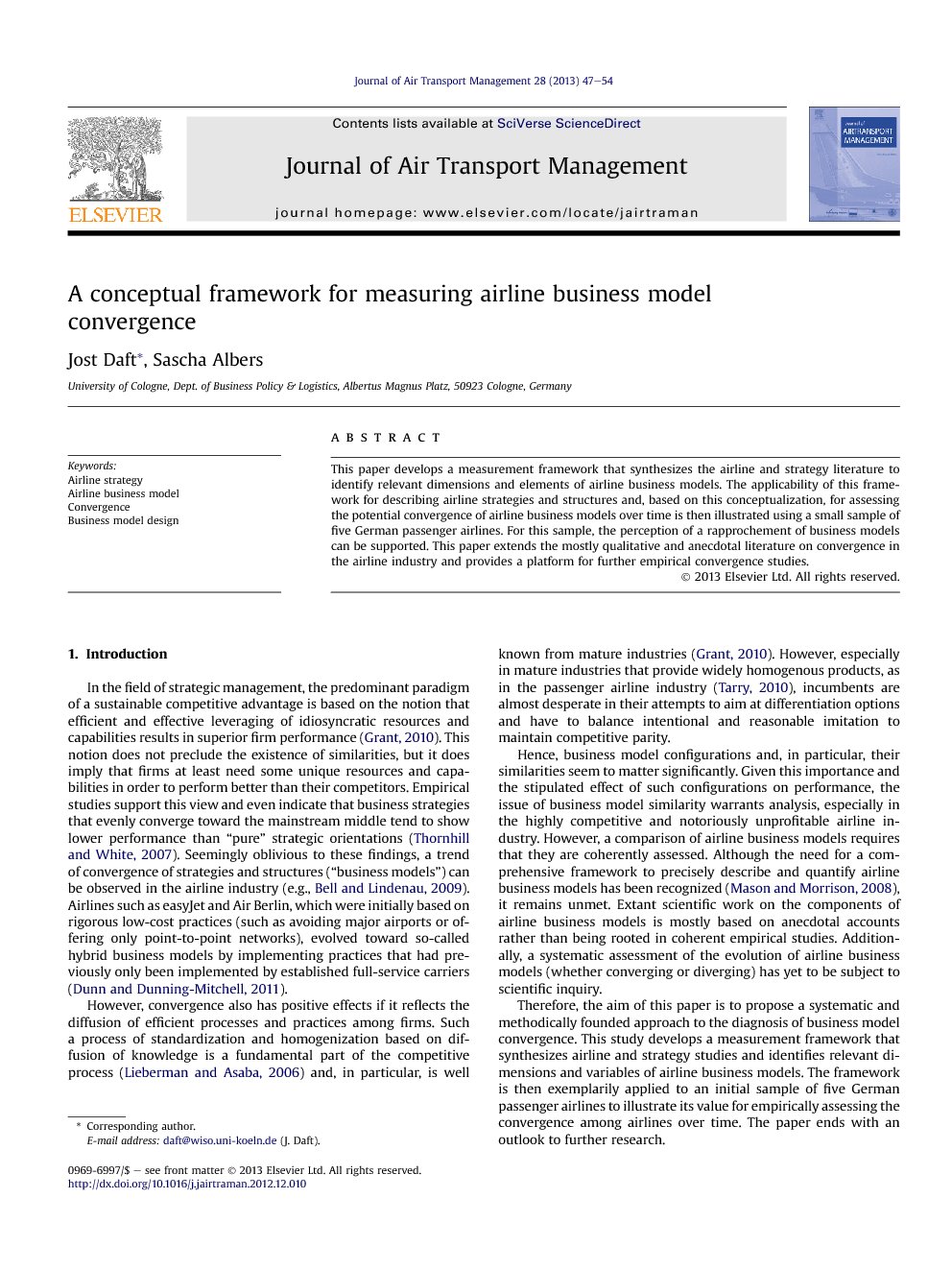 This paper develops a measurement framework that synthesizes the airline and strategy literature to identify relevant dimensions and elements of airline business models. The applicability of this framework for describing airline strategies and structures and, based on this conceptualization, for assessing the potential convergence of airline business models over time is then illustrated using a small sample of five German passenger airlines. For this sample, the perception of a rapprochement of business models can be supported. This paper extends the mostly qualitative and anecdotal literature on convergence in the airline industry and provides a platform for further empirical convergence studies.

In the field of strategic management, the predominant paradigm of a sustainable competitive advantage is based on the notion that efficient and effective leveraging of idiosyncratic resources and capabilities results in superior firm performance (Grant, 2010). This notion does not preclude the existence of similarities, but it does imply that firms at least need some unique resources and capabilities in order to perform better than their competitors. Empirical studies support this view and even indicate that business strategies that evenly converge toward the mainstream middle tend to show lower performance than “pure” strategic orientations (Thornhill and White, 2007). Seemingly oblivious to these findings, a trend of convergence of strategies and structures (“business models”) can be observed in the airline industry (e.g., Bell and Lindenau, 2009). Airlines such as easyJet and Air Berlin, which were initially based on rigorous low-cost practices (such as avoiding major airports or offering only point-to-point networks), evolved toward so-called hybrid business models by implementing practices that had previously only been implemented by established full-service carriers (Dunn and Dunning-Mitchell, 2011). However, convergence also has positive effects if it reflects the diffusion of efficient processes and practices among firms. Such a process of standardization and homogenization based on diffusion of knowledge is a fundamental part of the competitive process (Lieberman and Asaba, 2006) and, in particular, is well known from mature industries (Grant, 2010). However, especially in mature industries that provide widely homogenous products, as in the passenger airline industry (Tarry, 2010), incumbents are almost desperate in their attempts to aim at differentiation options and have to balance intentional and reasonable imitation to maintain competitive parity. Hence, business model configurations and, in particular, their similarities seem to matter significantly. Given this importance and the stipulated effect of such configurations on performance, the issue of business model similarity warrants analysis, especially in the highly competitive and notoriously unprofitable airline industry. However, a comparison of airline business models requires that they are coherently assessed. Although the need for a comprehensive framework to precisely describe and quantify airline business models has been recognized (Mason and Morrison, 2008), it remains unmet. Extant scientific work on the components of airline business models is mostly based on anecdotal accounts rather than being rooted in coherent empirical studies. Additionally, a systematic assessment of the evolution of airline business models (whether converging or diverging) has yet to be subject to scientific inquiry. Therefore, the aim of this paper is to propose a systematic and methodically founded approach to the diagnosis of business model convergence. This study develops a measurement framework that synthesizes airline and strategy studies and identifies relevant dimensions and variables of airline business models. The framework is then exemplarily applied to an initial sample of five German passenger airlines to illustrate its value for empirically assessing the convergence among airlines over time. The paper ends with an outlook to further research.

The aim of this paper was to develop a consistent measurement framework that enables a systematic assessment of airline business models. In particular, similarities among different airlines should be detectable by the framework. For this purpose, this study synthesized the airline- and strategy-related literature and developed a framework based on identified components, its composing dimensions, and the airline industry-specific item layout. The proposed framework and item layout were validated through interviews with airline industry experts. Where needed, adjustments were made to enable this study to develop a framework of three relevant components composed from a total of 40 dedicated items that most comprehensively measure airline business models. The usefulness of the derived framework was illustrated by exemplarily applying it to an initial sample of five German passenger airlines. Although the exemplary convergence analysis was based on a reduced item subset of only eleven items, a rudimentary indication of a converging trend in airline business model characteristics was possible in the German airline industry over the last eight years. These results, if confirmed across a larger sample and reinforced through similar tendencies in the remaining BM measurement items, have a strong effect on airline practitioners. By indicating that the widely assumed convergence trend is underway, airline managers are encouraged to explicitly reconsider their differentiation policies. In particular, the carriers that depart from the original, pure low-cost model by offering extended services similar to established FSC are potentially prone to lose profitability (Alamdari and Fagan, 2005). A clear differentiation among the high- and low-price-oriented airline services is key to survival in the airline industry. As an example, Qantas most recently announced a restructuring of its loss-making main line by founding a new premium carrier and, at the same time, expanding its low-cost subsidiaries. This restructuring can be seen as a move toward rethinking the differentiation policies of both LCC and FSC airlines. Yet, to derive detailed differentiation recommendations for elements of individual airline business models, the rather new topic of airline convergence analysis needs to be studied in greater detail, by both practitioners and academics. Thus, the results support the quest for a more detailed analysis of airline business models over time. By extending the research in this field, future studies should be able to answer the most important emerging question, whether forming a dominant airline business model design is observable. Moreover, future studies should analyze the effect of a growing similarity among airlines on their overall financial performance. For this purpose, future research would benefit from considering the entire item set introduced in this paper. Also, the data sample has to be extended to an international perspective that includes a variety of airlines with different backgrounds, such as former national flag carriers, new startup airlines, low-cost oriented airlines, Gulf carriers, or entrepreneur-owned airlines. By considering such a broad spectrum of airlines on a year-to-year basis, precise detailed mapping of converging or diverging trends in different periods among different airline business models is presumed possible. In particular, a consideration of annual snapshots will help indicate the rate of the developments. Thus, based on the business model framework developed in this paper, assessing whether convergence is a rather new phenomenon and whether its dispersion is or is not accelerating will be possible. Moreover, validating whether the airline business models converge toward the original FSC model or whether originally full-service-oriented airlines begin to adjust their architectural backbone according to core elements of the LCC model will be possible. This knowledge will be essential for airline managers to precisely analyze the effect on airline performance and to derive strategic recommendations to handle new challenges that might be caused by the growing similarity of airlines around the world. This paper extends the primarily qualitative and anecdotal literature on convergence in the airline industry and provides a platform for further studies in the field of empirical convergence analysis and corresponding strategic airline management research.