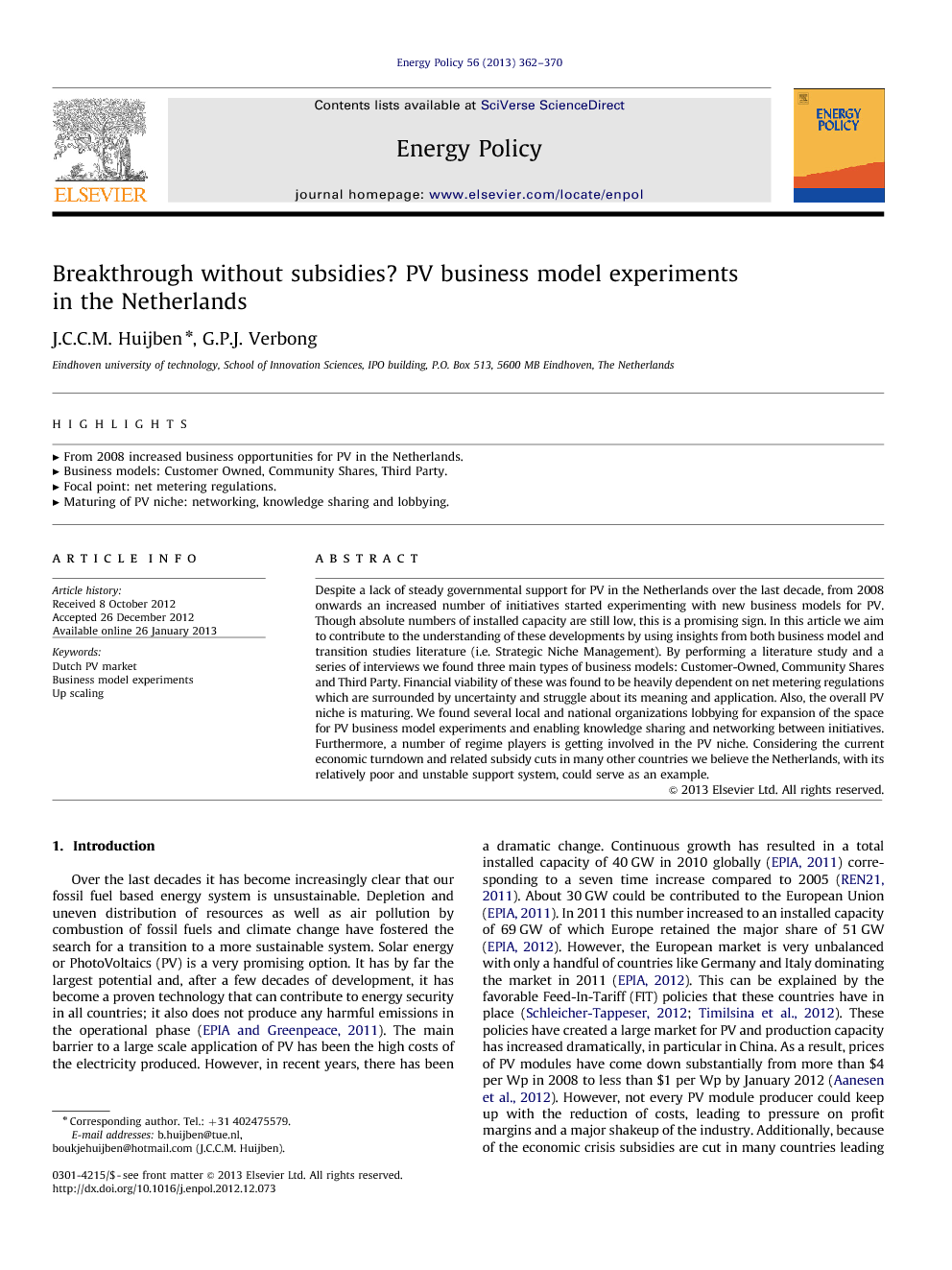 Despite a lack of steady governmental support for PV in the Netherlands over the last decade, from 2008 onwards an increased number of initiatives started experimenting with new business models for PV. Though absolute numbers of installed capacity are still low, this is a promising sign. In this article we aim to contribute to the understanding of these developments by using insights from both business model and transition studies literature (i.e. Strategic Niche Management). By performing a literature study and a series of interviews we found three main types of business models: Customer-Owned, Community Shares and Third Party. Financial viability of these was found to be heavily dependent on net metering regulations which are surrounded by uncertainty and struggle about its meaning and application. Also, the overall PV niche is maturing. We found several local and national organizations lobbying for expansion of the space for PV business model experiments and enabling knowledge sharing and networking between initiatives. Furthermore, a number of regime players is getting involved in the PV niche. Considering the current economic turndown and related subsidy cuts in many other countries we believe the Netherlands, with its relatively poor and unstable support system, could serve as an example.

Despite the poor track record in renewables in general, the Netherlands seem to catch up rapidly, at least in the field of PV. In this article, we have tried to find out what is behind the recent surge in Dutch PV initiatives. Government support in the form of subsidies is part of the explanation, but as we have argued, government policy has been very ad hoc and not consistent. The latest change in policy as part of the recent Spring Agreement is just another example. But there has been a remarkable change. Whereas in the past PV promoters regularly have demanded more support for PV, the reception of this new subsidy has been only lukewarm. The general opinion is that this instrument reduces motivation for consumers not eligible for subsidy and, more importantly, that the Dutch market does not need subsidies anymore (although many projects have applied for the subsidy). So what explains the imminent PV breakthrough in the Netherlands? First, prices of PV modules have come down substantially. Combined with relatively high electricity prices PV has become much more attractive. But the main reason has been the development of new business models. We have found these to be financially supported by both local and national governmental bodies, for example in the form of tax deductions after investment. In particular, the instrument of net metering has been crucial, because the balancing of the electricity bill offers small consumers a high reward for generating solar electricity. With every increase in the kWh price, this becomes even more attractive. Although the option of net metering has already been introduced in the 1998 Electricity Bill, this option has only recently become a key issue. There has been a lot of uncertainty about the specific conditions for application of net metering. Moreover, expansion of net metering, e.g. to include virtual net metering, has become a central issue in policy and regulation. Local governments in particular support experiments with virtual net metering based business models. Here, the link between institutional factors (regulation) and business models is very clear. With the growing success of net metering, it will likely remain a contested issue for the next couple of years. Although net metering is a key component of the explanation for the rapidly increasing number of PV-initiatives, business models also address other barriers, like the high up front investments and supplier guarantees (risks, quality). Three main business model experiment categories were found: Customer Owned, Community Shares and Third Party business models. This is in line with the three categories identified by Sauter and Watson (2007). Also, our cases show a range of options within these categories as well as overlapping business model categories. However, while Sauter and Watson only considered ‘the company’ and ‘the consumer’ in their analysis, we found different types of actors to be necessary for successful implementation of the business model, like volunteers and local governments. The majority of the initiatives focus on collective buying of solar panels. Third party business models are emerging but these are much more complex and sometimes also require changes in existing legislation. Large industrial projects are not financially viable because of the low energy taxes that have to be paid for high energy use. Finally, Community Shares business models were rarely found because of the need for regulatory changes to approve for virtual or off-site net metering. Next to a growing number of projects, also the PV niche is maturing. Several lobby organizations try to increase the space of PV business model experiments. Local governments play a prominent role, but increasingly other actors, regime players like DNOs and utilities but also actors from other fields are getting engaged in PV-activities. Additionally, several local and national organizations are supporting knowledge sharing and networking activities between the different initiatives. Also, some of the initiatives are part of a broader development towards local renewable energy companies (i.e. cooperatives). In this paper we have shown that a combined SNM-BM approach can lead to new insights in the up scaling of renewable energy technologies like PV that would not have been found with an individual SNM or BM theoretical approach. While business model literature was very helpful for analyzing the various experiments with business models that are being developed, strategic niche management turned out to be very valuable for analyzing learning processes between experiments (i.e. business model experimental pathways), broader PV niche development processes and existing regime barriers that are of direct influence on the development and up scaling of new business models. However, we consider this to be a starting point and recommend further research on the topic. Although net metering has pushed the Dutch market forward over the last years, it is not the only explanation for its rise. Under absence of additional, steady support, like in many of its neighboring countries (e.g. Belgium (Flanders)), people have become creative entrepreneurs developing new business models for PV and establishing the necessary boundary conditions for its implementation. Considering the current economic turndown and related subsidy cuts in many other countries, it would be highly valuable to consider the Dutch PV market as an example for future PV market growth.