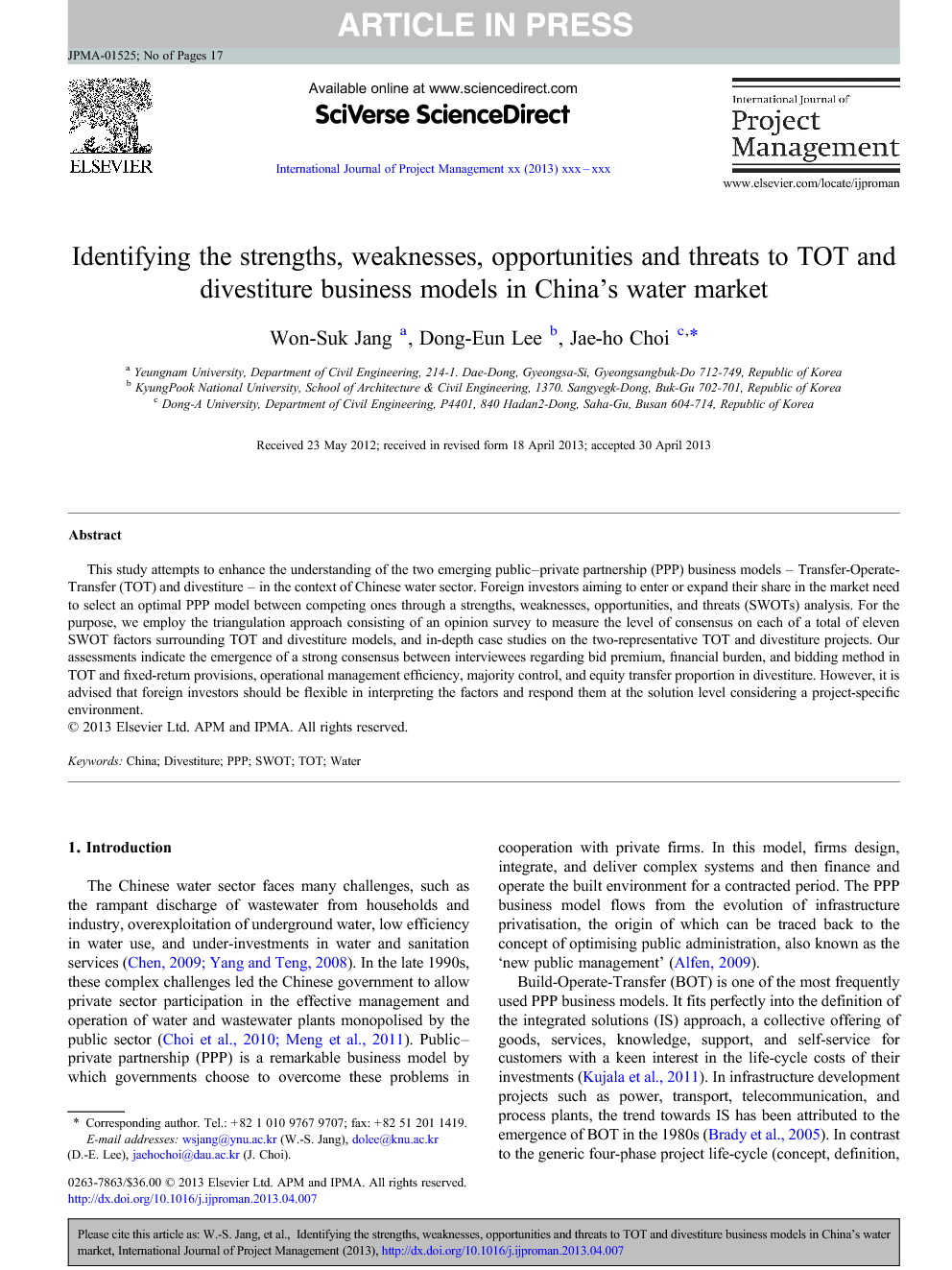 This study attempts to enhance the understanding of the two emerging public–private partnership (PPP) business models – Transfer-Operate-Transfer (TOT) and divestiture – in the context of Chinese water sector. Foreign investors aiming to enter or expand their share in the market need to select an optimal PPP model between competing ones through a strengths, weaknesses, opportunities, and threats (SWOTs) analysis. For the purpose, we employ the triangulation approach consisting of an opinion survey to measure the level of consensus on each of a total of eleven SWOT factors surrounding TOT and divestiture models, and in-depth case studies on the two-representative TOT and divestiture projects. Our assessments indicate the emergence of a strong consensus between interviewees regarding bid premium, financial burden, and bidding method in TOT and fixed-return provisions, operational management efficiency, majority control, and equity transfer proportion in divestiture. However, it is advised that foreign investors should be flexible in interpreting the factors and respond them at the solution level considering a project-specific environment.

In China, the number of PPP water projects has increased rapidly since the opening up of the entire municipal water service sector to foreign investment and that the PPP approach is a sustainable business model for China's water sector. The evolution of PPP business models is the outcome of cooperative efforts by the public and private sectors in response to continuously changing environments and market needs. Nevertheless, international scholars and market professionals have failed to add value to the current PPP literature concerning TOT and divestiture, the two emerging forms, or provide a mechanism for preventing the inherent and external project risks. From the foreign investor's point of view, they need to select an optimal PPP business model based on a complete understanding on the SWOT factors inherent in the TOT and divestiture models considering outer business environment. Although the existing business model analysis framework does not well accommodate the M&A solution approach such as divestiture involving partial or full equity transfer, the framework is useful in categorising various types of models and conceptualising them for a better understanding of their characteristics. The market strategy decides how a business model is to be utilised by examining risks and market changes, including the competition, a firm's position, and the customer's situation. However, a business model alone cannot provide a complete view of the model's applicability in a specific market segment or of strategy generation for a project-based firm. In this context, this study has conducted an opinion survey on eleven SWOT factors identified through rigorous literature reviews, followed by an in-depth analysis of the two representative case studies on water project firms in the Chinese water market. This triangulation approach combining the quantitative analysis (i.e. opinion survey on the selected SWOTs) and the qualitative analysis (i.e. representative case studies) gives a unique insight into the selection of an optimal PPP business model and strategy planning for market entrance or expansion. The survey results from the selected 11 SWOTs explain that some features are highly applicable to real projects (namely the Tier 1 and 2 SWOT factors), whereas others (namely Tier 3 SWOT factors) require the user's discretion. In detail, our assessments based on the VR and ID indicate the emergence of a strong consensus between interviewees regarding bid premium, financial burden, and bidding method in TOT and fixed-return provisions, operational management efficiency, majority control, and equity transfer proportion in divestiture. The preference of local governments for TOT and divestiture models to, for example, relieve their financial burden, maintain management control, and enhance operational efficiency may also boost the utilisation of the models in the market. In the divestiture model, the avoidance of an insistence on fixed-return provisions may help guide private investors through the strict internal investment guidelines while securing a greater potential for profits by engaging in both the operation and distribution sides. However, it is our opinion that foreign investors should be flexible in interpreting the SWOT factors and respond them at the solution level in a project-specific environment. For example, with regard to high premium issue in TOT and divestiture models, our finding is that most of the project with that problem involved seemed to be highly profitable ones or have strategic importance in creating new business opportunities. From a different perspective, we should also acknowledge that any hostile bid or the highest bid might lead to ‘Winner's Curse' type situations in which private service provider strives to raise the rate as much as possible. Our evaluation on the high bid premium issue does not imply that TOT and divestiture models systematically cause such upward bias of tender prices always. In a similar fashion, with regard to industry development issue, adopting more TOT projects in a region severely short of wastewater treatment capacity could be a driving force for economic development in that region in spite of the lack of consensus on the issue as found in our opinion survey. The excessively high premiums, inadequacy of the asset evaluation system, transfer of the labour restructuring burden to the private investor, difficulty of tariff adjustments under the cross subsidy payment structure, inconsistent application of the equity transfer rate, and fundraising-oriented bidding methods have not been closely studied in international PPP literature. Future research needs to embrace those issues in a more concrete way and delineate the optimal mid- and long-term market penetration or expansion strategy plans based on the SWOT identified. The extended implication is that the Chinese government can supplement the identified weaknesses and threats to establish a more solid legal and regulatory environment by which it can attract private investment in the water sector. Moreover, third countries may reference those SWOT factors when constructing an institutional framework for adopting a range of PPP models in their market, as demonstrated by the Chinese water sector.