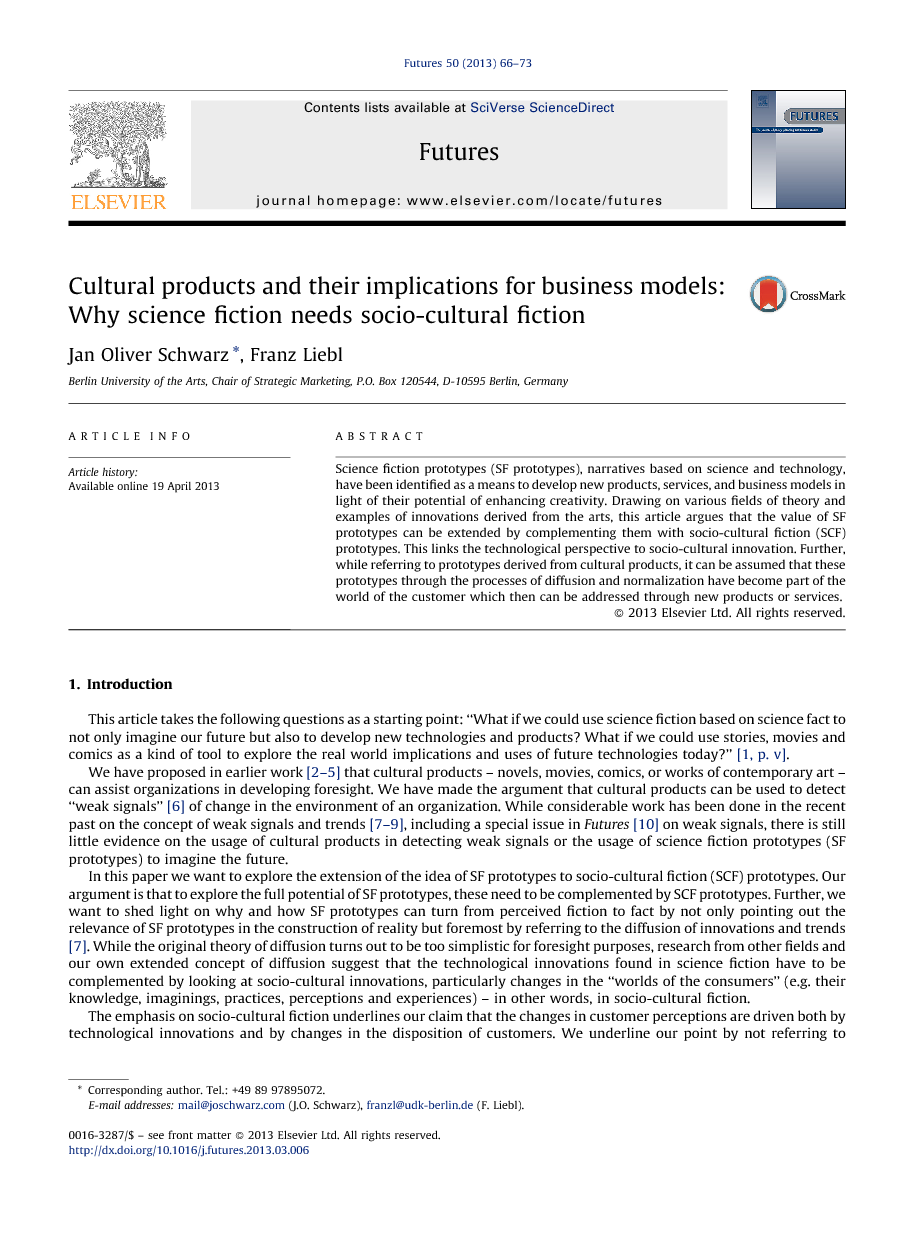 Science fiction prototypes (SF prototypes), narratives based on science and technology, have been identified as a means to develop new products, services, and business models in light of their potential of enhancing creativity. Drawing on various fields of theory and examples of innovations derived from the arts, this article argues that the value of SF prototypes can be extended by complementing them with socio-cultural fiction (SCF) prototypes. This links the technological perspective to socio-cultural innovation. Further, while referring to prototypes derived from cultural products, it can be assumed that these prototypes through the processes of diffusion and normalization have become part of the world of the customer which then can be addressed through new products or services.

This article takes the following questions as a starting point: “What if we could use science fiction based on science fact to not only imagine our future but also to develop new technologies and products? What if we could use stories, movies and comics as a kind of tool to explore the real world implications and uses of future technologies today?” [1, p. v]. We have proposed in earlier work [2], [3], [4] and [5] that cultural products – novels, movies, comics, or works of contemporary art – can assist organizations in developing foresight. We have made the argument that cultural products can be used to detect “weak signals” [6] of change in the environment of an organization. While considerable work has been done in the recent past on the concept of weak signals and trends [7], [8] and [9], including a special issue in Futures[10] on weak signals, there is still little evidence on the usage of cultural products in detecting weak signals or the usage of science fiction prototypes (SF prototypes) to imagine the future. In this paper we want to explore the extension of the idea of SF prototypes to socio-cultural fiction (SCF) prototypes. Our argument is that to explore the full potential of SF prototypes, these need to be complemented by SCF prototypes. Further, we want to shed light on why and how SF prototypes can turn from perceived fiction to fact by not only pointing out the relevance of SF prototypes in the construction of reality but foremost by referring to the diffusion of innovations and trends [7]. While the original theory of diffusion turns out to be too simplistic for foresight purposes, research from other fields and our own extended concept of diffusion suggest that the technological innovations found in science fiction have to be complemented by looking at socio-cultural innovations, particularly changes in the “worlds of the consumers” (e.g. their knowledge, imaginings, practices, perceptions and experiences) – in other words, in socio-cultural fiction. The emphasis on socio-cultural fiction underlines our claim that the changes in customer perceptions are driven both by technological innovations and by changes in the disposition of customers. We underline our point by not referring to “classical” science fiction, with a strong focus on future technologies. Instead we refer to cultural products, especially art projects and literature, which would not necessarily be labelled as science-fiction but which can contain interesting prototypes. We will start by discussing the relevance of cultural products for SF prototyping. This discussion will be followed by elements of an elaborated theory of diffusion. In the remainder of the paper we will describe how the concept of Locative Art, taken from William Gibson's [11] novel Spook Country, not only relates to the technology of Augmented Reality but foremost points out to future applications and socio-cultural practices that, in combination, will give rise to new business models.

Drawing on various streams of theory, we have argued that SF prototypes taken from cultural products are not only valuable because of sparking creativity in an organization. They are further valuable because of their potential of becoming part of the construction of reality of consumers through the process of diffusion and normalization in a society, eventually having the potential to being embedded into the worlds of the customers. We have referred to art projects and a combined SF/SCF prototype from a novel to demonstrate that by extending SF prototypes to SCF prototypes the technological perspective and the socio-cultural perspective are brought together, representing future worlds of the consumers. The latter is important, as socio-cultural innovation is an important aspect in creating innovative business models. This idea was already expressed by Johnson [1, p. 3] when he stated that the goal of SF prototyping is to “start a conversation about technology and the future”. He adds: “It is a way to expand the dialogue to include artists, designers and the broader public” [1, p. 121]. Thereby the discourse is not limited to issues of technology but rather becomes a discourse about society and culture in general. With respect to the individual organization, the discourse becomes a “strategic conversation”, a term that has already been used in a context of scenario planning [44]. If we extend this line of argument, it is obvious that narratives taken from contemporary art and other products of cultural originality can serve several purposes in an organization, from enabling conversation over a future strategy to fostering conversations about new products and services while providing lively user scenarios.